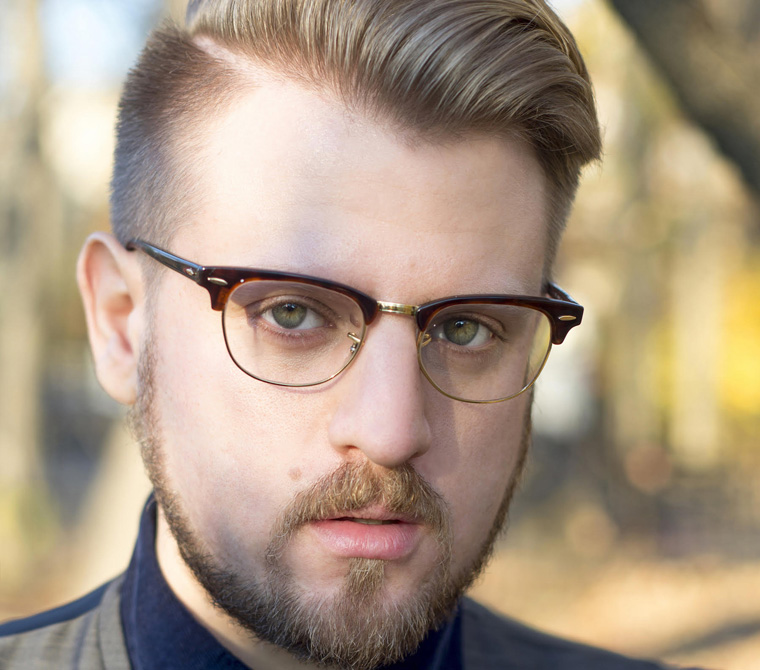 Some singers delight in covering a song. Dominick Corbacio has been known to premiere one, and to make it the definitive version, at that.

The 2008 Bishop Ludden Junior-Senior High School graduate is building a singing career in the genres of opera, oratorio, and art song. He has already been praised in the New York Times.

Corbacio, 26, who is originally from Mattydale, started out singing in the Syracuse Children’s Chorus. As he grew up, he performed in the Bishop Ludden musicals and Select Chorus. He also served as a cantor, keyboardist, and music director in the Diocese of Syracuse.

“I want to travel the world doing what I do,” he said. “My main goal is to be the most relatable storyteller that I can be.”

On Saturday, July 23, Corbacio’s musical storytelling was so impassioned that it elicited tears in the Society for New Music’s Cazenovia Counterpoint Festival at the Route 20 Sofa Company, decorated with large paintings and overhung with pastel umbrellas. After spending the summer singing for Saratoga Opera, Corbacio was a little closer to home.

Showing that he retains that old Gaelic Knights fire from his Ludden days, Corbacio started by singing an art song, defined as a recital tune with piano accompaniment, called “Endings and Beginnings.” It is about the circle of life in the family of its composer, Diane Jones, a WCNY-FM host who recently conducted a live interview with Corbacio and Dems on her program.

Corbacio is not just a tenor. To Jones, he is a touchstone in the way her song should be sung. “I was in tears,” she said. “Hand me a handkerchief.”

“I thought it was absolutely phenomenal,” she added. “And it’s fun because I first heard it in 2009 when he premiered it. And as an 18-, 19-year-old boy he did a beautiful job. But, a young man’s job.

“And seven years has just brought him such a maturity, not only in technique and voice, but in experience. … I’m so proud of him for this and I’m so glad.

“I feel like it’s his piece. I mean, he’s really kind of owned it. Everybody’s going to have to compare to Dominick when they sing this for me.”

Next he sang composer Ben Moore’s piece “Dear Theo,” which consists of seven songs based on the first English translation of letters that the artist Vincent van Gogh wrote to his brother.

The program material says that van Gogh was “little appreciated during his lifetime.” His letters, as interpreted by Moore, depict a van Gogh yearning for success, hanging onto hope, and bursting with affection for his brother.

Moore, who grew up in Clinton, was out of the country for Saturday’s recital, but his parents, Dr. Roger and Joanna Moore, and his sister Elizabeth were in the audience.

Dr. Moore, a family physician in Clinton for 50 years, said he was almost in tears with Corbacio’s finesse.

“This was just incredible, and his voice was just astounding,” said Stephen Carpenter, a member of the board of directors for the Society for New Music, which is based in Syracuse.

“There were a couple of times when you got that sense of anguish in his voice: very difficult to do with a voice, when you stop and think about it, but he’s trained in opera.”

Corbacio said he usually is delirious after a performance. But channeling the feelings of a brilliant painter can be exhausting.

“I was definitely tired after this one,” he said, “given the emotional nature of the pieces that were on the program.”

He added that it was “such a pleasant surprise that Ben’s parents came out to hear me sing his piece. I was humbled by that for sure. … It always adds something special to a performance when you have someone listening who is directly connected to what you’re doing, whether it be the composer herself [Diane Jones] or the composer’s parents.”

The tenor’s own parents, Donald and Josephine, were also in the audience, as well as his grandparents and his great-aunt. His younger brother, Anthony, also a Bishop Ludden graduate, would have attended but he is working in New York City this summer.

Dominick appreciates that his family has always encouraged his career in music. After attending Bishop Ludden from 2002 to 2008, he spent 2½ years at the Eastman School of Music in Rochester. Then he served as the music director at Divine Mercy Parish in Central Square in 2012. He continued his music studies at the Manhattan School of Music from 2013 to 2015.

Next up for Corbacio is a salaried position as a Young Artist with Florida Grand Opera. Young Artists is a development program for budding careers. Corbacio got the gig, which runs for the nine-month season, by auditioning in New York City. The program’s website says it accepts up to 12 singers out of more than 600 applications every year.

“We sing roles on the main stage,” Corbacio said. “We also study, get coaching. It’s the beginning stages of launching a successful operatic career.”

In “Dear Theo,” van Gogh writes, “I must leave a souvenir.” Asked what artistic souvenir he would leave, Corbacio said:

“It’s hard to ‘leave something behind’ as a musician other than a recording, and that’s not the same. So if I can leave behind a legacy of dedication to storytelling, that’d be the thing.”

Videos and photos from Dominick Corbacio’s performance in Cazenovia can be found at www.thecatholicsun.com. Audio clips are also available at his website, www.dominickcorbacio.com.

Favorite composer at the moment: Robert Schumann. “The cycle he wrote, ‘Poet’s Love,’ I’ve felt exactly what he felt at one point in my life and it feels great to perform.”

Favorite style of opera: Bel canto. “It means ‘beautiful singing’; comes from Italian school of opera. That typical opera sound you hear, that is bel canto.”

Favorite place he’s  performed: “The Metropolitan Museum of Art, for sure.”