Ludden’s Oscar Vergara is Coach of the Year again 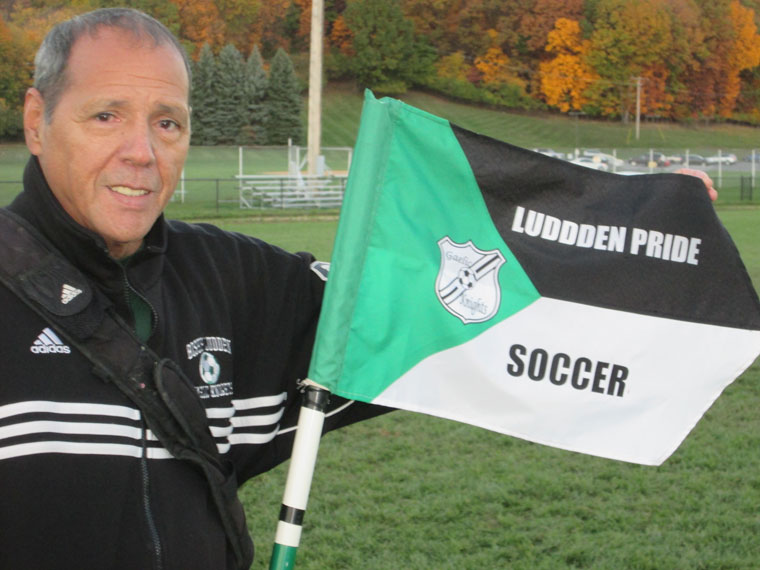 For once, don’t listen to the coach. Ignore his eyes; they’ll deceive you. But watch for the last-second twitch of his hips; otherwise, he’ll put the soccer ball right behind you, into the goal.

Every trick of a lethal shooter of penalty kicks resides in Bishop Ludden High School boys varsity soccer Coach Oscar Vergara, who started playing the game at age 5. A rival kidded him recently that, in his 60s, Coach “V” is a dinosaur. But dinosaurs had strong legs, didn’t they?

Coach Vergara’s frisky style of coaching — he’ll take a kick himself instead of just striking a majestic pose at practice — paid off this year. His team went 16-3-2 and won the sectional title, and he was named the National Soccer Coaches Association of America New York State Private/Parochial School Coach of the Year. He also won the award in 1996 and 2009.

He did all that while demanding from his players not victories, but sportsmanship, fair play, dedication, dignity, graciousness, and good citizenship. “And I’m going to demand that you don’t do any wild things,” he said, “no partying during the season.” His team even attended Mass before some games.
“We’re very lucky to have Oscar Vergara as our boys soccer coach,” Ludden Athletic Director Gallagher Driscoll said in a voicemail. “He’s been doing it a very, very long time here. He’s an institution to the game of soccer. Besides coaching our kids, he does a great job of instilling life skills, holding them accountable for their actions, and holding them accountable to be great teammates and great citizens along the way. … He deserves this [award].”

The season’s highlight was the Section 3 Class C championship, when the Gaelic Knights defeated Mount Markham 2-0. The goals were scored by Cam Kaminski and Lucas Scutari; making five saves was Ludden goalie Peter Lockwood. It was the last game of Mount Markham coach Charlie Engle’s career. Between them, Coach Vergara figures, the two coaches have almost 1,100 wins. He told Coach Engle that after 42 years, he may be following him into retirement very soon.

But it sure was fun this year. At Ludden’s Nov. 4 practice for the state regional game, the air temperature was 48 degrees and the strong west wind added spin to the ball as the players, oblivious to the cold, sent it airborne. Although it was not the stuff of Coach Vergara’s native Colombia, the late-afternoon sunlight sufficed. The twin arms of the football goalpost projected long shadows that suggested a referee signaling a goal. It was time to electrify practice.

Coach “V” placed the ball at the penalty-kick (PK) “X,” 12 yards in front of the goal. The red “X” was mostly scuffed up, replaced with muddy pockmarks from soccer cleats.

Starting goalie Lockwood, the brilliant senior, stood waiting. His legs were already caked with dirt, having dived to stop many shots. This is the kid, Coach Vergara said, who “allows me to sleep better. I don’t have to worry about him. He has three things going for him: He’s got height, which I can’t teach. He’s 6-2, I can’t teach that. He’s got agility, and he’s got a love attachment for the game. If he could, he would stay here all night long practicing stuff. Sometimes you have to kick him out of the field: ‘Just go home. Go home, Peter.’”

When the game is reduced to a PK, soccer is simply moxie and talent. With Oscar Vergara, the talent is a bit seasoned, the moxie laced with mischief.

What happened next was an expression of Coach Vergara’s close attention to Colombian soccer legend “El Pibe” (“The Kid”) Valderrama. “El Pibe” sports golden curls like miniature Portuguese men-of-war arranged in a bundle. Coach Vergara sports considerably less hair under a watch cap that a player gave him.

Deliberately, the coach took a couple of steps. With startling ferocity, his right foot compressed the ball and sent it on a low line far to the goalie’s right, into the corner of the net.

Two lessons that Coach Vergara teaches the players are “Stay cool” and “You’ve got to have class.” Lockwood, who already possesses composure, merely smiled. “I just say, ‘It always happens,’” he said. “He always scores on me. … He always puts it bottom corner on me. There’s no way to defend it.”

It was yet another nod to the coach’s career at Ludden, a place where he has always stayed for this reason: “They saved my life. So I will forever be indebted to Bishop Ludden.”

As he paused to explain, energetic Assistant Coach Chris Melfi, himself a former Ludden soccer player, kept the practice flowing. When defender Kaminski curved the ball on a high corner kick, everyone admired it.

Coach Vergara’s entire life seemed up in the air in 1972. At age 17, the future coach left Colombia, where he played soccer virtually every day, and arrived in Syracuse on the evening of Friday, March 3. Not accustomed to the ice and snow, he fell three times that night. He figured: “What a way to start my new life.” On the following Monday, his brother drove him at 7:30 a.m. to Bishop Ludden. Bishop Thomas J. Costello, who was then a Monsignor and the Superintendent of Schools, had awarded him a scholarship based on his need to get out of an at-risk environment in Medellin.

At the time, Coach Vergara’s knowledge of English consisted of “Hello,” “My name is,” and “Goodbye.”

“And I walked through the main door and I was scared,” he recalled. “I was petrified. …  And then I see these guys; I was looking at some of the football players here and I go, ‘My gosh, they’re giants!’ And I was scared, you know. Not only [because] I’m a new kid in the school, but I’m kind of small, I claim to be 5-8 at that time, and I’m looking at this huge guy. I’m so scared.

“But the Lord helped me get through it, and I finished at Ludden that year, and I came back the following year in order to polish my English and get my high school diploma, and I tell you what:

“If I had to do it all over again, this is where I will be: at Bishop Ludden.”

Most of his 42 years of coaching soccer have been with the Gaelic Knights. He has four daughters: Adriana, Amanda, Andrea, and Alisa. Varsity athletes, they all graduated from Ludden too. Because he was so dedicated to the squad he was charged with coaching, their father missed 75 percent of  their soccer games.

“My youngest grandson is nine years old,” he said, “and he’s quite the ballplayer. … And I don’t want to miss my grandson’s games. … And I would love nothing more than to have one of my former players become me in the future. You know: take over for me.” Assistant Coach Melfi, one of his former players, has been with him on the sidelines for three years now. “He’s there for the kids. … He’s very good,” Coach Vergara said.

Coach Vergara sees their job as mentoring, and he brings that quality to his other job as Program Director for Big Brothers Big Sisters of Onondaga County. He also runs Project Smiles, which collects gently used clothes, shoes, school supplies, stuffed animals, and other items to give to underprivileged children in his hometown of Medellin at Christmastime.

His soccer players serve as Big Brothers to students at McKinley-Brighton Elementary School and Most Holy Rosary School. “They get together, they talk about life, they do homework. So it’s a win-win,” he said.

Ludden’s season ended in a 1-0 loss to Section 4 champion Lansing in the state regional final game. Lansing, which won on a rebound goal, was on a mission: A member of the coaching staff had died in the preseason.

“We played hard but we played clean,” Coach Vergara said.

He stayed upbeat with his team. “I feel awfully proud of these guys the way they went about their season,” he said. He credited his seniors for “really being leaders out there.”

Coach Vergara imitates “El Pibe” but is more like “El Eterno”: The Ageless, ever active at the penalty-kick “X.”

And that goal he scored in practice?