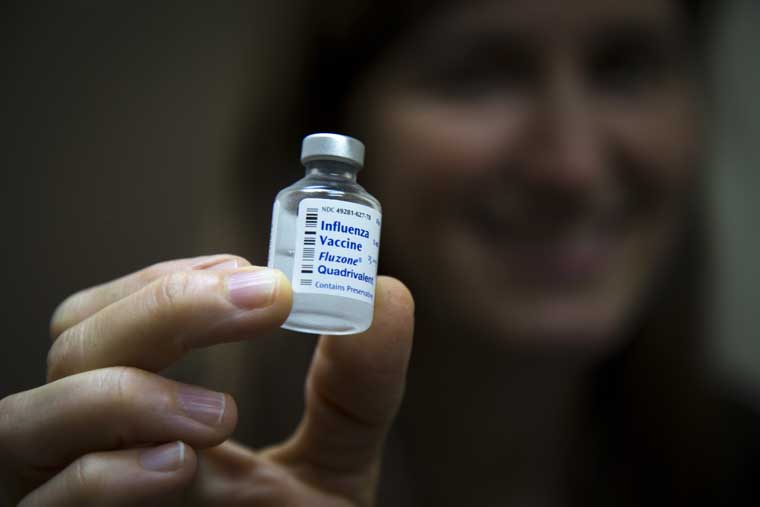 Editor’s Note: here in the Diocese of Syracuse, Bishop Cunningham would like to remind parishes (and faithful) of the following: if you are feeling ill or are concerned about others who are ill, refrain from the Cup and the sign of peace. Eucharistic Ministers – please use hand sanitizer before and after Communion. Most importantly, if you are ill, please stay home until you are feeling better.

WASHINGTON (CNS) — The nationwide flu outbreak has prompted dioceses to take steps to suspend traditional rituals to prevent the spread of the virus as much as possible.

From encouraging a simple nod or a smile during the sign of peace to draining holy water fonts, the actions come as the flu sweeps through virtually every corner of the country in the worst outbreak of the disease in nearly a decade.

The Centers for Disease Control and Prevention reported Jan. 26 that most people are being infected with the influenza B, or H3N2, virus. Tens of thousands of people have been hospitalized since Oct. 1, the start of the flu season.

The U.S. Conference of Catholic Bishops maintains a page on its website devoted to the liturgy and influenza. It offers information about the flu as well as how to prevent the spread of any disease at liturgy.

The page can be found at http://bit.ly/2nuetHf.

Meanwhile, Bishop Edward C. Malesic of Greensburg, Pennsylvania, advised parishioners not to shake hands during the sign of peace and stopped the use of consecrated wine during Communion.

Across the state in Allentown, the diocese implemented similar restrictions. Diocesan spokesman Matt Kerr told local media the practice occurs most years during the flu season.

In the Diocese of El Paso, Texas, Chancellor Patricia Fierro sent a memo to all parishes asking clergy and others to practice proper hygiene during the flu season. The diocese also asked sick parishioners to refrain from drinking from the cup during holy Communion.

“When you take Communion, you’re taking the body and the blood of Christ, so even if you only receive the host and not the precious blood you’re still receiving Communion,” she said.

A posting on the website of the Diocese of Rochester, New York, outlined four protocols to be observed for the celebration of Mass at all faith communities.

Father Paul J. Tomasso, diocesan vicar general and moderator of the curia, said Jan. 24 that parishes should regularly drain holy water fonts and clean them with disinfecting soap. The old holy water should be disposed of in a sacrarium, or special sink.

Other guidelines include distributing Communion without sharing the chalice; sharing the sign of peace without a handshake; and the cleansing of all vessels used at each Mass with hot water and mild soap.

Similar measures were implemented by Bishop Robert P. Deeley of Portland, Maine, after he reviewed reports about influenza from state health authorities.

The bishop urged parishioners who are sick to stay away from church gatherings and reminded them that they are not obligated to attend weekly Mass when ill. Parishioners also were urged, but not required, to receive Communion in their hand rather than on their tongue. Priests were advised to be careful not to touch the tongues or hands of communicants.

Throughout January, numerous dioceses have outlined similar measures on their websites.

Beyond looking out for the welfare of church members, Catholic agencies are addressing how the flu epidemic is affecting other groups.

The homeless are particularly vulnerable to the flu and organizations who work to protect this population are taking extra efforts to shield them from a potential outbreak, said Augustine Frazier, a senior program manager for the homeless at Catholic Charities of the Archdiocese of Washington.

Catholic Charities also provides frequent medical clinics for the homeless at their facilities where flu shots are always offered, he said.

In addition to being more exposed to the elements during winter, the homeless frequently have compromised immune systems, often miss taking their medications, don’t have adequate warm clothing and often sleep in shelters with hundreds of other people who may be sick, said Dr. Catherine Crosland. She is director of homeless outreach development for Unity Health Care Inc., a Washington-based organization that was providing a medical clinic at Catholic Charities’ Adam’s Place homeless shelter and day resource center.

Crosland gave the flu shot to dozens of homeless men and women during the Feb. 1 clinic day.

“Especially in the homeless population (it’s beneficial) that the more people who get vaccinated the less likely we are to have an outbreak and that is part of something called herd immunity,” she said. “It’s not necessarily the one by one case, but in a group of 100 people, if half of the folks are vaccinated, you have less likelihood of there being an outbreak.”

To date, Dr. Daniel B. Jernigan, director of the Influenza Division in the National Center for Immunization and Respiratory Diseases at CDC, said the agency had not yet compiled the total number of flu deaths, but he noted that 53 children had died.

Based on statistics compiled from previous influenza outbreaks, the agency expects about 710,000 hospitalizations by the end of flu season in mid-May, according to a transcript from a conversation about the flu epidemic on the CDC website that Jernigan joined.