Many migrants surprised to find long wait to apply for asylum in U.S. 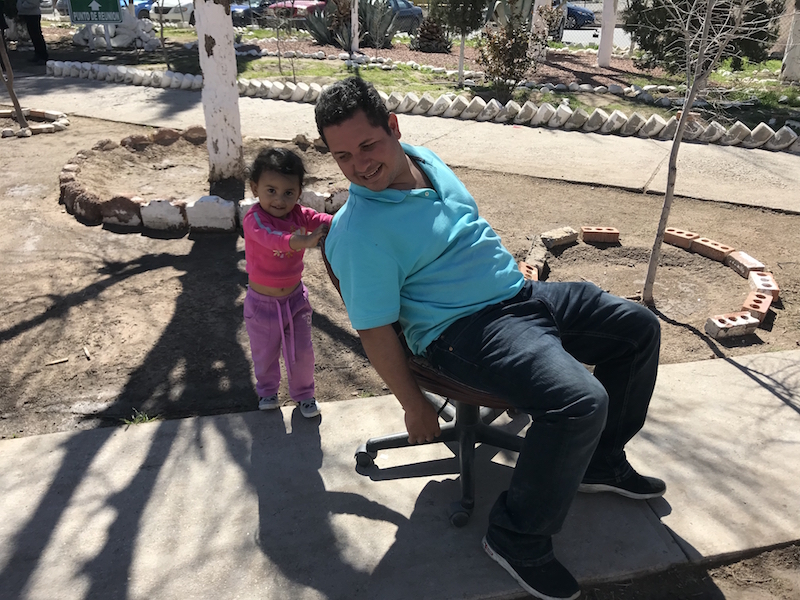 Rodny Pineda plays with his niece, Eliza Funes, 2, at the diocesan migrant shelter in Ciudad Juarez, Mexico, Feb. 28, 2019. The pair, along with Eliza’s mother, hope to apply for asylum in the United States, but must wait weeks to do so. (CNS photo | David Agren)

CIUDAD JUAREZ, Mexico (CNS) — A trio of Honduran migrants arrived at the diocesan migrant shelter in this Mexican border city in the predawn hours, hoping to rest up before approaching the U.S. border and making an asylum claim.

They received a rude surprise, however: More than 1,500 migrants already were waiting to apply for asylum in the U.S., and they were required to register their names on a waitlist managed by the shelter.

“We didn’t really know it would take so long” to apply for asylum, said Rodny Pineda, 27, who fled Honduras with his sister-in-law and niece, 2, after his brother was murdered by gangsters in San Pedro Sula.

“It’s complicated” — applying for asylum and waiting in Ciudad Juarez — “but we don’t really have a choice,” said Magda Flores, 30, Pineda’s widowed sister, who ruled out returning to Honduras. “It was never our idea to leave the country. It was a question of security.”

Migrants like Pineda and Flores are arriving in ever-bigger numbers in Mexican border cities like Ciudad Juarez with hopes of applying for asylum in the United States.

But such migrants are bumping up against an increasingly fortified border, along with long wait times for applying — the consequence of “metering,” a practice in which U.S. officials accept only small numbers of asylum-seekers per day for processing.

In El Paso, which neighbors Ciudad Juarez, fewer than 50 asylum-seekers are allowed to cross on the daily basis and make claims, according to shelter staff.

The metering policy has caused complications in Ciudad Juarez, where shelters cannot handle the crush of migrants and city officials have been caught by surprise.

U.S. President Donald Trump has declared an emergency to free up funds for building a wall on the U.S.-Mexico frontier, citing a crush of migrants — many fleeing violence, poverty and drought in Central America — at the southwestern border.

The U.S. government also expects to expand a pilot project known as Remain in Mexico, in which asylum-seekers are returned to Mexico as their cases are heard in U.S. courts. U.S. Customs and Border Protection has reported detaining a record number of migrants traveling as families during the first five months of its 2019 fiscal year, which began in October 2018. The 136,150 arrests surpassed the figure for all of the last fiscal year.

But shelters in Ciudad Juarez — run by Catholic and evangelical churches — have already filled up. The municipal government, meanwhile, has opened its own shelters. All of the shelters are scrambling to serve the migrants arriving.

“We can’t attend to everyone in a dignified way,” said the Rev. Juan Fierro, a Methodist pastor and director of the “Good Shepherd” shelter. “They’re sleeping shoulder to shoulder.”

Rev. Fierro posted a sign outside, saying space was full. Civil protection authorities had warned him of overcrowding concerns with his housing 200 mostly Cuban asylum-seekers, when normal capacity is 60 people.

The Cubans arriving at the Good Shepherd shelter planned to apply for political asylum, citing repression at home. But they also sought family reunification, as most had close relatives already living in the United States.

They had not considered waiting in Ciudad Juarez an option, although it was a possibility under Remain in Mexico.

“If this policy happens, it would be a suicide for us,” said Yuri Rodriguez Ordonez, 22, who sold his home in Cuba to finance a trek through South and Central America to the U.S. border.

Some migrants head to Ciudad Juarez — once the murder capital of the world, though calmer in recent years — figuring it’s safer than most cities on the border, even if the murder rate has risen recently.

“I heard it was quieter here, that there were opportunities to cross the border,” said Jonathan Barrio, 25, a Honduran who left with one of the caravans in the fall.

“You still feel a little intimidated that you made this trip and they could still reject you” at the U.S. border, he said.

Pineda and Flores opted to try traveling through Ciudad Juarez after receiving a tip from a fellow migrant that the city might be a better bet for crossing the border.

They registered on the asylum waitlist upon arriving and were given pink bracelets with the numbers 7,332, 7,333 and 7,334. A pair of asylum-seekers from Nicaragua arrived after them, along with a family from Mexico’s southern Guerrero state, where disputes over drug production have sent families fleeing.

Later in the afternoon, 15 asylum-seekers had their numbers called, including a Cuban with 5,722 written on his wristband. He had waited 16 days for his turn and said there were 721 people ahead of him when he arrived. That number had swollen to more than 1,500 by Feb. 28.

“It used to be a different kind of migration,” with Mexican deportees or migrants resting up before making a final push to the border, Father Calvillo said.

The situation changed in September 2018, he said, as asylum-seekers arrived at the bridge over the Rio Grande and started camping out as they awaited admission into the United States to make their claims.

“The state and municipal governments grabbed these people and brought them to me,” Father Calvillo recalled. He subsequently started the wait list, and Mexican immigration officials fetch the people from the shelter whose number is called.

“Juarez is now turning into a place to seek political asylum,” he said.

Staff at the shelter expressed concerns over the local reaction of so many asylum-seekers being forced to wait for months to make their claims in the United States and possibly as their cases are heard in U.S. courts.

Sister Maria Guadalupe Velasco, a shelter volunteer, called Ciudad Juarez “hospitable” as thousands arrive in the city from other parts of Mexico in search of employment in the maquiladoras (factories for export) where jobs are abundant.

But, she worried, “There’s been a lot of negative information against this exodus of migrants in the media. And people believe it.”