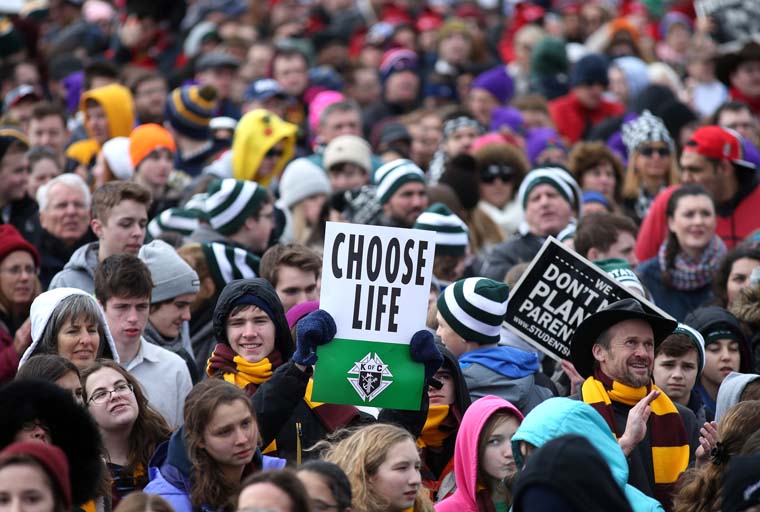 WASHINGTON (CNS) — March for Life organizers announced in a Dec. 6 briefing a tentative group of speakers, a theme and other details for a Jan. 18 conference and expo and Jan. 19 march and rally in Washington.

“Love saves Lives” is the theme of the 2018 march, said Jeanne Mancini, president of March for Life, adding that the group also wants to focus on the sacrifice involved with bringing life into the world but also in the interactions with one another.

One of the speakers who will talk about that during the event is Pam Tebow, mother of former football player Tim Tebow, said Mancini.

“Her story for choosing life for Timmy is beautiful,” Mancini said. Tebow’s doctors told her she had to have an abortion to save her own life, but she refused and delivered a healthy boy.

Another person who will share her story is Kelly Rosati, a March for Life board member, who has adopted four children previously in foster care, Mancini said.

She said the organization also wants to provide a focus for the work done by pregnancy centers and maternity homes that help women who find themselves in an unplanned pregnancy.

“Those homes are totally about providing resources for women facing unexpected pregnancies and they’re often given a bad rap,” she said.

A day before the rally and march the March for Life organization will host a conference and an expo, as well as a session with instructions on how to track legislators’ votes and provide “tools to lobby.”

Because the National Park Service has a refurbishing project that makes it too expensive to be on the grounds of the Washington Monument, the noon march, the main event on Jan. 19, will begin instead on the National Mall between Madison Drive and Jefferson Drive in Washington she said, and then will proceed down Constitution Avenue. The march will head toward the U.S. Capitol and then proceed outside the Supreme Court of the United States.

Congressmen Dan Lipinksi, an Illinois Democrat, and Chris Smith, a Republican from New Jersey, have confirmed their attendance, Mancini said.

“The March for Life is nonpartisan, or bipartisan, we’re also nonsectarian, we always try to get people from both sides of the political aisle to speak at the March for Life,” she said, adding that it’s not always an easy task.

The March for Life also has invited White House officials to speak, she said, but gave no indication of whether they would attend. Vice President Mike Pence spoke at the event last year.

The organization has a full list of events here.