Mass celebrates married life as a ‘path to holiness’ 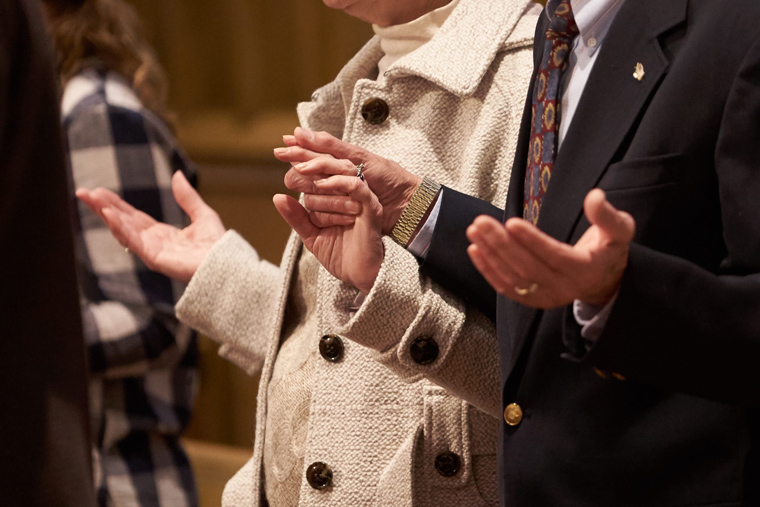 Love was in the air Feb. 7 as married couples from across the diocese gathered at the Cathedral of the Immaculate Conception for the annual World Marriage Day Mass.

Sponsored by the Office of Family Life Education, the Mass specially recognizes couples marking milestone anniversaries and offers all married couples an opportunity for renewal of their marriage vows.

Bishop Robert J. Cunningham celebrated the Mass, offering in his homily words of congratulations and encouragement to the couples.

He began by telling the story of Ss. Louis and Marie Zelie Martin, the parents of St. Therese of Lisieux, who were the first married couple to be canonized together on Oct. 18, 2015. Though professionally successful, their family lives were not without trial: Four of their nine children died in infancy. But neither bereavement nor trials weakened their confidence in the goodness of God’s plan, Bishop Cunningham said. They lived simply and lived out their faith. Though both once considered the religious life, God had other plans for them.

“Louis and Zelie understood that they could become holy, not in spite of marriage, but through, in, and by marriage,” Bishop Cunningham said. “By their married lives they witnessed to one of the main insights of the Second Vatican Council: The council affirmed that everyone is called to holiness; all the faithful of Christ are called to the fullness of Christian life and perfection of charity.” Married life is a path to holiness, the bishop affirmed.

Noting that there is “a cultural misunderstanding about marriage today,” Bishop Cunningham commended the couples present for standing firm in their lifelong commitments of fidelity.

“Love for another person can be challenging, even strenuous. Love for another is easy as long as it is an abstraction, far removed from the monotony of everyday life. But despite the ups and the downs that come into every life, you have been faithful, day in and day out, year after year, to the promises you made on the day of your marriage,” he continued.

The couples’ lives “clearly proclaim that it is possible to say yes forever,” Bishop Cunningham said, and remind us “that all of this is possible because God has been with you. He has been and continues to be the unseen partner in your marriage. You have given us true witness to the covenant of marriage and we’re grateful for your example of married love and lifelong commitment.”

Following the renewal of vows, Bishop Cunningham personally presented each couple celebrating 25, 50, and more years of marriage with certificates.

Gloria and Richard Peterson, parishioners of St. Joseph’s Church in Deposit, were among some of the longest-married couples in attendance at the Mass. The couple, who first met at the rollerskating rink, will mark 70 years of marriage this November. Parents of five children, the Petersons now have 17 grandchildren and 19 great-grandchildren. The key to a long, happy marriage? “Trust in God,” Gloria said in a phone interview with the Sun before the Mass.

Cynthia and Richard Cherny, married 28 years, are parishioners of St. James in Cazenovia and parents of six children. Cynthia said the keys to marriage are good communication and putting God at the center. She also stressed the importance of family, friends and faith. “You can’t do marriage alone,” she said. Also important to understand? “Love is not a feeling. It’s an action word,” she said.

Mary’s advice for a long, happy marriage is “to be happy with each other and agree,” she signed, with Jennifer Wissman, who interpreted the Mass, interpreting for the Sun. Though sometimes they disagree, they never fight, Mary said, adding, “we have a beautiful marriage.”

Robert concurred with his wife’s advice, also signing that couples should kiss every morning and every night.