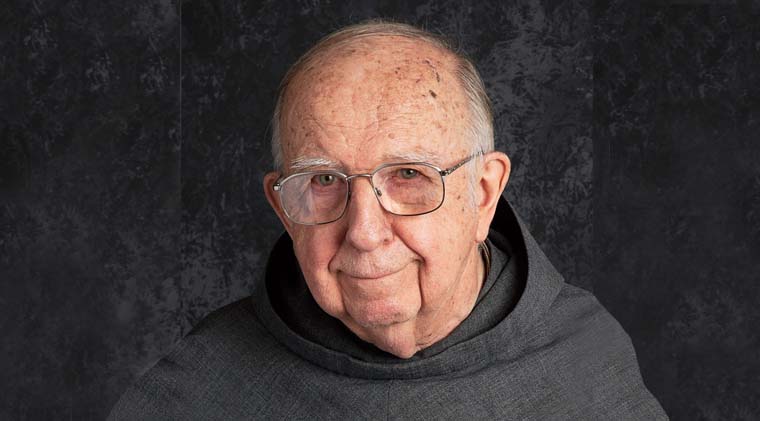 The life and ministry of Father Jeffrey Keefe, OFM Conv., were remembered May 16 as his Mass of Christian Burial was celebrated at the Franciscan Church of the Assumption in Syracuse. Father Keefe passed away May 11 at the age of 89.

Father Keefe professed his Franciscan vows on March 17, 1946, and was ordained to the priesthood on June 7, 1952. He received a Licentiate of Sacred Theology in 1952 and an M.A. (Ed) in 1955 from The Catholic University of America. He received his Ph.D. in clinical psychology from Fordham University in 1965.

Father Keefe’s province, Our Lady of the Angels, enumerates among his ministries the following: teaching at Trenton Catholic Boys High School, St. Francis Preparatory Academy, and St. Anthony-on-Hudson Seminary; offering vocation evaluations and assessments for his order as well as numerous other religious communities and dioceses; serving on the training staff for the Onondaga Pastoral Counseling Center, the Tribunal of the Diocese of Syracuse, and as the director of the Personal Resource Center under Catholic Charities in Syracuse; and working with Courage, a spiritual support group for Catholic men and women who are striving to live chaste lives in accordance with the Catholic Church’s teaching on homosexuality. The province also notes Father Keefe was published as a contributor on several works and in several Catholic periodicals; he also contributed to the Catholic Sun’s Word of the Lord column. Father Keefe was Emeritus Spiritual Director of Our Lady of Lourdes Hospitality North American Volunteers.

Father Jobe Abbass, OFM Conv., offered the homily. Once Father Keefe’s student, Father Jobe said he held Father Keefe up “as somebody who really was an inspiration for all of us.” The two became friends over the years, he continued, and about three years ago Father Keefe asked him to preach at his funeral, mentioning that Father Keefe even provided him with an envelope of material to use, drawing gentle laughter from the crowd.

After noting Father Keefe’s academic and professional achievements, and his work with Courage and the North American Volunteers, Father Jobe recalled a recent conversation with Father Keefe. They discussed the faith and “how much faith do we need to make it to the other side?” The two ultimately agreed that it can’t be measured. “Your faith is posited or shown in everything you do from day to day,” Father Jobe said.

Father Jobe also reflected on what happened at Father Keefe’s death. Drawing on the liturgy’s first reading, Wisdom 3:1-6, 9, he said, “it’s only the foolish that think the departed are dead.” We believe that on that morning Father Keefe’s spirit was carried aloft and he met St. Peter at the pearly gates, Father Jobe continued, after a life committed to the Church, his order, and his profession. St. Peter would direct Father Keefe to the room specially prepared for him in the house of the Father, Father Jobe mused, where there’d be an armchair and a long couch, but no therapy as “it’s all eternal rest.” Father Keefe would also “concelebrate the eternal banquet,” he said, “forever praising God and thanking God” while asking a share in God’s endless love and mercy for his family, friends, and Franciscan brothers.

Father Keefe was born in Syracuse on June 11, 1926, the son of Francis and Maria (Kulas) Keefe. He is survived by his nephews and his Franciscan family. Memorial donations may be made to the Franciscan Education Burse, 12300 Folly Quarter Rd., Ellicott City, Md., 21042.

Biographical material and photo were provided by Our Lady of the Angels Province: www.olaprovince.org.