Master of the big welcome gets a dandy farewell 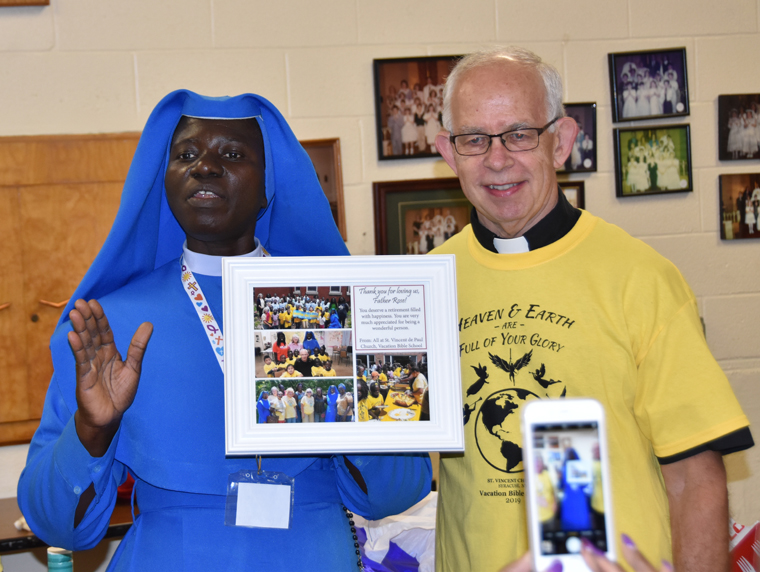 Sister Joana Baidoo seems happiest when she is booming out thank-yous.

Her joyful proclamations June 27 almost popped the balloons in the basement as she presided over Vacation Bible School’s lively farewell to Father John Rose, who retired June 30.

Father Rose served as St. Vincent de Paul Church’s pastor for seven years, during which he installed eight ceiling fans and acquired classy yellow T-shirts for Vacation Bible School. He also hosted the children at Christ the King Retreat House, and he figures that he baptized some of the kids too.

“He has retired!” Sister Joana told the room filled with 47 children plus staffers. The children come from eight or nine countries including the Republic of Burundi, Benin, Nigeria, and South Sudan; overall, St. Vincent’s Church ministers to refugees from 14 countries, and Sister Joana directs the refugee ministry.

“We want to show our appreciation to him,” Sister Joana said, “so today we are going to have lunch with Father. … He will not forget us and we will not forget him. … Father, we are very grateful to you.”

“We have to thank Sister most of all,” Father Rose said. He delivered a big “YAYYYYYY” as he responded with an exuberance of his own.

“Without Sister,” Father Rose said, “this wouldn’t happen because she works and works and works days and days, long hours ahead of time to make sure everything’s organized. So she’s the powerhouse behind all this thing. But it takes a lot of people, adults and especially you kids, so we’re very proud of all of you.”

“It’s very sad for me to leave, and I love you very much,” Father Rose continued. “And, hopefully, I’ll stop by to see you once again, OK?”

The new pastor is Father Severine Yagaza. “He’s a very nice man. He’s younger than I am,” Father Rose said.

“Some of you are going to grow up and be married and have families of your own,” Father Rose told the children, “but we hope some of you consider being a sister, like Sister Joana, because we need sisters to serve people. And hopefully some of you will be priests too, OK?

“Now, some of you are altar servers, but we need priests to serve our people also. So priests — pray about that; maybe God might call ya. Or to be a deacon.”

Father Rose became a priest on May 18, 1974. He served in other parishes in Syracuse, Mattydale, Baldwinsville, and Utica before starting at St. Vincent’s. He also ran Christ the King Retreat House and Conference Center for six years.

In his prayer before lunch at his Bible School farewell, Father Rose said: “Lord God, we ask you to bless these boys and girls and their parents and volunteers here; watch over them and protect them and make them aware of how much you love them.”

He gives a blessing “when we always go to church on Sunday,” said Aluat Tong, 7, who is going into the third grade.

“I think he’s a very nice priest,” said Fahari Kan, 8, a soon-to-be fourth-grader who pays attention at Bible School. He noted that God will “send the angels to heal you and to protect you and guide you and make you strong and brave and confident.”

Father Rose loves the refugees and their parents, Sister Joana said: “He’s always there for them. Whenever there was a need, he was there. If there’s a problem, Father is there, and he called people to come together, so that is very good.”

“He’s a brilliant man,” said Bible School staffer Patty Schmidt. “Brilliant, caring, humble. Well, all these beautiful characteristics. He’s an outstanding human being. … He has always been outreaching to the most humble here in Central New York.” 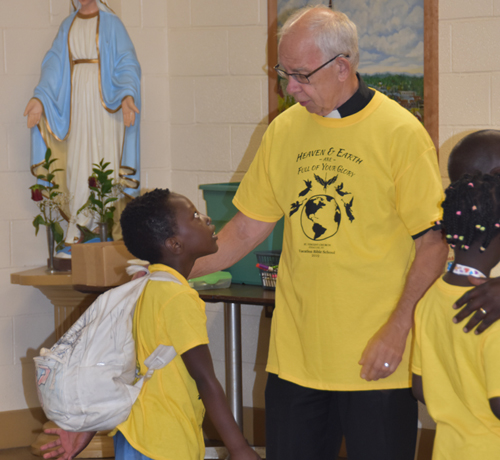 At right, St. Vincent’s Vacation Bible School attendee Fahari Kan, 8, talks with Father John Rose. “They learn about their faith, they learn about Jesus,” Father Rose says of the children.

The Rev. Terry Ruth Culbertson, the chaplain supervisor at Upstate Medical University Hospital, has known Father Rose since 1981 when he was a chaplain at Crouse Hospital. She called Father Rose “a wonderful warm, caring priest who was always there for patients, families, and staff.”

Imploring the Bible School attendees to be caring as well was Sister Jean Canora, OSF, RN, who serves as a marketer for the Saint Marianne Cope Shrine and Museum next to St. Joseph’s Hospital in Syracuse.

“When you are there enjoying your own little thing in work,” Sister Jean advised, “you’re going to always think about respect for other people and taking care of other people as Mother Marianne did. And that’s going to help you become a better person. And we’ll have a better world, if we can do that for each other, right?”

At his farewell, the Vacation Bible School staff and kids presented Father Rose with what he called “a perfect gift”: a plaque showing photos of him at Bible School events.

“I can put this in my living room,” he said, “and look on this and recall the wonderful times that we’ve had together.”

The refugee families lend a “nice vibrancy” to St. Vincent’s Church, he said. The refugees come to St. Vincent’s, he said, “seeking safety and a place where they can raise their families with an opportunity to express their faith.”

He added: “We need the kind of spirituality that they bring to our country, despite all the hardships they’ve been through. They don’t have any anger or bitterness for the suffering that they’ve experienced, but their faith is something that’s been a stability for them … and they share that faith so readily.”

The newly retired Father Rose planned to visit with his brother and sister in Vermont (“I love any part of New England”). When his summer vacation ends he will continue to work at the Spiritual Renewal Center at All Saints Church in Syracuse, training spiritual directors, doing some retreats, and helping out on weekends for parish priests who go on vacation.

They always do something special at Vacation Bible School. On this day, it was about St. Marianne Cope, guardian angels, and the booming farewell to Father Rose.

“I’m just filled with gratitude for all my assignments and all the people I’ve experienced,” he said, “and they’ve helped me grow in my faith; hopefully, I’ve helped them grow in their faith, and it’s been a good, good ride. …

“I’m looking forward to whatever God has in store for me — a new adventure. A new ‘inventure.’ … Yes. It’s time to go within.”