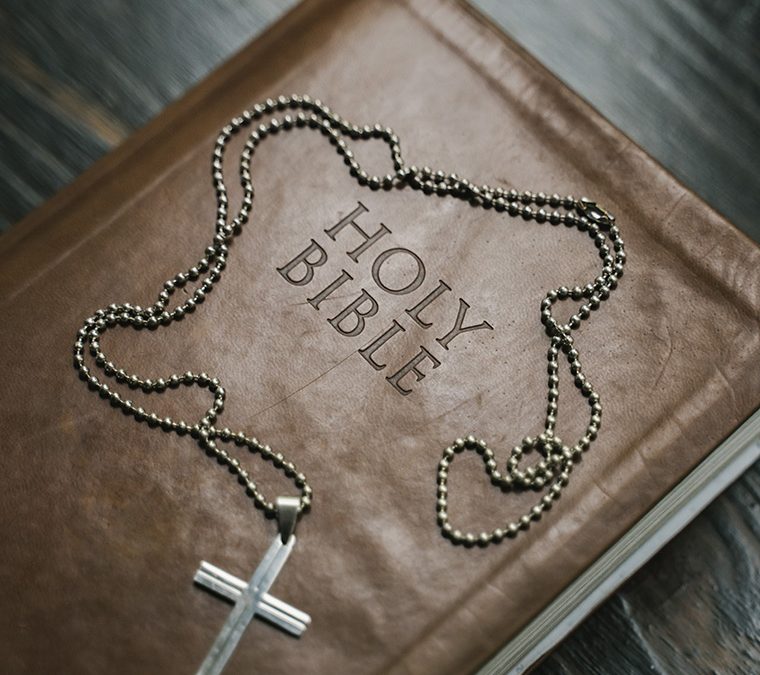 Get to know our newly ordained permanent deacons serving throughout the diocese:

DEACON ADEOLU ADEMOYO:  ‘Ade’ (pronounced ah-Day) to those who know him, first experienced the call to the vocation about 17 years ago. He credits his family, a variety of specific Scripture passages and a number of saints as the source of his inspiration. But “the example of Christ washing the feet of his disciples” is first and foremost on his list. In addition to helping at church, the Linked Parish of St. Thomas Aquinas and St. Patrick’s Church in Binghamton, Ade also is involved in chaplaincy ministry at both Wilson Hospital and jail ministry at Broome County Sheriff’s Corrections Division.

Ade was born in Nigeria and he and wife Omobolade have five children.Ade is a professor in the African Studies department of Cornell University.

DEACON MICHAEL CARROLL: Michael and his wife, Maria, have three children, and he is an active member of Our Lady of Good Counsel parish in Endicott. Michael traces his initial call to 2013, something he says started “as a whisper …, then it would echo in my heart with increasing frequency and volume.” When he shared his call with Maria, he was taken a little by surprise. “What I had not known, until that moment, was that Maria had been praying for me to hear that very call,” he shares.

Michael describes his formation experience as “an overture for a great love story that Christ is writing through me.” He takes inspiration from Christ and wife Maria. Retired from the working world, Michael serves as Maria’s full-time caregiver, which he credits as time spent that generates a great source of grace in his life. His ministries include adult catechesis and nursing home visitation.

DEACON MICHAEL CASEY: The Basilica of the Sacred Heart of Jesus in Syracuse has a tradition and history of vocational calls to the diaconate, and Michael is the most recent to come forward. While he is involved at the parish, he says, “I feel most excited to continue my ministry among the sick and the elderly who may have lost their way on this journey of life.” During his formation years, Michael has served as a chaplain at Van Duyn Nursing Home. He is now assisting the residents of Iroquois and Loretto nursing homes in their spiritual journeys.

Michael and wife RoxAnne have one son and one granddaughter and are ready to welcome a second grandchild this summer. He describes his formation experience as “a journey of self-discovery and a deepening of my faith. Formation is more to me than education, it’s an ongoing learning experience and lifelong process.”

DEACON LOUIS DELSOLE: Lou shares that “service to the poor and giving people a hand up” are central points of ordained diaconal ministry that most excite him. A retired physical education teacher and coach, Lou first felt the tug of the vocational call about 15 years ago. His formation experience impacted his faith journey. “My faith and prayer life have grown a great deal,” he shares. “Working with young children and the elderly brings me great joy. I also feel it will be my honor to baptize children.”

Lou will serve at his home parish, Sacred Heart Church in Cicero. Lou has one stepson and a granddaughter, Cecilia Grace, whom Lou loves spending time with.

DEACON DALE GREY: Dale is a retired colonel in the United States Air Force and a registered nurse. He is an instructor of nursing at SUNY Morrisville and a member of the pastoral team at his home parish, St. Bartholomew’s in Norwich.

Looking back on his formation and discernment journey he shares that “there was no ‘lightning strike’ moment” in his call to the diaconate. As a child in a non-Catholic home, he “wanted to attend Mass with my friends, but my parents would not let me.” He adds that “after joining the military, I started attending Mass on my own; it has felt like where I belong. It is like coming home.” He looks forward to serving in the Norwich parishes “to the best of my ability and showing people how the love of Christ can change their lives and how this same love can affect so many others around them.”

DEACON PAUL HEILAND: Paul credits two deacons – Thomas Harley and the late Dominic Rossi — as role models that inspired him to discern his own vocation to the diaconate. “Both were inspirations as family men who served God’s people as clergy,” Paul says. “The ‘loud and clear’ call came when I was first involved with a Pastoral Care class in Formation for Ministry in 2015.”

Paul and wife Regina have a daughter and two sons, both of whom will marry this summer. Paul looks forward “to meet with young families for baptisms and weddings” and believes his current involvement in hospital chaplain ministry will prepare him for work in the parishes as well, serving in the Western Broome Pastoral Care Area and his home parish of Our Lady of Good Counsel.

DEACON GREGORY HROSTOWSKI: Greg also served in the United States Air Force and retired as Transportation Supervisor after 34 years with the Johnson City Central School District. “Before I retired in 2011, I felt the desire to do more and get involved in the church,” he states. “I wanted to share myself with others and the church more, in some way.”

He credits Deacon Tom Picciano and his then pastor, Father Corey Van Kuren, among the influential people in his life who “nudged me to pursue and discern the diaconate in 2018,” he adds. A member of St. Vincent de Paul & Blessed Sacrament Church in Vestal, Greg is active in the Knights of Columbus as well as a number of parish ministries. He “most recently became a hospital chaplain” and looks forward to serving all in ordained ministry. 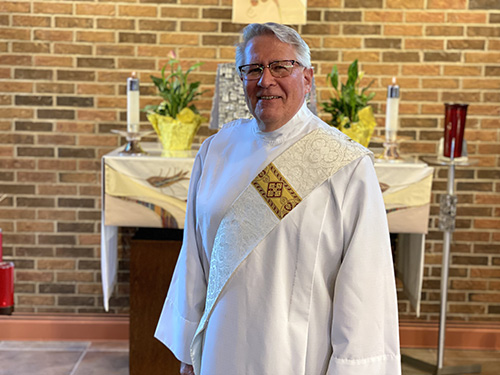 DEACON STANLEY OLKOWSKI: in 2017, Stan attended a deacon informational seminar and soon “realized that something transformative had occurred in my life. I felt the presence of the Holy Spirit and realized that the diaconate was the plan that God had for me.”

Stan takes his inspiration from the members of his parish family at Mary Mother of Our Savior, “who continue to support, encourage and pray for me.” Stan will continue to be involved in bereavement ministry at the parish, both the Utica and New Hartford campuses, and looks forward to an expanded role in nursing home ministry at St. Luke’s Home. 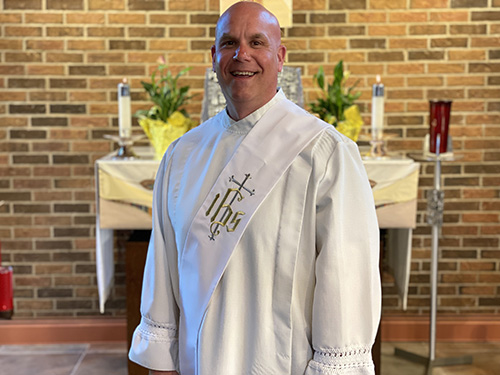 DEACON ROBERT STANHOPE: Bobby shares that his “calling to the diaconate was not necessarily a mystical experience or originally discovered by me, but through that of others. Others involved in my parish who believed I may have a calling.” He cites Deacons Chris Engle and Tony Paparella among those who recognized his vocational call.

Bobby says that his mom, Wendy, and wife, Jeannie, have been his faith inspirations. He is most excited about the “ministry of charity and service … the deacon’s distinctive ministry. However, it will also be my least visible ministry, as I attend to those on the margins of the Church and community.” A civil engineer, Bob and Jeannie have four children and three grandchildren. 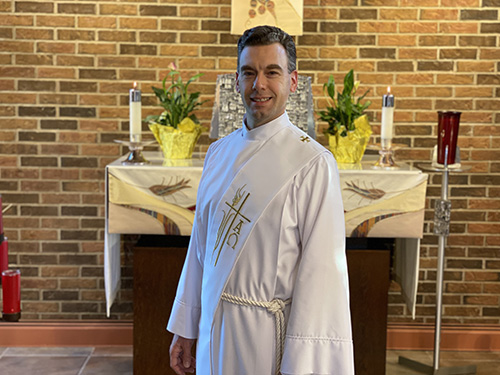 DEACON TIMOTHY STEDMAN: Like many who answer a vocational call, Tim says that “this journey of faith is one that I could have never predicted looking forward.” Before converting from the Lutheran faith, Tim “gave serious consideration to going to seminary.” In preparational studies, Tim “began to question and explore. Around the same time, I met my (future) wife Rebecca, a Catholic. Our mutual love of God and sharing of faith opened a door.”

Tim says that he has “very much felt called to a role of preaching and teaching. There are beautiful truths of our faith that need to be proclaimed,” but he also recognizes “the notion that discernment of God’s will is a lifetime endeavor.” Tim and Rebecca have four children; he will serve at St Mary’s and St. Anthony of Padua in Cortland.