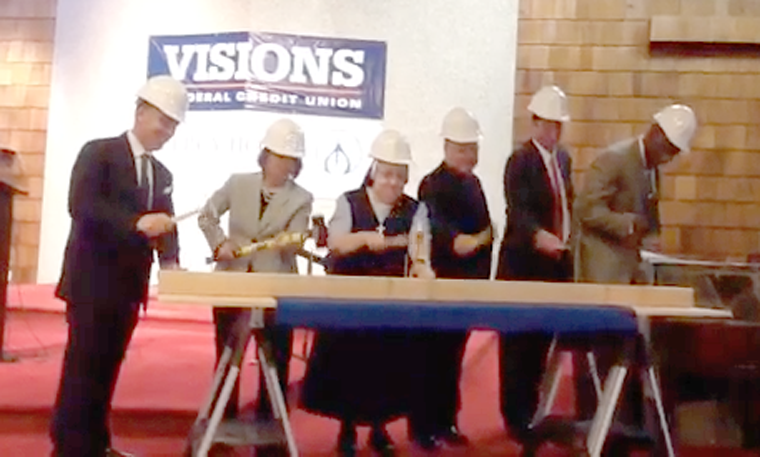 ENDICOTT — A ceremonial hammering of wood inside the former St. Casimir’s Church Sept. 9 signaled the start of construction for Mercy House of the Southern Tier, a home for those with terminal illnesses. Participants included those who have provided spiritual and financial assistance for the facility to be housed in the former church, which closed in 2013.

“The big move now is the renovation,” said Sister Joanna Monticello, MSC, Mercy House Executive Director, as she sat in a church pew the following day.

“I’m not a person that can visualize. I’m anxious to see how they are going to take this building and turn it into a ten-bed home,” she said. “It’s exciting to be really at the beginning of something, watching it transform.”

Construction is expected to begin within days as all paperwork regarding finances, insurance and permitting are completed. When it opens early next year, Mercy House will care for people with terminal illnesses.

There’s much work to be done, including decisions on some parts of the church and furnishings. Stained-glass windows at the top of the 46-year-old structure will remain in place. They’re secure and offer a source of light from the peak of the roof inside the building. Other windows will be moved.

“We’re retaining a number,” Sister Joanna said. “There’s going to be a chapel in back. We’re going to use our windows here to give light to the prayer room.”

The remaining stained glass will be offered to families of those who donated them to St. Casimir’s. “We attempted to try to sell them, but because they’re considered ‘modern’ there wasn’t a market,” she said.

Stained glass will be replaced with regular windows to allow residents to see outside their rooms. Recessed benches below the windows will provide seating for family and residents.

The slightly sloped floor will be leveled in what was the main portion of the church. Pews will be removed.

“First we tried to sell them,” said David De Angelo, Mercy House Director of Operations. “Then we tried to offer them to some churches that had some financial difficulties or fires or whatever. But out on the internet there are very, very many places you can go and get pews.”

Sister Joanna holds out some hope to find a place for the pews to go, adding: “If you hear of somebody…”

Ten bedrooms are planned for the area where people once worshipped. There will also be a dining room, kitchen, library, and common space with a fireplace. A sitting area at the former front entrance will face a garden. The attached two-story former rectory will include a chapel and office on the first floor. Three of four bedroom suites will remain upstairs for out-of-town families. The other will be used as an office.

Mercy House was the idea of the Human Development Committee at Holy Family Parish in Endwell. The pastor, Father Clarence Rumble, had some experience with a similar facility in Syracuse, Francis House.

After more than two years of planning, financing is now in place to begin renovation work. The targeted opening is late January or early February 2016.

“In general the support of the population of Broome and Tioga counties has been outstanding,” DeAngelo said. “The only comments have been positives.”

“Other denominations have reached out, actually asking me to come and speak,” Sister Joanna said. “At the end of this month I’m going to be speaking at Grace Lutheran. Even though they had their fire, they heard about this. They want to support the mission.”

“It may have been started, the idea, by Father Rumble, a Catholic priest — but it’s for everyone,” she noted.

People who have a diagnosis of terminal illness with three months or less to live will be welcomed at Mercy House. There will be 24-hour care as an alternative to nursing home, hospital or at-home care. Holistic care will also be provided to serve spiritual, emotional and social needs of residents and their families. Admissions are based on availability, appropriateness and need. Residents are admitted regardless of race, gender, age, religion, national origin or financial resources.

Mercy House will employ about 20-25 paid staff. As many as 150 trained volunteers will make up the bulk of the staffing and interaction with residents. As with the Lourdes Hospice program, which is working with Mercy House, many of the volunteers are expected to be families of residents.

Mercy House doesn’t receive insurance money or government funding. Residents or their families will be asked to contribute to the cost of their care.

Fundraising continues for Mercy House. The Second Annual Gala of Taste will be held Oct. 29 from
5 p.m. to 8 p.m. at Our Lady of Good Counsel Church in Endicott. Tickets are $75. For more information or to purchase tickets, call (607) 321-1857 or e-mail mhst@holyfamilyendwell.com For more information on Mercy House, visit the website at www.MercyHouseSouthernTier.com.

Deacon Tom Picciano is a longtime contributing writer to the Sun. A professional journalist by trade, he currently serves at St. Vincent de Paul Blessed Sacrament Church in Vestal.