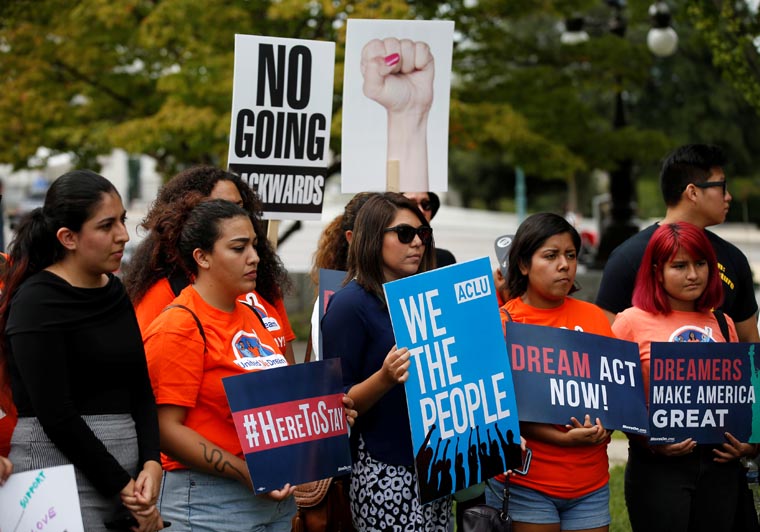 WASHINGTON (CNS) — The president of the Sisters of Mercy of the Americas Oct. 30 urged members of Congress to pass a bill that would help a group of young migrants who were brought to the U.S. as children without legal documentation, but one that wouldn’t include “measures that endanger” other migrants.

In a letter, Mercy Sister Pat McDermott asked for what’s called a “clean” DREAM Act. The DREAM Act stands for Development, Relief, and Education for Alien Minors Act and would, in theory, help youth and young adults brought illegally into the country as minors attain some form of immigration relief.

But what that relief would look like has not been defined by members of Congress who haven’t been able to pass such a legislative measure since it was first introduced in 2001. Because of the DREAM acronym, those who could qualify are popularly known as “Dreamers.”

Some 800,000 of those youth, until recently, could apply for a work permit and a reprieve from deportation under the Deferred Action for Childhood Arrivals program, known as DACA, that had been put into place in 2012 by then-President Barack Obama. In September, however, President Donald Trump rescinded the DACA program and asked Congress to find a legislative fix. Some have suggested a version of the DREAM Act as that fix.

The youth who would be affected have said that while they favor a legislative solution by Congress, they want a “clean” bill, which Sister McDermott says is one that would be “unencumbered with costly, punitive and unnecessary provisions.”

Some think certain Congress members would pass the bill in exchange for more money to fund a border wall with Mexico or more federal money for officers at the border.

Recounting that the Sisters of Mercy “came to this country as immigrants in the 1840s,” Sister McDermott urged politicians to consider “the reality of hundreds of thousands of young people who have little or no connection to the country of their birth. Many have no memory of having lived there, do not speak the language and have no support system if they returned.”

Mercy sisters, she said, “have served with immigrant communities, first the Irish and now in recent times with immigrants from all over the world. Many are fleeing poverty, war and oppression in their home countries — conditions that are exacerbated if not caused by U.S. military interventions and economic policies that put corporate profits ahead of the basic needs of people and the environment.”

She expressed disappointment with the decision to end the DACA program, and said the religious congregation of 2,900 women religious in the Americas, “were shocked and saddened” by the developments. Mercy sisters were a constant presence at protests outside the White House before and after the end of DACA was announced. Some of them are administrators at colleges and universities that enroll some of the youth whose futures are in question.

“This program is rooted in the realization that young people, regardless of the circumstances of their birth, represent our hopes and dreams for the future,” said Sister McDermott.

“We have a moral obligation as a society to nurture those dreams, to uphold their basic human rights and make sure that all of our young people have the opportunity to develop their God-given gifts and talents in service to the common good,” she said.

Sister McDermott further rebuked the administration and said its “callous attack” on the youth adds “to the intense suffering that already afflicts our immigrant communities today.”

“Children, including the U.S. citizen children of undocumented parents, live in fear that they will return home from school to find that a parent has been picked up by (Immigration and Customs Enforcement),” she continued. “No child should have to carry such a burden, yet we witness this daily in our communities.”

She said any legislation to help the youth, but which also would include “anti-immigrant provisions,” such as the border wall, increasing numbers of border patrol agents and expansion of detention facilities, shows “a mean-spiritedness, a total disregard for our moral obligation and duty to uphold justice that are unworthy of us as a nation.”

Instead, she said, “it is time to take the inscription on the Statue of Liberty seriously and act in the best interests of the Dreamers who are ready, willing and able to make our country and theirs a better place.”

The letter was published as part of Praying With Dreamers Week, which began Oct. 29, a week some groups were using to call others to love their neighbor and welcome the stranger.