‘Merton speaks to us today’: The ‘perennial wisdom’ of Trappist monk and spiritual writer Thomas Merton 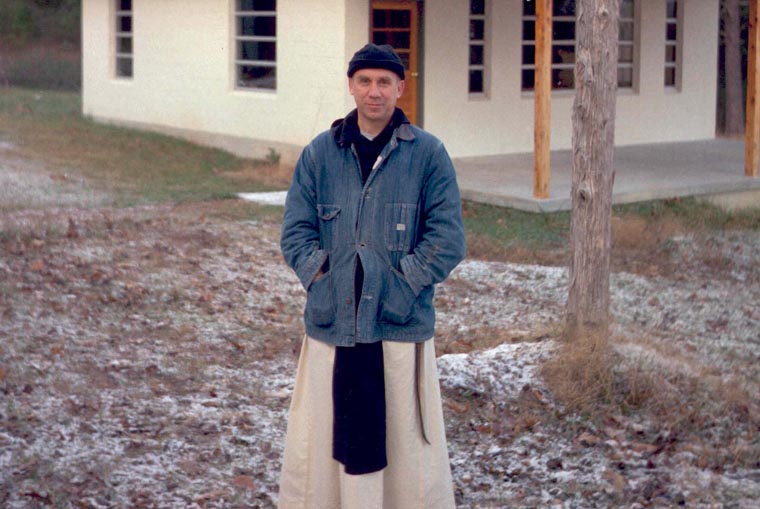 Dr. Christine M. Bochen, a Nazareth College religion professor, was researching Thomas Merton at Syracuse University’s Bird Library in the late 1990s when she found a treasure. On April 14, 1966, the famous Trappist monk, writer and advocate for peace and justice had written this in one of his spiral notebooks:

“The work of writing can be, for me, or very close to, the simple job of being: by creative reflection and awareness to help life itself live in me. … For to write is to love: it is to inquire and to praise, or to confess, or to appeal.”

The quote was published in Learning to Love: Exploring Solitude and Freedom, (HarperSanFrancisco, 1997), a collection of Merton’s journal entries Bochen edited. The passage continues:

“The bad writing I have done has all been authoritarian, the declaration of musts, and the announcement of punishments. Bad because it implies a lack of love, good insofar as there may yet have been some love in it. The best stuff has been more straight confession and witness.”

“This is really reflective writing,” Bochen said. “Some of his notebooks [are] copying quotations and working out his enthusiasms. In this, he’s being thoughtful. It really sheds light on the journals, which many have found an exciting entry into reading Merton.”

In June, Bochen was among more than 500 people from about 20 countries who attended the International Thomas Merton Society at Bellarmine University in Louisville, Kentucky. The conference was one of numerous worldwide events, exhibits and publications marking the 100th anniversary of Merton’s birth. Many of those celebrations highlighted the continuing relevance of Merton’s thinking and writing on spirituality, interreligious dialogue, peace and racial equality.

“Merton speaks to us today,” said Bochen, a founding member and past president of the Merton Society. “In class, we’ll be reading his work and someone will say, ‘It sounds like this could be written yesterday.’ He speaks to young people who are hungry for spiritual meaning and understanding about the violence in our world or in ourselves. He’s really expressing a perennial wisdom.”

Merton is perhaps best known for The Seven Storey Mountain, his 1948 memoir about his conversion to Roman Catholicism at age 23, his decision to enter the monastery and his personal search for God. The title of his spiritual memoir refers to the mountain of Purgatory in Dante’s The Divine Comedy. The book is often praised as the modern-day Confessions of St. Augustine, the 4th century autobiography of Augustine’s conversion to Christianity.

Merton taught English at St. Bonaventure, where he contemplated joining the Franciscans. In 1941, at age 33, he entered the Cistercian Abbey of Gethsemani in Kentucky and was ordained as Father M. Louis in 1949. He died Dec. 10, 1968, of accidental electrocution, in Bangkok, where he had spoken at an interfaith conference.

The largest Merton archive is at Bellarmine University, near Abbey of Gethsemani. Columbia (where he earned bachelor’s and master’s degrees) and St. Bonaventure (where he taught) Universities also house large Merton collections. Merton had no direct connection to Syracuse, but left three boxes to Syracuse University at the request of the library in the 1960s. The Thomas Merton Papers — mostly copies of letters and articles from the last five years of his life, along with a pile of his spiral journals with tiny, neat letters — are available for review (advance permission required) at SU’s Special Collections Research Center.

One gray-green box holds an undated letter to Martin Marty, the highly regarded expert on religious history. It refers to the July 1967 Newark riots that left 26 dead and hundreds injured. In a passage that could apply to the protests over racial equality that began in Ferguson, Missouri, last August, Merton despairs at the country’s unrest.

“We are in a great crisis of meaning,” he wrote to Marty. “These (riots) were inevitable, and more like them are likely.”

The boxes include writings in which Merton opposed the Vietnam War; raised questions about the role of the church and its leaders in the world; and commented on Vatican II meetings. One document highlights Merton’s relationship with the anti-war activist priests Daniel and Philip Berrigan, who met with him at the Kentucky monastery. In a 1968 letter, Merton calls the Berrigans’ civil disobedience “intentionally provocative.”

Not everyone liked Merton’s writing on social and political issues. In April 1962, his abbot forbade him to publish anything on war, Bochen said. Although he technically obeyed his superior, he managed to spread his ideas by copying his letters and sending them to multiple people. Those letters and other confidential materials are now open to study.

“Now we’ve got the whole picture,” Bochen said. “We can go back and look at sources that were not available before, including letters that are uncensored and very candid.”

Living in a remote monastery provided Merton perspective on the turbulent, ever-changing world, she said. “He lived a life of silence and solitude,” she said. “Because of his experience of prayer, he could see reality in clearer terms than many of the rest of us.”

“This was his last stop in the world,” said Paul J. Staeth, director of St. Bonaventure’s Friedsam Memorial Library and special collections librarian. “It was absolutely central to his life. When he was here, he was in the searching mode.”

Merton reveled in his relationships with the college’s Franciscans and in the beauty of the Allegheny River and the hills, Staeth said. He was praying in the campus shrine to St. Therese when “he heard the bells on campus and it reminded him of God,” Spaeth said. “It was there that he decided to be a Trappist. He didn’t even finish the semester.”

The campus itself is an archive to Merton, Spaeth said, and the buildings where he lived and worked still stand. A Merton walking tour includes Devereux Hall, where Merton lived; De la Roche Hall, where he taught; the Shrine of St. Therese of Lisieux and a grotto honoring Our Lady of Lourdes; and Friedsam Library. Visitors can also view “Merton’s Heart,” a heart-shaped clearing in the woods where Merton is said to have walked often.

Although Merton wrote in The Seven Storey Mountain about his time at St. Bonaventure, few students know about his work and his legacy, Spaeth said.

“They find out about him eventually,” he said. “When they come to learn about him, they want to know more.”

Merton, in his own words
“I was suddenly overwhelmed with the realization that I loved all those people, that they were mine and I theirs, that we could not be alien to one another even though we were total strangers. … There is no way of telling people that they are all walking around shining like the sun.”

“We are living in a world that is absolutely transparent and God is shining through it all the time.”

“The Spiritual Life is first of all a life. It is not merely something to be known and studied, it is to be lived.”

“If you want to identify me, ask me not where I live, or what I like to eat, or how I comb my hair, but ask me what I am living for, in detail, ask me what I think is keeping me from living fully for the thing I want to live for.”

“There is only one vocation. Whether you teach or live in the cloister or nurse the sick, whether you are in religion or out of it, married or single, no matter who you are or what you are, you are called to the summit of perfection: you are called to a deep interior life perhaps even to mystical prayer, and to pass the fruits of your contemplation on to others. And if you cannot do so by word, then by example.”

“I am fully real if my own heart says yes to everyone. I will be a better Catholic, not if I refute every shade of Protestantism, but if I can affirm the truth in it and still go further. So, too, with the Muslims, the Hindus, the Buddhists, etc.”

“Contemplation is the highest expression of our intellectual and spiritual life. It is that life itself, fully awake, fully active, fully aware that it is alive. It is spiritual wonder. It is spontaneous awe at the sacredness of life, of being.”

“A man who is not at peace with himself necessarily projects his interior fighting into the society of those he lives with, and spreads a contagion of conflict all around him.”

“It is good to wait in silence for the salvation of God.”