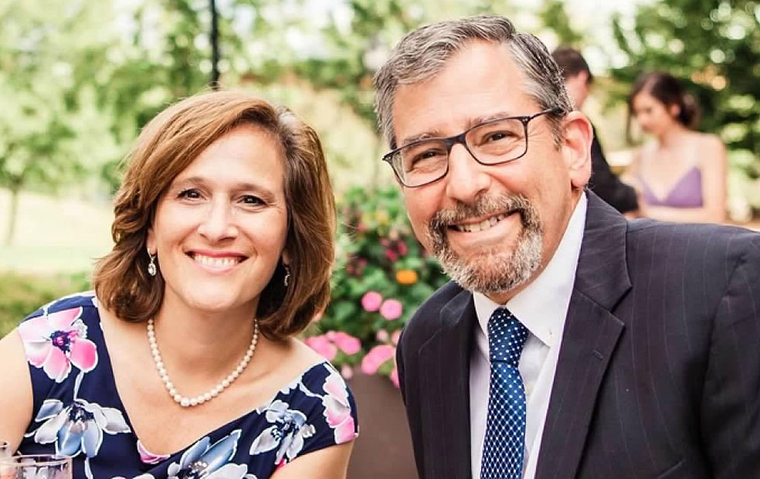 Michael F. Melara ’81 and Lisa Mannella Melara ’85 have been selected as the honorees for the 2022 Founders’ Day Gala at Le Moyne College. At the event, which will be held on campus on Friday, Oct. 21, the Melaras will be presented with the Simon Le Moyne Award, the highest honor given by Le Moyne. It will be the first in-person Founders’ Day since 2019. (For information on tickets or sponsorship opportunities, please contact Kim McAuliff at mcaulikb@lemoyne.edu or 315-445-4553.)

“I’m so proud to recognize both Mike and Lisa with this prestigious award,” said Le Moyne President Linda LeMura. “Both professionally and personally, they have demonstrated a long-standing commitment to giving back in so many ways for the benefit of the community.”

“We are so honored to have been selected to receive the Simon Le Moyne Award,” said the Melaras. “Le Moyne has been such an important part of our lives for so long and we are truly blessed that the college has chosen to honor us in this way.”

Mike has served as chief executive officer of Catholic Charities of the Diocese of Syracuse since 2018. Reporting to Syracuse Bishop Douglas J. Lucia and working with the area directors of Catholic Charities in Broome, Chenango, Chenango, Cortland, Onondaga, Oneida/Madison and Oswego counties, he oversees an organization that delivers services to nearly 150,000 individuals each year and has a budget of $66 million and more than 1,400 employees. Within the Diocese, Mike is responsible for the Office of Social Action Ministry, the Catholic Campaign for Human Development, and Catholic Relief Services. He has also served as executive director of Catholic Charities of Onondaga County since 2008.

He began his involvement with Catholic Charities while a junior at Le Moyne, volunteering at a Catholic Charities Neighborhood Center through Projects in the Community. As a freshman, Mike volunteered at Unity Kitchen, a homeless shelter for men that was eventually taken over by Catholic Charities and continues to operate today under his leadership. He has extensive experience in social service leadership roles, previously serving as executive director of Huntington Family Centers, director of Child & Family Services at Liberty Resources, and as an education specialist at SUNY Albany. Mike previously worked at Catholic Charities of Onondaga County as a case manager after graduation from Le Moyne.

Mike is on the board of directors of Toomey Residential and Community Services, Christopher Community, and Lourdes Camp. He also served as a member of the board of regents at Le Moyne from 2010 to 2016. He attended Immaculate Heart Central in Watertown before graduating from Le Moyne in 1981 with a bachelor’s degree in psychology. He received a master’s degree from Chapman University in 1989. Mike is also a 2004 graduate of Leadership Greater Syracuse and was named a Leadership Fellow of the Western & Central New York Community Health Foundation in 2009. In 2021, he established an executive coaching and training business, MFM Leads, where he provides individual consultation to both emerging and seasoned executive-level staff. He has a published case in the Global Jesuit Case Series and is a sought-after trainer and public speaker.

Lisa currently serves as a career and workforce adviser in the college’s ERIE21 program, an initiative addressing the region’s twin problems of persistently high poverty and the inability of employers to attract and retain skilled workers in the technology and innovation industry. She performs this work out of her contracting business, Lisa Melara Career Connections.

Lisa has leveraged a career in technology at the IBM Corporation in the service of Le Moyne and particularly ERIE21. Prior to her retirement in 2021, she was a resource and technical operations manager in IBM’s Data and Artificial Intelligence division. Lisa began her more than 35-year IBM career shortly after her Le Moyne graduation. She trained as a large-system engineer in IBM’s marketing and technical education program in Dallas, Texas. She spent over nine years in technical marketing supporting the region’s state and local government accounts. When IBM was building its consulting business, she held positions in project management and systems integration implementation. She later shifted her focus to IBM’s Technical Operations. Lisa was instrumental in developing project financial management methods for the largest and most complex projects in the Enterprise Applications practice of Global Business Services.

Lisa served as a volunteer and board member of the Samaritan Center and remains a member of the volunteer committee. Working with Madden School of Business McDevitt Distinguished Chair and I/S Program Director Dr. Martha Grabowski, Lisa was instrumental in connecting Le Moyne with the Samaritan Center for the CURAR Applied Research Grant. Now in its seventh year, Le Moyne students continue to benefit from this applied service learning and internships.

A lifelong reader and patron of libraries, Lisa is currently a trustee of the Northern Onondaga County Public Library and is a charter member of the Le Moyne Alumni Book Club, which is beginning its 17th year. Lisa serves as a member of the Madden School of Business Advisory Board and the Information Systems Advisory Board, has been a longtime volunteer with the Office of Career Advising and Development, and previously served on the Le Moyne College Founders’ Day Committee. She attended Notre Dame High School in Utica, before graduating from Le Moyne in 1985 with a bachelor’s degree in mathematics/management. She is currently a master’s student in liberal studies at the University of Brockport.

Mike and Lisa are parishioners at the Cathedral of the Immaculate Conception in Syracuse. They are the proud parents of two children, Juliana Rose and Dominick Michael, both graduates of the University of Scranton. Juliana received her master’s degree from the Maxwell School of Citizenship and Public Affairs at Syracuse University.

Held annually since 1968, Founders’ Day honors an individual, couple or group who have made significant humanitarian contributions to society, serve as prominent leaders in the community, demonstrate a deep responsibility and commitment to improving the quality of life for others, and exemplify the ideals and goals of Le Moyne College and Jesuit education. Over the past 10 years, Founders’ Day has generated more than $3.5 million for student scholarships.