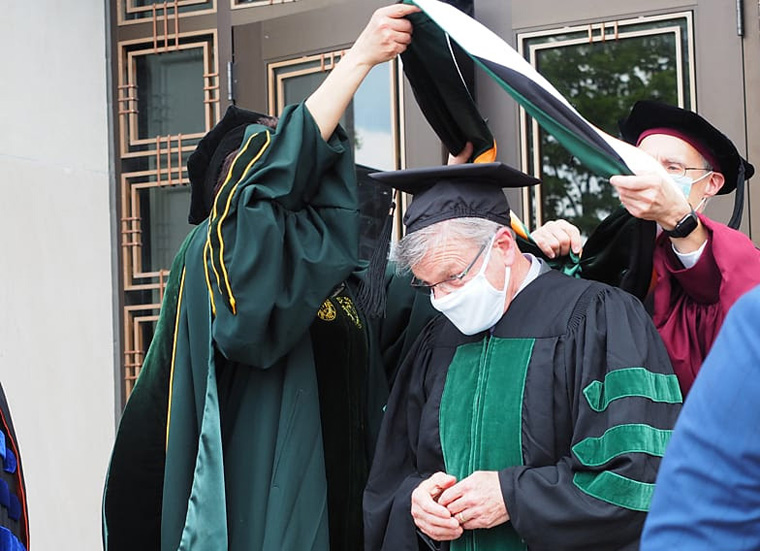 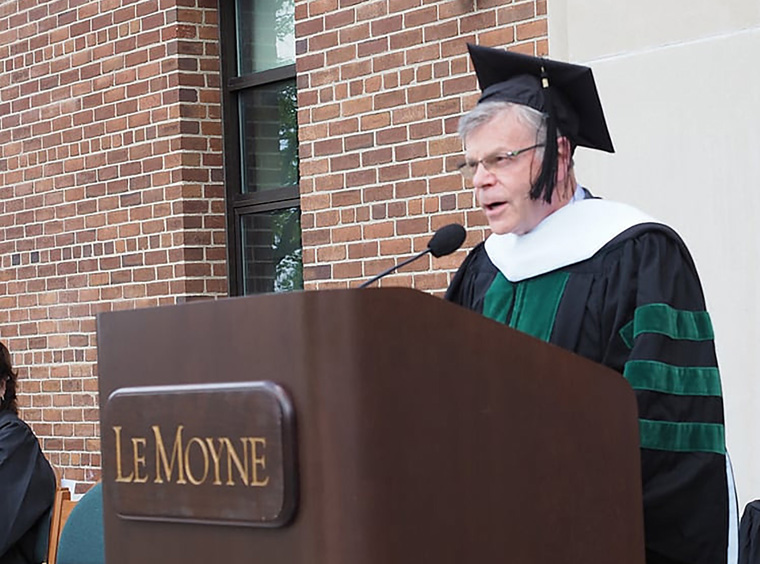 Deacon Dr. Robert Fangio says Le Moyne College “gave me the great gift of Ignatian spirituality in my life. And for me that was a wonderful gift.” (Photos courtesy Le Moyne College)

Pain-free, no fee. For serving charity, two dentists now have what may be their most important academic honor.

Le Moyne College grads Dr. David Dasher (’69) and Deacon Dr. Robert Fangio (’78) had retired from dentistry. But moved by values instilled back in school, they launched a gratis dental office in Syracuse — earning them each a Doctor of Humane Letters diploma on May 15 at Le Moyne’s honorary-degree ceremony.

“I think it’s a recognition of our commitment to the … poor and underserved people of Syracuse,” Dr. Dasher said. “And it’s also a reflection, I think, of Le Moyne’s commitment to that same group of people — committed to the underserved and the underprivileged in the community and whatever community the Le Moyne graduates” live in.

To Dr. Fangio as well, the honorary degrees “recognize people who have accepted the mission of Le Moyne in their own lives”; that is, “community service and leadership, for the benefit of those in society. I think that’s an incredible honor to have, and it is a degree that means so much to me, if not, maybe, more than” any other degree that he has received.

Dr. Dasher noted Le Moyne’s saying, “Greatness meets Goodness,” and added: “I think the goodness part of it certainly is part of our mission here at Amaus.”

Amaus Dental Services, an outreach of the Cathedral of the Immaculate Conception in Syracuse, is where toothaches meet their demise. The office opened in 2014 thanks to the vision of people such as Msgr. Neal Quartier, rector of the Cathedral, and Dr. Lynn-Beth Satterly. The dental office expanded into Suite 202 in the Bishop Curley Building in 2017. Offered are examinations, X-rays, cleanings, fillings, and extractions; not offered are root canals, crowns, or replacement of missing teeth.

The all-volunteer staff includes six dentists, three hygienists, about 10 assistants, some of whom are predental students at Le Moyne and Syracuse University, and six volunteer administrators.

The décor of Suite 202 has been described as “all organic, subtle tones,” including nice carpeting. Dr. Dasher, one of the founders and the executive director, said the office is “like a private office where people are given appointments and are respected.”

Patients served are from Central New York and beyond. They are uninsured or underinsured, including people who are homeless, refugees, the elderly, and people on fixed incomes.

Both Drs. Dasher and Fangio deserve their honorary doctorates, said Amaus Administrator Judi Brown: “It’s wonderful that they’ve been recognized for everything that they do, and not just their achievements but the appreciation from all the patients that come through our doors. … There’s so much you get in return from giving the time. It’s just so rewarding, because people are obviously in pain and feel helpless, and they need people’s help.”

“It’s an extremely well-deserved award — it’s their baby, they created this,” said Dr. R.J. Dietz, a 1975 graduate of Bishop Ludden Jr./Sr. High School in Syracuse and an Amaus volunteer dentist who is retired from his private practice in Camillus.

Return of the commuter 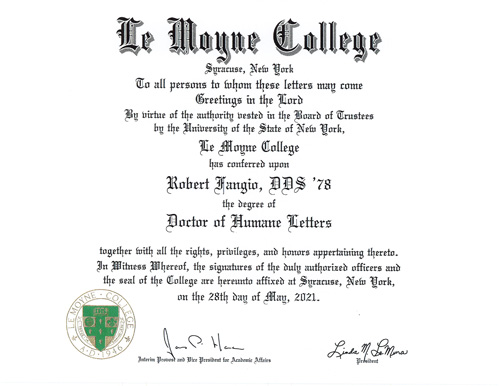 Dr. Fangio, Amaus’ director of operations, graduated from Ludden in 1974 before earning his degrees from Le Moyne and the University at Buffalo School of Dental Medicine. He was a commuter student at Le Moyne and so was his wife, Mary Lannon Fangio (’77), although they didn’t meet until later.

Deacon Dr. Fangio retired from his private practice in Liverpool at the end of 2014, the same year he was ordained, and he joined Amaus in 2015. Last year, he was named the director of deacon personnel for the Diocese of Syracuse. He told the Le Moyne audience:

“Perhaps one of the greatest blessings I received from Le Moyne College was my introduction to the spirituality of St. Ignatius of Loyola. And that spirituality has been a solid moral compass for me for 43 years after my graduation. St. Ignatius in his spiritual exercises speaks about gratitude and how when I’m filled with gratitude for God’s love and all the blessings that come with that love, my natural response is simply to love in return.

“And Jesus in his great commandment spells out quite clearly how that’s done, how I love in return, when he says I should love my God with all my heart, with all my soul, and with all my mind, and then to love my neighbor as myself.

“So if I am worthy of this incredible honor from my alma mater, it is because I’ve tried to live out the first part of that commandment: to love God by embracing my Catholic faith instilled in me by my wonderful parents and nurtured by my Le Moyne College education and formation. And I am deeply grateful to my family for their beautiful example of love, and to my fellow recipient and alumnus Dr. Dasher, for the guidance I’ve needed to live out the second part of that commandment, which is to love my neighbor” through “community service we have been privileged to offer together.”

The work at Amaus includes “the most delicate, challenging procedures,” noted Mary Springston, clinical associate professor and director of clinical advancement in Le Moyne’s physician-assistant program, who introduced Dr. Dasher. The tools of his trade, she said, include “compassion, empathy, and kindness. On an average day, David may help one person experiencing chronic pain and another in need of long overdue checkups, and another who may feel self-conscious about … their teeth.”

Dr. Dasher had eight years of Jesuit education — four years at Canisius High School in Buffalo and four years at Le Moyne. “I met my wife [the former Patricia Tubridy (’69)] there,” he said. “My whole life has a Le Moyne slant to it.”

His former service includes dental director for both the Syracuse Community Health Center and a health center in Wichita Falls, Texas. He also served in the Air Force for 25 years and was a special consultant in war readiness and enlisted training for the Air Force Deputy Surgeon General for Dental Services.

When he arrived back in Syracuse in 2009, he told the assemblage, he “could not help but be impressed by how Le Moyne graduates were so deeply ingrained in the fiber of Central New York. Whether it be in business, medicine, education, nonprofit organizations, Le Moyne graduates were always in leadership positions.” He added that he looks at his honorary doctorate as an award “for all of them, not just for me.” 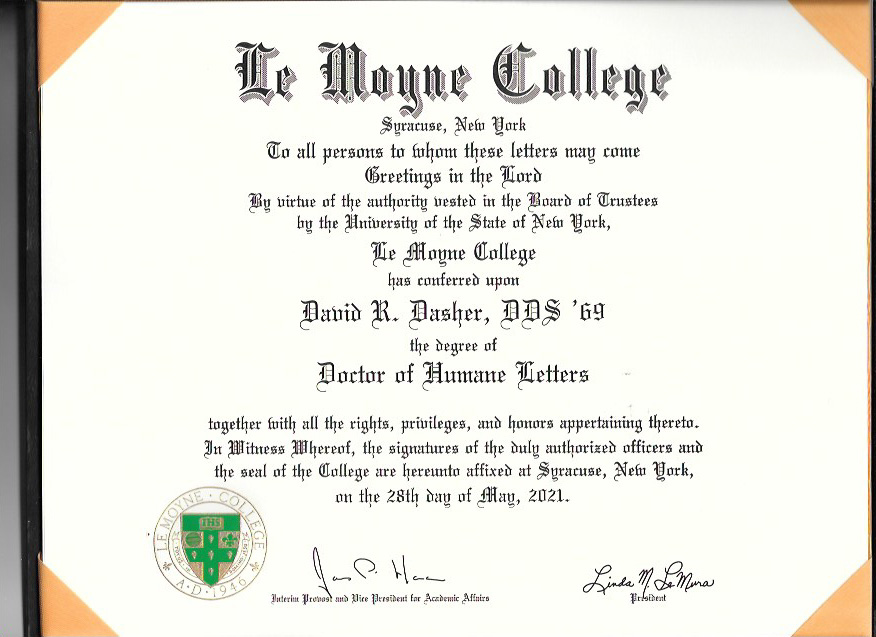 Although dentistry is a demanding field, Dr. Dasher continues as a volunteer “because of the reward you get from helping people. Going to the dentist may not be everyone’s favorite thing to do, so when you can help somebody through that psychological obstacle and take care of their oral problems, you feel good about it, it’s rewarding.”

“Le Moyne is a true gem in this city, it really is,” Dr. Fangio said. “It’s an amazing gift that we have in this city that sometimes I think we take for granted — the quality of that college here and what it’s done for us …

“Without Le Moyne, my opportunities, my ability to get into dental school period, I think would have been more limited.” He cited Le Moyne predental advisers who prepared the students for dental-school-entrance exams and guided them through the application process — “it made a huge difference.”

And Dr. Fangio cited Acts 20:35: “Keep in mind the words of the Lord Jesus who himself said, ‘It is more blessed to give than to receive.’”