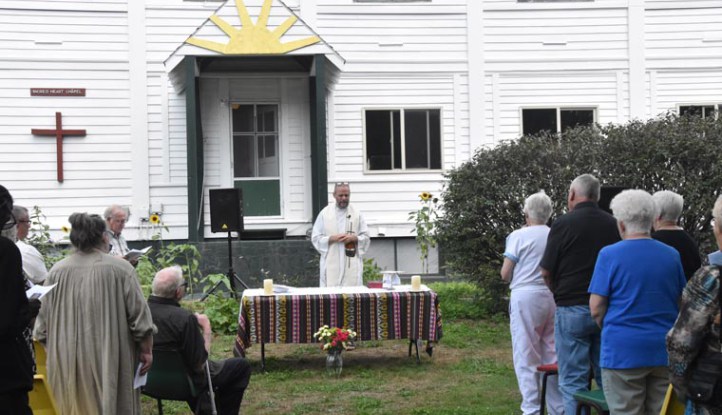 Father Thomas McNamara, O.F.M., Cap., celebrates Mass on Aug. 19 at Unity Acres in Orwell. He told the congregation to give thanks to God for UA’s 50 years. -sun photo | Tom Maguire

Orwell — The “old neighbor,” grateful and reverent, was back in the countryside.

Father Thomas McNamara, O.F.M., Cap., celebrated the Aug. 19 outdoor Mass that launched the months-long 50-year-anniversary celebration of Unity Acres (UA), where dozens of men at any given time find safety from alcohol- or substance-abuse struggles.

Father McNamara, who grew up in Oriskany Falls, pastors a Manhattan church; he formerly lived at St. Francis Farm, a one-mile walk through the woods from UA. “I’m all about gardens, plants,” he assured the congregation, comfortable next to the Acres’ sunflowers and giant Norway spruce and attentive to the warbling of the birds.

About 80 people attended the Mass, which honored some of the pivotal figures at UA over the decades. Covering the outdoor altar was a colorful tablecloth from Guatemala; it had been used by the late Father Ted Sizing, who had lived with Father McNamara at St. Francis Farm.

The vestments that Father McNamara wore had been the property of other dear friends — the late Father Moritz Fuchs and the late Father Robert S. Jones, the beloved UA chaplain.

Father Jones — “In his retirement he set up [the former] Elizabeth House [for people with disabilities]. … Constantly visiting people. … The face of compassion and mercy.”

Father Sizing — “Unbridled joy. … He received eight to 10 personally written letters every day. … He would write every evening. … Kept correspondence around the world.”

The Mass and the picnic that followed also honored UA founder Father Ray McVey and his brilliant organizational assistant, Kate Stanton. They died within six months of each other, and they are buried in UA’s Saint Martin de Porres Cemetery. Remembered with reverence as well was the late organist for UA Masses, Mary Agnes Roy.

Supplying the music this time was the Central Square husband and wife team of Jim and Deirdre McCarthy, who sang two of Father Jones’ favorite songs: “Garden Song,” by David Mallett, and “Smile,” by Carey Landry. Deirdre said UA has shown love for downtrodden men who have nowhere else to go. Jim said, “Father Jones was certainly a real inspiration here. … His whole heart and soul was here and the men knew it.”

Masses are held in the on-site Sacred Heart Chapel, and Alcoholic Anonymous meetings are conducted in the dining hall on Thursday and Friday nights. The home receives no direct government funding. A nonprofit, it receives donations, and board member Dave Pasinski said residents contribute from their own pensions or Social Security or whatever other sources they have if possible.

Pasinski said in an email that UA “could very well have ceased to exist without the help of people like Mike Crough, a friend and attorney who still helps, and many others who saw that it needed to have the character that is somewhat institutionalized but yet very much … in the Gospel and the general philosophy of the Catholic Worker.”

Pasinski also noted the contributions of the current UA director, Steve Dickhout, staffer Peg McCarthy, and a resident named Bear, all of whom offer vast knowledge and a strong commitment.

At the outdoor Mass, the petitions read by McCarthy called for the government to show concern for the poor and needy, and for those in a position of authority to be generous and empathetic.

In his homily, Father McNamara called for the congregation to get unstuck in “the best way we know how: Call a friend, visit someone, help at Unity Acres, talk with a spiritual director. … Find someone with whom you can speak to help you.”

After the Mass, people kept coming up to Father McNamara, the pastor of Our Lady of Sorrows on the Lower East Side of Manhattan. “Everyone can do something to help the poor,” he said, chatting right beneath the spot where a hummingbird came and hovered. “Don’t wait for Mother Church or Mother State to take care of us. Let us do something ourselves to help.”

Asked about his impressions of the place after his approximately 15 years there, a resident named Dave, who will be 60 in October, said, “Saved my life.”

Born in Syracuse, he lived in Liverpool, the town of Clay, Baldwinsville, and Central Square; he likes the country. “I was alcoholic and drinkin’ hard,” he said. “I was drinkin’ all the time and I come here, and I was all run down; I had infections…. malnourished and everything, all messed up; I had head problems and stuff, and I got in a dungeon, and I had seizures, all kinds of problems and stuff.” He said UA straightened him out and helped him get his health back.

Dave goes through the buildings on night watch, checking for fires and making sure the residents are safe. The residents have individual rooms in an east wing and a west wing, and each wing has its own bathroom, another resident said.

UA, Dave said, “keeps you off the streets and out of trouble. … kind of a protection, keeps you away from a lot of malarkey going on out in the streets and stuff. … It’s a safety haven. … If I never came here I wouldn’t be alive now. I would have been dead, the drinking would have killed me.”

A 57-year-old man named Roger, a   resident going on 15 years, is originally from Mexico, just down the road in Oswego County. A former volunteer firefighter and emergency medical technician, he takes care of the fire extinguishers, smoke alarms, and fire hoses, and he also does night watch.

“I just ran out of places to go,” he said inside the mess hall during the picnic, “and was just running out of total options.”

He added: “Without a place like this, without this place being here, a lot of these guys, who knows where they would be? A lot of them would probably … either would be living under some bridge in Syracuse or in prison somewhere or some hospital, or even some cemetery.” UA also gives them an opportunity for medical help, he said. “Without a place like this, they don’t have that.”

A resident named Robert, 63, serves as the UA photographer among his other duties. “I’m lucky to be here. I’ve got gratitude,” he said. Told that another resident said he would be dead if it weren’t for UA, Robert said, “I can say that for myself.”

He started his alcohol recovery in 2002 and was sober for eight years. Then he “got lazy, relapsed,” and went back into rehab. He worked his way out of that and held down a job in Syracuse but was laid off and couldn’t find work. Well-spoken and in possession of a topnotch resume, he said he will probably be back in the workforce in three to six months. “I’m still going to keep in touch with the people I’ve met here, including the staff,” he said.

Sometimes at night, Robert walks up to the cemetery, where he gets “kind of reflective.” Many former UA residents are buried there. As the picnic wound down, Robert, Director Dickhout, and Father McNamara got quite reflective as they visited the cemetery. “Beautiful piece of property,” Father McNamara said.

Father McNamara, who studied agriculture, spotted three of nature’s wonders that were virtually invisible: a tiny minnow in a brook, a one-inch toad, and a frog that had been hiding in the dead leaves at the bottom of a green plant. Then he identified the various trees and plants on the property: river birch, white pine, red pine (tall, straight, and happy-looking, he said), Scotch pine, yellow birch, hemlock, cardinal flower, clematis, nightshade, Joe-Pye weeds.

“Quite a spot here. So peaceful,” Father McNamara said. The group looked at the gravestone of a former resident named John. “He was a fun guy,” Dickhout said. “I think about him a lot.”

Another gravestone was for a former resident named Steven. “Big animal-lover,” Dickhout recalled. And then the gravestones of two former Marines: “Just about best friends.”

Regarding UA’s future, board member Pasinski wrote that this is a transitional time for donors, with so many from that generation dying off. “We, the board, are committed to keeping it alive and going along with those who are able to do so and know that every day … it builds on God’s grace,” he wrote.

Asked about plans for UA, Dickhout said that toward the end of his life, Father McVey faced a similar question that somebody asked.

“For him,” Dickhout said, “the plan was fidelity.”