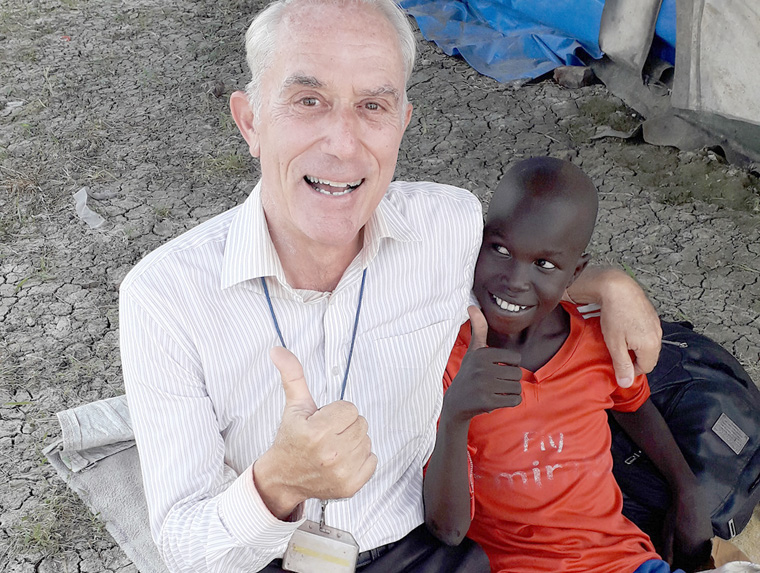 Prevented by pandemic precautions from leading liturgies in person, Maryknoll Missionary Father Michael Bassano, a Binghamton native, keeps a “connection with the people in prayer and song” in South Sudan.

His 9 a.m. Sunday Nile Radio broadcasts go out to people who have been displaced by the country’s civil war, “especially for our elderly and little children as well as those in the hospital.” They live in the UN Protection of Civilians (POC) camp outside the town of Malakal in Upper Nile State. Up to about 3,000 of the 30,000 people in the camp are members of his parish. The weekly broadcast, he wrote, “unites us as the one family of God.”

On Sept. 20, he wrote, the government task force on COVID-19 gave permission for churches and mosques throughout the country to reopen.

But Father Bassano, who is 71, said the chief medical doctor in the COVID-19 response for Upper Nile State “seriously recommended that I stay away from large church gatherings until we see a gradual decrease in the number of cases both in our POC camp as well as Malakal town and outlying areas.” The doctor, he said, told him how important it is to “protect myself and others from being infected at this time.”

Father Bassano lives near the POC camp in a shipping-container room in a fenced-in compound. He watches the sun rise, reads Scripture, walks alone, and writes poetry.

“Our church in the camp is now open with the local priests from Malakal town coming to celebrate with the people,” he wrote.

The Diocese of Malakal, he said, is the largest geographically; it comprises one-third of the country in land. Bishop Stephen Nyodho Ador Majwok had invited people in the camp to attend the celebration of the Feast of Daniel Comboni on Oct. 10 but Father Bassano was precluded from attending.

He also must miss the diocesanwide pastoral assembly Nov. 12-18 and the ordination of Deacon William Deng to the priesthood Nov. 22 in the town of Kodok on the west bank of the Nile River, a three-hour boat ride away.

“Although there is a feeling of sadness within me of not being able to participate in these events,” he wrote, “I cannot put myself or others at risk of getting this virus.”

Father Bassano said the WHO doctor gave a report on COVID-19 on Oct. 13:

• 2,783 confirmed cases throughout South Sudan with a reported 55 deaths.

Previously a priest in the Diocese of Syracuse, Father Bassano has served as a Maryknoll priest in Chile, Thailand, Tanzania, and steadily since 2014 in South Sudan. The upcoming winter issue of the Misioneros magazine (the Maryknoll Spanish-language mission magazine) features him on its cover.

“Fr. Mike does radiate joy and compassion,” wrote Maryknoll Deacon Paul Bork, Director for Mission Education and Promotion, East Region, Mission Appeals Team Leader, Maryknoll Fathers and Brothers. “He seems to be at peace knowing that he is where God meant him to be.”

Father Bassano also commented on the yearbook photo of him that the Sun published Oct. 1 — in cap and gown speaking as the president of his class at his 1967 graduation from Catholic Central High School (the present-day Seton Catholic Central) in Binghamton.

“Yes, we were much younger then,” he wrote, “but hopefully much wiser than that now.”

He sent along this poem that he wrote recently:

for each breath of life