Missionary/poet champions the hungry and ‘the poorest ones’ 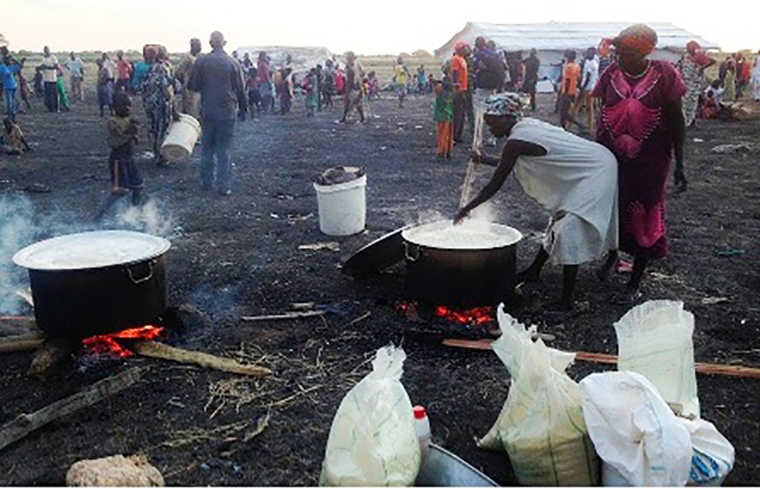 “Despite the COVID-19 crisis another critical issue is shortage of food with people going hungry in South Sudan,” reports Maryknoll Missionary Father Michael Bassano, a native of Binghamton.

He is the Catholic chaplain for people who have been displaced by civil war in the dusty UN Protection of Civilians (POC) camp outside the town of Malakal. Up to about 3,000 of the 30,000 displaced people are members of his parish.

Along with UNHCR (the UN Refugee Agency), Father Bassano has done a joint project with funds from the Maryknoll Society Famine Relief project, he said in a recent email. Here is his report on “how we are trying to help our people in these difficult times”:

Baliet County, which was once classified as a traditional cattle route between the Dinka and the Nuer tribes, was heavily affected by offensives early in the conflict throughout 2014 and 2015 that led to massive displacement of residents to various parts of South Sudan and to the neighboring countries. Father Bassano has played a vital role in assisting returnees to their places of origin in Baliet County.

The main objective of the mission was to assess and monitor the general protection situation especially after the breakout of COVID-19 in South Sudan. “It is slowly affecting our people,” he wrote, “and we pray that The Beloved God watch over and protect the poorest ones.”

While UNHCR was conducting its activities, Father Bassano wrote, a representative of Solidarity with South Sudan assisted with supplying rice for 350 households (1,400 individuals) considered to be the most vulnerable families in dire need of food.

The rice was financed by the Maryknoll Society Famine Relief project (based in the United States) and distributed through Father Bassano who represents Solidarity with South Sudan in Malakal.

The rice distribution mainly benefited persons with disabilities, single mothers, orphans, families supporting orphans, and people who are elderly or blind. Such project activities will continue supporting IDPs (internally displaced people) and other persons in need in Upper Nile state.

Father Bassano also donated 35 bags of rice (20 kg per bag) to the local orphanage in Malakal (children who live on the street and orphans); in total 41 children received three months’ worth of assistance.

Father Bassano “is continuing to respond generously to the many significant needs in his corner of South Sudan,” wrote Deacon Paul Bork, Director for Mission Education and Promotion, East Region of the Maryknoll Fathers and Brothers.

Also, Father Bassano and his partners have purchased a grinding mill with help of donations of people in the United States: “Our UNHCR partners will go out next week to bring it to those people in need in the three villages that will soon be able to grind sorghum in food to eat. Thanks to … all who have helped us in this endeavor.”

The situation of coronavirus in the area where Father Bassano ministers is getting worse, he reported:

“Recently two of our Indian soldiers were confirmed with the virus. One has already died and the other one is critically ill in the hospital in Juba. The virus is all around us now and we are trying to keep safe, healthy, and well. May Jesus our best friend watch over and protect all of us.”

Father Bassano, who is restricted in his movements due to the pandemic, tapes his Eucharistic celebrations for Nile Radio, the public station in the camp, and he continues to write poetry. Here is a poem he sent recently:

in dark of night

closely at my side

lifted up by faith

reaching for the stars

grasped by the hand

Cherished friend so near