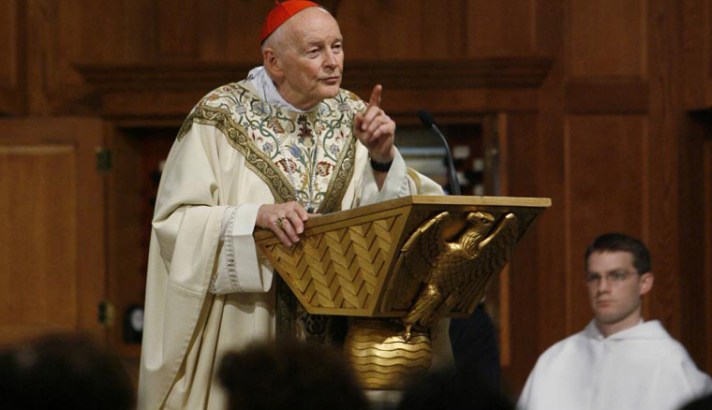 Cardinal Theodore E. McCarrick, retired archbishop of Washington, delivers the homily in 2009 at the Basilica of the National Shrine of the Immaculate Conception in Washington. Pope Francis has accepted the resignation from the College of Cardinals of Archbishop McCarrick, and has ordered him to maintain “a life of prayer and penance” until a canonical trial examines accusations that he sexually abused minors. (CNS photo | Nancy Wiechec)

“We can — and I am confident that we will — strengthen the rules and regulations and sanctions against any trying to fly under the radar or to ‘get away with’ such evil and destructive behaviors,” said Bishop Edward B. Scharfenberger of Albany, New York, in a July 27 letter to clergy in his diocese. “But, at its heart, this is much more than a challenge of law enforcement; it is a profoundly spiritual crisis.”

“In negative terms, and as clearly and directly as I can repeat our church teaching, it is a grave sin to be ‘sexually active’ outside of a real marriage covenant. A cardinal is not excused from what a layperson or another member of the clergy is not,” Bishop Scharfenberger said.

“A member of the clergy who pledges to live a celibate life must remain as chaste in his relationship with all whom he serves as spouses within a marriage. This is what our faith teaches and what we are held to in practice. There is no ‘third way,'” he added.

Bishop Scharfenberger said, “Abuse of authority — in this case, with strong sexual overtones — with vulnerable persons is hardly less reprehensible than the sexual abuse of minors, which the USCCB (U.S. Conference of Catholic Bishops) attempted to address in 2002. Unfortunately, at that time — something I never understood — the ‘Charter’ (‘for the Protection of Children and Young People’) did not go far enough so as to hold cardinals, archbishops and bishops equally, if not more, accountable than priests and deacons.”

He said he believes the “vast majority of clergy — priests, deacons and bishops alike — live or, at least, are striving to live holy and admirable lifestyles. I am ashamed of those of my brothers, such as the cardinal, who do not and have not.”

With his resignation July 28 from the College of Cardinals, McCarrick retains the title of archbishop. However, “his prompt reduction canonically to the laity should be strongly deliberated,” said a July 28 statement by Bishop Michael F. Olson of Fort Worth, Texas.

“As each day passes, we learn that the former cardinal not only allegedly perpetrated abuse against minors but also against subordinates including priests, seminarians and members of the laity. The evil effects of these actions were multiplied by the fact that financial settlements were arranged with victims without transparency or restrictions on the former cardinal’s ministry,” Bishop Olson said.

“Justice also requires that all of those in church leadership who knew of the former cardinal’s alleged crimes and sexual misconduct and did nothing be held accountable for their refusal to act thereby enabling others to be hurt.”

Trinity Washington University president Patricia McGuire, in a July 27 blog posting titled “Cardinal Sins,” reflected on the allegations against Archbishop McCarrick through the prism of her mother’s late-in-life dread that she may have exposed her young sons to abusive clergy.

“As the tawdry, tragic stories of priests committing appalling acts of abuse spread from Boston to Philadelphia and parishes and dioceses nationwide, the mothers of the altar boys, in particular, suffered silent grief and suspicion, leading to a sense of betrayal and then alienation from the church to which they had devoted unquestioning loyalty throughout their lives,” McGuire said.

In the year before McGuire’s mother died, “the abuse scandal left her bitter about the hypocrisy of priests and bishops; she wondered aloud about her own father, my grandfather who, as a young man in Milan (Italy), had been in the seminary for a while. He left the seminary and came to America and, in my mother’s memory, he would not set foot inside a church. ‘All’s right between God and me,’ he would say to her,” she wrote.

“The emergence of the American abuse scandal made her wonder if something had happened to her father even so long ago in the Italian seminary; again, no evidence, but the scandal created more doubts, caused more anguish, like a rapidly spreading toxic algae bloom.”

McGuire added, “The church’s response to the massive sex abuse crisis has always seemed to lack a certain level of deep, urgent understanding of the gravity of the sin against children and other victims. Certainly, words have cascaded, gestures made, money paid out. But, somehow, the words and gestures and checks have all seemed more self-protective of the organization than truly penitential at the most profound level.”

“As a father, I am appalled and angry. As a Catholic, I feel ashamed and betrayed,” said a statement from John Carr, director of the Initiative on Catholic Social Thought and Public Life at Georgetown University, who had worked closely with Archbishop McCarrick on various policy initiatives when Carr worked at USCCB headquarters in Washington.

“As a friend of former Cardinal McCarrick, I am devastated, especially for the victims and their families,” Carr added. “I pray that these horrific developments can help end this evil of clerical sex abuse and dismantle the culture that permitted it within our family of faith.”

Msgr. Owen Campion, former editor of the national newspaper Our Sunday Visitor and now chaplain of OSV Newsweekly, said he felt dismay, revulsion, heartsickness, anger and — for once — weariness upon learning of the accusations lodged against Archbishop McCarrick.

“I am tired of stepping away from restrooms in restaurants until a youth has emerged. I am tired of watching my every move and calculating my every word if a young person is present. I am tired of calling my diocese when I have been invited to preach in another location, asking for a letter stating that I have never been in trouble.”

He added that he is tired of making the point that “sexual abuse is a vast problem in our culture,” because he is “assailed for concocting excuses.” “But I make it again,” he said.

Msgr. Campion said, “One excuse that I have offered with increasing lack of enthusiasm is the Dallas ‘Charter,’ a policy created by U.S. bishops to right the wrongs. The charter, whether it is followed or not, spoke of children, but attention must also be given to the wide sexual abuse of adults.”

He added, “A seminarian would have to be very brave to accuse an archbishop, let alone a cardinal. The seminarian, however persuasive his story, would not enjoy the benefit of the doubt. Quite likely, he could forget about being a priest.”

In Baltimore, Archbishop William E. Lori said allegations against Archbishop McCarrick “have shaken our church to its core.”

“That we find ourselves in this place again is tragic and heart wrenching — for the victims; for their families and friends; for all Catholics; and for our neighbors whom we are called to serve in truth and love,” he said in a July 30 statement.

He said he strongly supports Pope Francis’ response to Archbishop McCarrick’s case and other recent cases, including accepting the resignation of several Chilean bishops, and praised the pope’s “determination to hold accountable all those who have sexually abused others or failed to report allegations of sexual abuse, regardless of their position or rank in the church.”

Building on those efforts “to strengthen the accountability of bishops,” Archbishop Lori said, “some bishops in the United States are discussing proposals to do the same, (including) measures that can be implemented in each diocese to ensure that victims can easily report allegations of abuse by any member of the church, including bishops, and can confidently expect that those allegations will get a full and fair hearing.”

“I will contribute actively to those discussions and will fully implement their results in the Archdiocese of Baltimore to best protect those in our local Catholic community and all those we serve,” he said, pledging his “continued diligent oversight of the measures currently in place” and renewing his commitment “to do all I can to build a culture of accountability and transparency.”