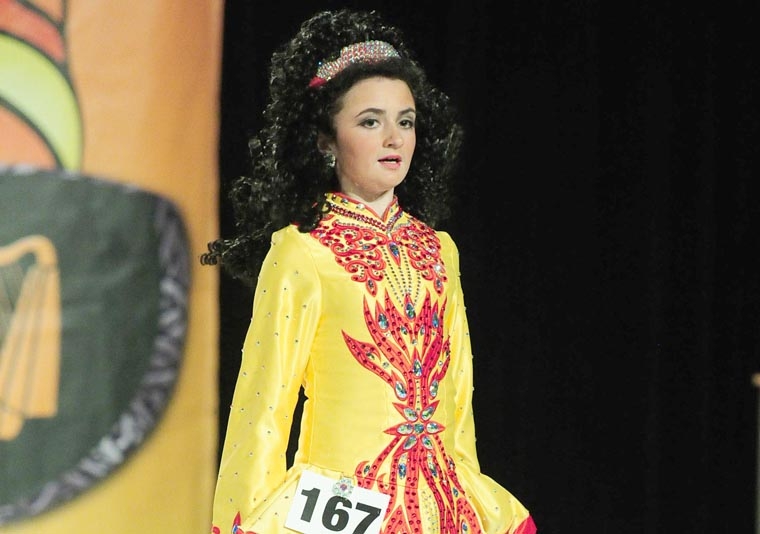 Aine McIntyre, a sixth grade student at Syracuse’s Most Holy Rosary School, is determined to place first in the qualifying event for the regional Irish Dance Championships held in July in Providence, R.I. Her goal is then to compete in the World Irish Dance Championship considered the Olympics of Irish dance, which will be held in Glasgow, Scotland next year.

Aine dances at the Johnston School of Irish Dance in Syracuse three days a week. She brings her water bottle and her dance bag filled with hard shoes, ghillies, tape, band-aids, blister booties and a stretch band with her.

As a young child, Aine was exposed to Irish dance through her attendance at the annual Irish Festivals at her parish of St. Patrick’s in Syracuse and Syracuse’s annual Irish festivals. It was watching a performance of  “Riverdance,” however, that sparked her interest in Irish dancing. “I thought it was amazing,” commented Aine.

Aine was named after and influenced by her maternal grandmother, a native of County Tipperary.

Aine began taking dancing lessons at the age of five and began competing at feisanna (the Gaelic word for Irish dance competitions) within seven months. She said she enjoys dancing because “I like the rhythm and moving around.”

Within the next two years, she was competing in regional and national competitions. Last March, Aine competed in Montreal. “I like seeing the sights in all the different places,” she said,“especially London — I was there for two weeks and I liked seeing things like Big Ben.”

“I was excited,” remembered Aine. “I was competing against 110 kids.” Aine struggles with severe asthma and her symptoms were especially intense that day. Despite her illness, Aine said, she placed first in the soft shoe competition in the second round.

Aine’s parents are proud of her accomplishments. Her father, Dan McIntyre, stated, “What makes me most happy about Aine’s success is that she is a self-driven competitor, and therefore each success along the way is the result of her hard work and dedication.”

Aine’s mom, Colleen Congel, commented on her daughter’s dedication to Irish dancing. “Aine is a driven child who has found her passion in life,” she said. “Aine often has to say to friends, ‘I can’t, I have dance,’ and to think that at 12, she is so committed to this hobby, it is a true testimony to her teachers Ann Johnston Sullivan and Patty Wilsch.”

Aine said she hopes to “do really good” at the world competition next year. “It’s nervewracking practicing for it,” Aine said. “But when I’m competing, I’m proud to be there.”

Know someone interesting in the diocese? Send your story and include photos to info@thecatholicsun.com