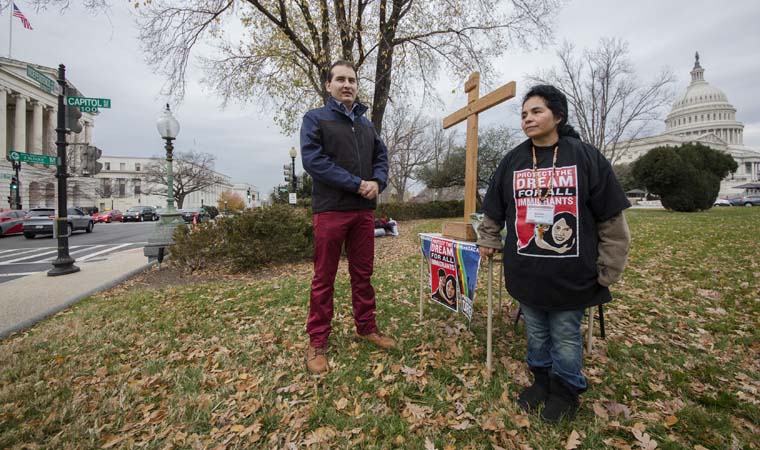 WASHINGTON (CNS) — Antonia Alvarez, the mother of three DACA recipients and one U.S. States citizen, began a 10-day fast Dec. 4 outside of the Capitol in Washington to advocate for the passage of the DREAM Act.

The measure would allow her children and 800,000 other Dreamers to remain in the country and gain a path to citizenship.

Alvarez is originally from Mexico City and said she immigrated to the United States 16 years ago because of dangerous conditions in Mexico. She currently lives in New Brighton, Minnesota, where she has done similar fasts throughout the past few years.

But after President Donald Trump announced in September that he would end DACA, the Deferred Action for Childhood Arrivals program, there was added urgency to Alvarez’s advocacy.

To get the attention of members of Congress, she decided she would need to travel to hold a fast right in front of their offices. In ending DACA, Trump called on Congress to come up with a legislative solution to keep the program by March.

Many are calling for passage of the proposed Development, Relief and Education for Alien Minors Act, or DREAM Act, to do just that.

Alvarez, a parishioner of Incarnation Sagrado Corazon in Minneapolis, traveled to Washington with a group of leaders from the Archdiocese of St. Paul and Minneapolis to speak with congressional leaders, then stayed behind to carry out the fast.

She said she planned to fast until passage of the DREAM Act or when Congress is scheduled to recess for the holidays Dec. 15.

Every day from 7 a.m. to 6 p.m., she planned to sit in a section of the Capitol grounds directly between the House office buildings and the Capitol, urging lawmakers take action on the bill.

“Sometimes I said, ‘God, I stay alone,'” she said, expressing fear about doing this by herself. “But I listen, (and hear) ‘You’re not alone.'”

Now she really isn’t alone. Daniel Galan, a 25-year-old electrician from Chicago, who saw on Facebook what Alvarez was doing and decided to hop on a bus from Illinois to join her.

Galan, a parishioner of St. Paul Catholic Church on Chicago’s South Side, was brought to the United States from Mexico City at age 8. He and his girlfriend are both DACA recipients, so he said he was doing the fast for the both of them, as well as for many other Dreamers he knows who couldn’t make the trip to Washington.

“Our family is poor. My mom didn’t see any future for me in Mexico, so she brought me here so I could go to school, work, and become something of myself,” Galan told the Catholic Standard, newspaper of the Archdiocese of Washington.

Alvarez’s three children who are DACA recipients are 24, 25 and 28 years old. Her oldest child is a businessman, and the other two are in school, with one getting her bachelor’s degree and the other pursuing her master’s degree. She also has a 12-year-old daughter who is a United States citizen.

“Every day she is crying for her brother and two sisters,” Alvarez said.

Alvarez, who has a house cleaning business in Minnesota, said her family has paid for all of her children’s education.

“We don’t want crumbs,” she said. “We are working for everything.”

Unlike herself, Alvarez’s kids are now in the legal system, she pointed out, since they had to give personal information and go through a vetting process to be covered by DACA. This would make it easier for them to get deported.

Alvarez was catching the attention of several members of Congress who have come out to speak with her, some of them bringing her hot water or inviting her inside for a break. But Alvarez declined to go inside, and instead invited them to come visit her whenever they want a break.

As the two stood outside next to their table that supports a large cross, Galan spoke about his hopes for the future. He has not seen his dad since he left Mexico, but speaks to him frequently; Galan’s mother and brother live in the United States.

Galan hopes to someday get a green card so he will be able to travel back and forth to visit his dad, and maybe someday bring him to the U.S. legally if he becomes a citizen.

He hopes to start his own electric company. But he fears that he will lose his job once his DACA benefits expire, since the company he works for checks on employees’ legal status. He recently renewed his DACA participation; it expires in March 2019.

But until Congress passes a more permanent piece of legislation, Galan said he would “be contemplating the day I lose everything I’ve worked for.”

Noting her family’s situation, Alvarez said, “My kids are afraid, but I’m not afraid. I’m fighting for protecting my children …Always I pray to God, always I believe in God, always my faith is in God.”

With tears in her eyes, Alvarez said one of her daughters feels so afraid that she wants to leave the country and move to Ghana, where her boyfriend is from, because she thinks they would not be discriminated against there.

Alvarez said she not only prayed for her own family and for Dreamers, but also for Trump, asking God to bless him.