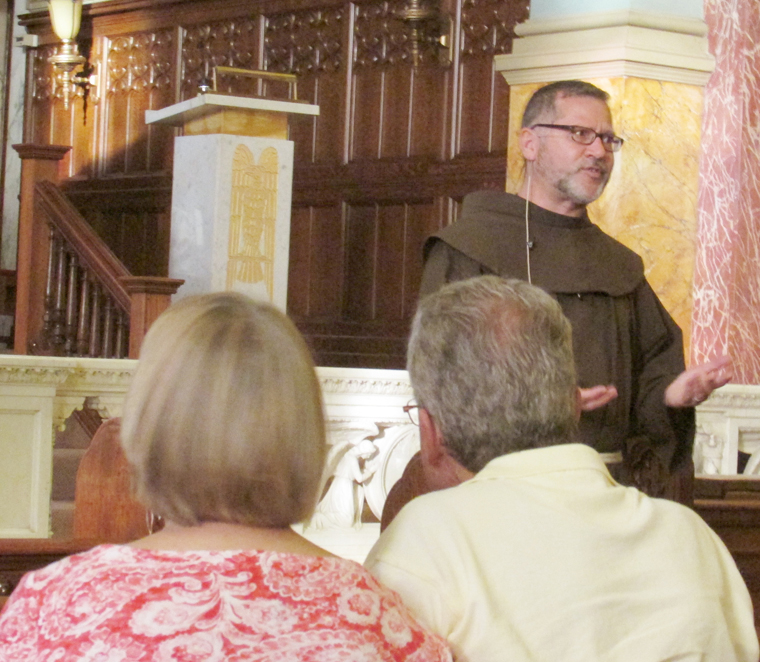 Father Michael D. Calabria, OFM, Ph.D., understands Islam as a scholar, admires it as a Franciscan, and empathizes with it as a traveler who has seen the plight of refugees.

Father Calabria, the director of the Center for Arab & Islamic Studies at St. Bonaventure University, shared his multifaceted perspective on Islam on June 17 at the Franciscan Church of the Assumption in Syracuse. He spoke in front of about 30 people on “Catholic-Muslim Relations: a Franciscan Approach.”

Assumption parishioner Kevin Elphick, a Third Order (secular) Franciscan, said in an email that Father Calabria’s talk was “all the more significant as we begin healing in the aftermath of the recent Orlando tragedy.”

One aspect of the Franciscan approach to Islam is a concern for refugees from the Middle East, including those from Syria.

In an interview before his talk, Father Calabria said it is incumbent upon people of faith, particularly Jews, Christians, and Muslims, to be helpful, “because we share a common ethos to take care of the stranger in our midst.

“I have seen the Syrian refugees firsthand,” he said, “when I was in Turkey in the fall. I have seen women walking the streets of Turkish cities with babies in their arms living outside with no place to go, and no resources.

“That’s the reality of the Syrian refugee crisis that Americans don’t see. I could not in good conscience turn away a woman with a baby in her arms from my door, if she came to my door. And those Syrian refugees are knocking at our doors and saying, ‘Help us.’”

Father Calabria feels it is natural to admire Islam. For one thing, Islam shares some beliefs with Christians and Jews, he said.

Also, Muslims have been coexisting with non-Muslims in this country since its founding, if not before, and he would like to see that tradition continue in an atmosphere of mutual respect.

Furthermore, “Every person on the face of this earth who prays to some deity has some glimpse of divine truth,” Father Calabria said.

Muslims “have been active in every profession,” he said. “They have farmed the lands of the West; they are doctors, lawyers, teachers, and have been. They are part of the American fabric; they are part of American history. Muslims are not new arrivals.”

Primary for practitioners of Islam, he said, is the oneness of God.

“That is, there is nothing that is worthy of our worship, other than God.”

Third is a sense of divine revelation. “That is, this God has communicated to humanity through sacred scripture. And … from an Islamic perspective, that would be the Torah, of Judaism; the Psalms of David; the Gospel of Jesus Christ; and the Qur’an,” he said.

“From a Qur’anic perspective, the first prophet is Adam,” he said, “because Adam is the first individual to recognize the one God.

“And so Islam shares with Judaism and Christianity many of the prophets from Hebrew scriptures, but also John the Baptist and Jesus, from the Christian scriptures; and Muhammad is considered the last of God’s prophets.”

Another shared belief among the three religions, Father Calabria said, is that creation as we know it ends in an apocalypse. That is the fifth principal belief, he said: that all people are called to judgment before God.

“So you see there are many essential commonalities there,” he said.