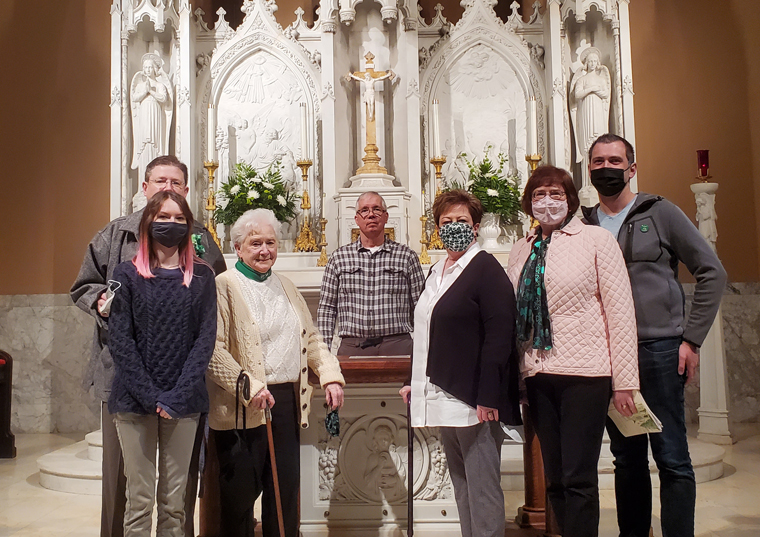 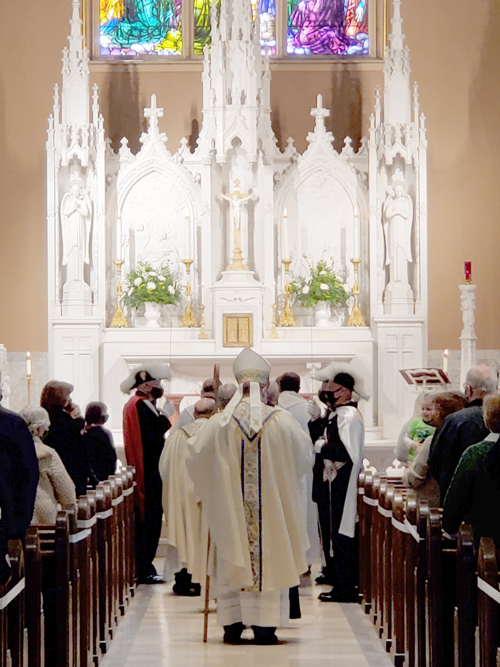 BINGHAMTON — It was a special day at St. Patrick’s Church March 17, and not only because it was the patron saint’s feast day. Bishop Douglas J. Lucia presided at a Mass that also included the dedication of a new altar.

The altar is made of oak with legs at each corner, representing the four Gospels of Matthew, Mark, Luke, and John. A Carrara marble relief, formerly part of altar gates, is on the front. The altar stone carries a relic of St. Patrick himself.

Kathleen Maher Foley, a lifelong parishioner, said the relic was given to her mother.

The relic is visible at the bottom of the altar stone. Part of the intricately designed altar was put together by parishioner Mark Arrow, a fifth-generation stone mason, who specializes with churches.

“I’ve been working with St. Patrick’s Church for the last 25 years or more,” Arrow said. “I actually go all over the world,” he added. “I’m an architect, engineer, and builder.”

Arrow refurbished the ambo and baptismal font before taking on the altar.

“Father and I started talking about this five years ago,” said Arrow. “Last fall I finally nailed it down to this design concept, using old marble I found downstairs.”

“There was one thing he carried with him. There was one spark that he was able to hold onto and it was the spark of his faith,” he said.

When freed, the bishop said, Patrick sought to return there with the light of faith to the people.

“He was born to be a missionary, going back to the land of the Celts and this time bringing with him the Gospel,” he said. 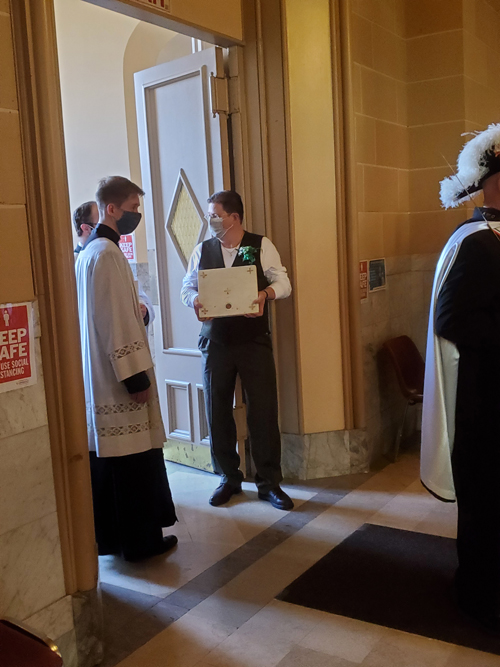 Jim Foley holds the altar stone containing a relic of St. Patrick donated by his family.

“Patrick himself would return to the same people who had imprisoned him as a witness to them, a witness of this God, seeking to drive from Ireland the darkness of sin,” he added.

The bishop noted that it wasn’t just candles, but also large bonfires that would light Ireland for the Easter Vigil in Patrick’s time.

“We are being invited this day to consider in our own lives the intensity of the light of Christ,” he said.

The bishop also spoke of St. Patrick’s influence in many places, including Africa. He told of the new papal nuncio to Ireland, from Nigeria, whose grandparents were served by Irish missionaries.

“Think of all the continents of the world in that way — what happens when the light of Christ comes.”

“The relic that is contained now in this altar — that relic came from Ireland. It came eventually into the hands of the Foley family, but again it’s a symbol of faith being handed on,” the bishop said.

Bishop Lucia put the stone containing the St. Patrick relic in the altar. He later blessed it with holy water and incense.

The blessing concluded with these words: “Here may he draw us close to Christ, the living stone and, in him, grow into a holy temple. Here may our lives of holiness become a pleasing sacrifice to your glory.”