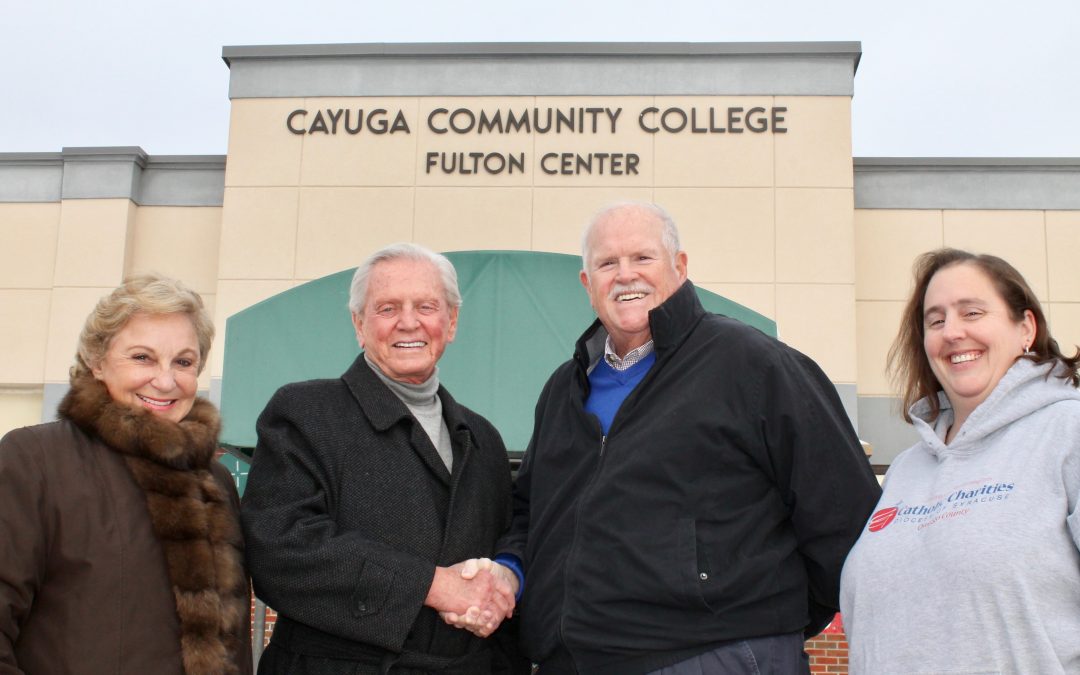 Michael J. Falcone, founder and chairman emeritus of The Pioneer Companies, was trying to decide the best use for a former retail site that for 15 years had housed Cayuga Community College’s Fulton extension.

His wife, Noreen, suggested Catholic Charities might need it. The couple consulted with Bishop Robert J. Cunningham and learned that Catholic Charities of Oswego County (CCOC) had been increasing services and in the past 18 months had doubled its staff to 80. It was quickly outgrowing its current site, a former woolen mill on the Oswego River in Fulton.

The Falcones, Bishop Cunningham, and CCOC executive director Mary-Margaret Pezzella-Pekow toured the Pioneer property, on state Route 3 on the city’s western edge, and “said, ‘Geez, this is perfect,’” Falcone recalled.

And so Falcone donated the $80,000 square foot site, paying about $70,000 to remove asbestos from the floor tiles. The building, in a strip mall that originally housed Jamesway discount store, is assessed at $3.3 million.

The Falcones are pleased the donation will help CCOC in its mission to assist people throughout the rural county. “It’s a major, major area geographically,” Falcone said.

“It’ll help a lot of people,” he said. “That’s what life is all about. If you’ve been blessed, like we have, you have an obligation to give back.”

Catholic Charities in the Syracuse Diocese spent 9.59 percent of its budget on administrative services and 1.23 percent on fundraising last year, according to the agency’s annual report.

Pezzella-Pekow said the donation will allow the agency to provide accessible facilities for clients and staff, and will allow construction of a community room for use by other organizations. At the same time, “everything we are doing here we are going to continue” in the new building, she said.

Renovations will cost somewhere between $1 million and $1.5 million, and will require a capital campaign, she said. Plans are for the facility to be ready for occupancy in the spring.

“There is a lot of need in our county,” Pezzella-Pekow said. “It’s a rural, impoverished county.” The agency gave out 500 food baskets at Thanksgiving and is preparing to distribute Christmas baskets. It provides services for children at risk of being placed in foster care and for adults who struggle with mental illness. Last year, 1,416 at-risk families and children received services. Transportation also is a major need. CCOC provides transportation for children and adults to mental health appointments, for example.

CCOC has been increasing services largely because of changes in Medicaid, Pezzella-Pekow said. Those changes are designed to provide people with services they need in the community and thereby keep them from ending up in a hospital emergency room, she said.

But the two-story, 200-year-old current site at 365 W. First St. is inadequate. Floor space is 32,000 square feet. Parking is limited, forcing the agency to use lots several blocks away.

So the timing of the gift, when The Pioneer Companies was coming out of a lease with CCC for the building, was ideal, Falcone said.

Tracy Kinne is a freelance writer who lives in Oswego County.