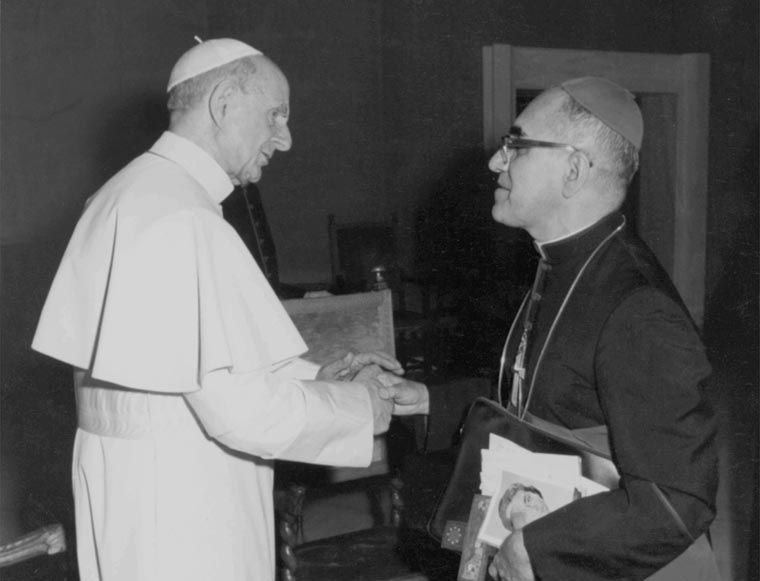 ROME (CNS) — Blesseds Paul VI and Oscar Romero crossed paths on their road to sainthood and formed a personal friendship that strengthened each other’s resolve in the face of growing challenges, an Italian professor said.

According to Roberto Morozzo della Rocca, a professor of contemporary history at Roma Tre University and author of a biography of Blessed Romero, said that Blessed Paul had a deep appreciation and affection for Blessed Romero, despite the rumors and gossip that floated around the Vatican corridors.

“We can say that Paul VI protected Romero. In Rome, there was a flood of negative information regarding the archbishop of San Salvador. They accused him of being political, of being a communist, of being heretical,” Morozzo said Oct. 9 at a conference at Palazzo San Calisto in Rome.

The event, sponsored by the Salvadoran Embassy to the Holy See, reflected on the friendship between the pope and the Salvadoran archbishop who were scheduled to be declared saints by Pope Francis Oct. 14.
Manuel Roberto Lopez, El Salvador’s ambassador to the Holy See, said the canonization of Blessed Romero “seemed like an impossible dream for us Salvadorans,” and his being declared a saint alongside Pope Paul was the culmination of “a history of friendship.”

Pope Paul “saw (Archbishop) Romero as an oasis in the desert, amid so much misunderstanding. And through (Paul VI’s) support, Romero found the strength to remain in the country and continue his pastoral service despite the dangerous circumstances,” Lopez said.

Although the archbishop of San Salvador enjoyed the trust of Blessed Paul VI, many within the Roman Curia viewed him in a negative light after he became more vocal against the right-wing paramilitary government following the assassination in 1977 of his friend, Jesuit Father Rutilio Grande.

Father Grande was known as a champion of the poor and the oppressed at a time when El Salvador was on the threshold of a civil war, one that eventually killed over 70,000 people.

His death at the hands of El Salvador’s notorious death squads is believed to have been the inspiration for Archbishop Romero — known for being less outspoken — to take up the mantle of defending the poor as Father Grande did.

One of the first meetings between Blesseds Paul VI and Romero, Morozzo said, occurred shortly after he was named archbishop of San Salvador.

His appointment had come as a surprise to many of the local clergy who perceived their new archbishop to be too conservative. The apostolic nuncio at the time, Archbishop Emanuele Gerada, had lobbied heavily for Archbishop Romero’s nomination, hoping that it would uphold the increasingly fragile relations with the government.

However, after the death of Father Grande, Archbishop Romero became more outspoken, which often drew warnings from the apostolic nuncio to exercise prudence. This prompted Archbishop Romero to travel to Rome and meet with the pope on March 26, 1977.

Pope Paul “told him fraternally a phrase that was the encouragement that Romero needed: ‘Animo! Tu eres el que manda!’ (‘Courage! You’re the one in charge!’),” the Italian author said.

Blessed Romero’s diary, Morozzo added, offered a glimpse into the mutual respect and affection between the two future saints during their next meeting in June 1978.

According to the archbishop, Pope Paul said, “I understand your difficult work. It is a work that perhaps may not be understood; you need to have a lot of patience and strength. I know that not everyone thinks like you; it is difficult in the circumstances of your country to find that unanimity of thought. Nevertheless, proceed with courage, with patience, with strength and with hope.”

After returning from Rome, Blessed Romero also delivered the pope’s words of encouragement to the people of El Salvador while celebrating Mass July 2, 1978.

“‘They are a people,’ the pope told me, ‘who fights for recognition, they look for a more just environment. And you must love the people, you must help them. Be patient, be strong and help them. And tell them the pope loves them, he loves them and is following their difficulties; but to never look for solutions through irrational violence, that they never let themselves be led by the currents of hate,” Blessed Romero said.

As he did until his martyrdom in 1980, Blessed Romero continued “to dream of a new heaven and a new earth” for the people of El Salvador, a country that, still today, suffers the scourge of violence, Morozzo said.

“I hope,” he said, “that (Blessed) Romero — along with Paul VI — will help to achieve this dream.”