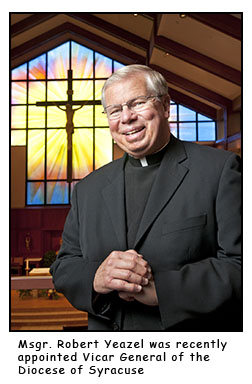 According to a press release by the diocesan Office of Communications, a Vicar General by definition assists the bishop with governance of the entire diocese. He possesses the “executive power to place all administrative acts with the exception of those which the bishop has reserved to himself or which in law require the special mandate of the bishop.” (Can 475 and can 479). Retired Auxiliary Bishop Thomas Costello held the position for more than 30 years.

Msgr. Yeazel brings distinguished credentials to the position. He was ordained a priest for the Syracuse Diocese in 1967 and then continued his education completing a master’s degree in child and family studies at Syracuse University. Ironically, the day his degree was conferred was the same day Msgr. Yeazel received his first chancery assignment as secretary to then-Auxiliary Bishop Frank Harrison.

Msgr. Yeazel’s priestly career has been a balance of parish life and chancery assignments. A native of St. Daniel Parish in Lyncourt, Msgr. Yeazel’s first parish appointment was as an associate at St. Patrick Church in Binghamton. He later served as an associate at the Cathedral of the Immaculate Conception. Msgr. Yeazel’s assignment as vice chancellor and secretary to Bishop David Cunningham took place from 1973 to 1977. In 1977 he was appointed chancellor of the diocese and continued in that position for three years. He was named pastor of Immaculate Conception Church in Fayetteville in 1980 and served there for 12 years. During that time, Msgr. Yeazel was appointed regional vicar of the Western Region of the diocese. From 1992 to 2000, he served as Vicar for Priests and co-chaplain for St. Anthony Motherhouse and the Dominican Monastery in Syracuse. He was appointed pastor of Holy Cross Church in DeWitt in 2000 and spearheaded the construction of the new church building.

Msgr. Yeazel’s service on diocesan and community boards include the Diocesan Finance Council, Priest Personnel Committee, Catholic School Board, Syracuse Area Board of Catholic Charities, Priest Senate, HOPE Appeal Advisory Board, Board of Directors for Francis House and Board of Trustees for Christian Brothers Academy and Le Moyne College.

Bishop Robert Cunningham and Msgr. Yeazel have been friends for 40 years having first met when they were both secretaries to bishops.

“When he was in Buffalo we would meet for dinner half-way in Rochester,” Msgr. Yeazel said. “We kept the friendship going all these years. He (Bishop Cunningham) is such an inspiration to my priesthood. He’s a man who is present to the people and he is concerned about the people.”

The office of Vicar General is defined in Canon Law. Besides those defined powers, Msgr. Yeazel said he hopes he will serve as a “sounding board” for Bishop Cunningham.

“I hope I can be a liaison to him with the various challenges in the diocese,” Msgr. Yeazel said. “Initially we will work with the chancery staff in the area of finance.”

He hopes to put in two to three days a week at the chancery offices spending the rest of his time shepherding the people of Holy Cross Parish. Thankfully, Msgr. Yeazel said, he has the assistance of Father Charles Vavonese and Father John Ahern at the parish.

“I think my biggest challenge will be balancing the hours between jobs. There are 1,900 parish families here at Holy Cross,” Msgr. Yeazel said. “I am blessed here to have a fantastic staff. I feel totally blessed.”

Msgr. Yeazel said he feels a renewed enthusiasm to his priesthood these days. “The confidence the bishop has shown in me has really renewed my priesthood,” he said. “I feel great joy in being able to share and help in anyway I can. I really enjoy working with him.”

Bishop Cunningham noted Msgr. Yeazel has served the diocese for 42 years and is “eminently qualified” for his additional responsibilities.

“I am delighted that Msgr. Yeazel accepted my invitation and appointment to be Vicar General of the Diocese of Syracuse,” Bishop Cunningham said. “His years as Chancellor, Vicar for Priests, Regional Vicar as well as his faithful shepherding at Immaculate Conception,  Fayetteville and Holy Cross in DeWitt make him eminently qualified for this additional responsibility. I look forward to working with him in this capacity and pray that his every effort will help us to be a more caring church and bring us even closer to Christ.”

Msgr. Yeazel admits that he has a lot on his plate but he said he is following the advice of St. Therese.

“She said there are two signs that you are doing what God wants you to do and that’s peace and joy and I have both,” he said.