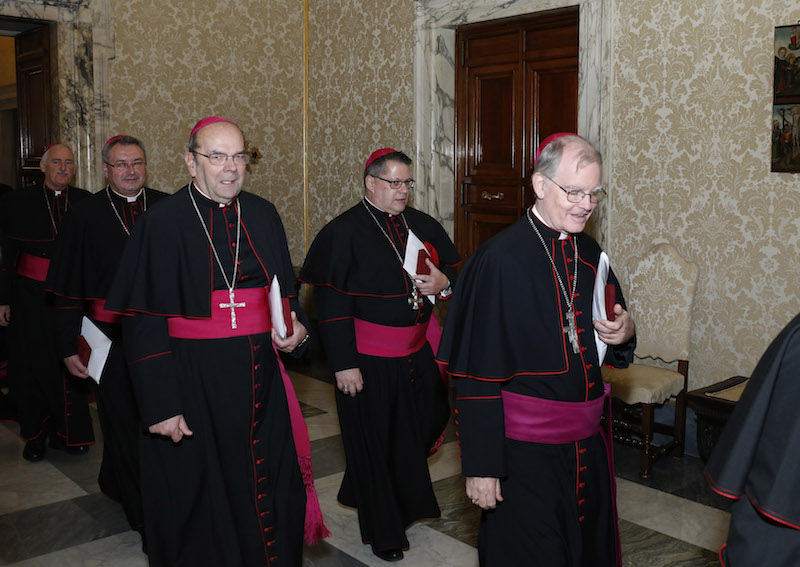 Retired Syracuse Bishop Robert J. Cunningham and current Syracuse Bishop Douglas J. Lucia, along with other bishops from the state of New York, walk through the Apostolic Palace after meeting Pope Francis at the Vatican Nov. 15, 2019. The bishops were making their “ad limina” visits to the Vatican to report on the status of their dioceses to the pope and Vatican officials. (CNS photo | Paul Haring)

VATICAN CITY (CNS) — When Pope Francis met with bishops from New York state, he expressed his gratitude, recognizing the difficulties many of them were facing, said Bishop Edward B. Scharfenberger of Albany.

At the meeting Nov. 15, Pope Francis told the bishops from the eight dioceses to speak frankly and from the heart; “it was intense, in terms of the painful situations we shared,” the bishop told Catholic News Service.

But at the same time, the Albany bishop said, “it was joyful, there is a sense of hope,” because of the sincere listening, understanding and desire to support dioceses they experienced during the papal audience and the series of meetings with officials of the Roman Curia during their Nov. 11-15 “ad limina” visit.

“It was very, very edifying. I don’t want to paint a rosy picture because the topics were not easy,” he said in an interview a few hours after the papal audience.

Each bishop, he said, talked about issues that were “close to their own hearts, like myself, I spoke about the work we’re trying to do in assistance to victims and survivors” of clerical sexual abuse. Other issues brought up by the other bishops, he said, included education and the plight of immigrants.

“What was heartwarming was how you could tell that Pope Francis was listening with his heart, and he expressed his gratitude realizing that we are in difficult situations where there is lots of pain and expressed great admiration for the work that’s been done.”

Bishop Scharfenberger said the pope’s pastoral approach, “his fathering, his brothering,” and the way he shows compassion were “just so evident” that even though the discussion touched on painful situations, the pope was able to convey a sense of hope.

The discussion, he said, “was very frank; he expressed that there were things that he didn’t understand, that we all make mistakes, we all have to learn, so don’t be afraid of making a mistake.”

During the week, while the bishops were praying at the tombs of the apostles and meeting with Vatican officials, media reports emerged concerning two of the bishops on the trip. The reports said Bishop Nicholas A. DiMarzio of Brooklyn was accused of sexually abusing a minor in the 1970s — a claim he strongly denied — and that Bishop Richard J. Malone of Buffalo would step down after an apostolic visitation of his diocese amid claims of his mishandling of abuse allegations.

Still, Bishop Scharfenberger said, “as the week went on, it wasn’t that that wasn’t there, but the focus was really on gratitude to God” and certainty that God will show them the way forward.

During the ad limina visit, he said, “We talked about, for example, how sometimes we get misrepresented in the media,” and the bishops admitted they need to communicate better. “We have not always risen to the challenge to communicate effectively, transparently. So, there was plenty of admission of failures and of the need to grow and of things to be learned that we didn’t know.”

But all those conversations, he said, took place in “an atmosphere of ‘How can we help one another? How can we do better what we’re called to do?'”

Ad limina visits are meant to underline and strengthen the unity and fraternity, and in fact, the bishop said, “there’s really a feeling that we’ve got one another’s back.”

Asked about finding the right balance when studies on clerical sexual abuse found that transparency and accountability were often neglected or ignored out of a desire to support one’s priests or brother bishop, Bishop Scharfenberger said their relationships must be “based upon truth and honesty and openness; it’s not an old boy network.”

The bishops also spoke to the pope about how in the United States some Christian principles are treated as political or partisan issues and, therefore create division. The pope was aware of the situation, he said.

“He thanked us very much for our stance in defense of human life and specifically mentioned our resisting the culture which treats unborn lives as dispensable,” he said.

The pope invited the bishops to ask him questions, he said, and one bishop asked what the most pressing issue was for him, to which he said, the family, the many pressures they deal with and the need to help them stay together.

In reference to some media reporting signs of resistance in the U.S. church to the pope, one bishop told the pope they wanted to assure him that they felt “very bonded” to him. Bishop Scharfenberger said the pope replied, “I never doubted that.”

Bishop Terry R. LaValley of Ogdensburg, New York, told CNS that during visits to the Curia, “there was an energy, an excitement, a real passion when they start speaking about evangelism, possibilities.”

When asked what he would tell the pope if he had the whole papal audience set aside just for him, he said he would tell him to “continue with his outreach and love to the marginalized, continue to challenge your priests to stretch themselves and in the process he shows us how,” said Bishop LaValley

“He’s a walking Gospel,” the bishop said Nov. 12. “Watch him” and the way he reaches out and interacts with people.

“That’s what church is, that’s what a disciple and mission is about, that kind of encounter and I’m very intrigued and very encouraged by that message,” Bishop LaValley said.

The pope’s way of pastoring, he said, is “a good personal challenge for me as a baptized Catholic and as a leader, to be the kind of person that can shepherd by living it, rather than just getting up front and saying, ‘You should do this and you should do that.'”

“I find that more attractive than just pointing fingers,” he said.