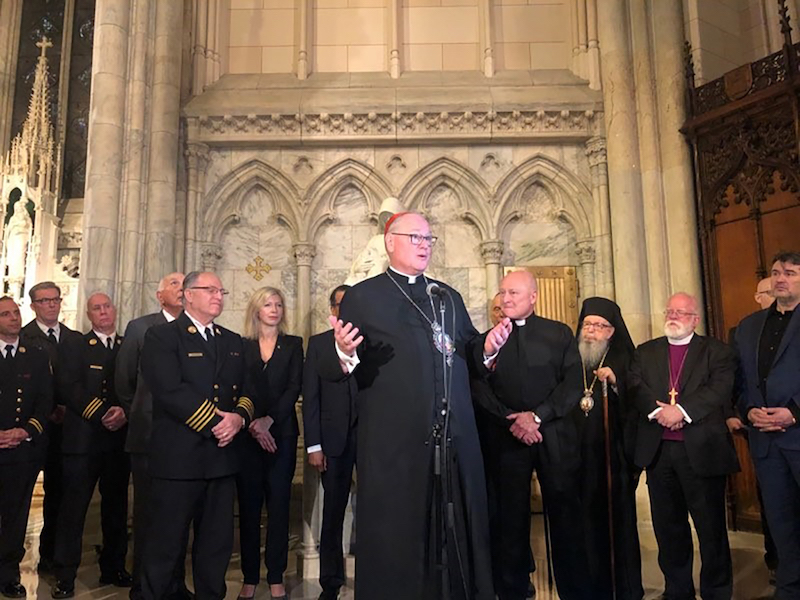 He made the comments April 18 on “Seize the Day With Gus Lloyd,” which airs on SiriusXM’s The Catholic Channel. By the time of the interview, about $150,000 in donations had already been received.

A website has been set up for the fundraiser, www.sptond.org. All donations will be sent to Paris Archbishop Michel Aupetit to assist with the restoration of the Notre Dame Cathedral and its numerous historical relics and artistic treasures.

Earlier in the day, Cardinal Dolan was joined by philanthropist Kenneth Langone, who is co-founder of Home Depot, Consul General Anne-Claire Legendre of France and other religious, business and political leaders to announce the fundraiser to help support the restoration and rebuilding of the Paris cathedral.

“Almost from the very first moments we heard the awful news that Notre Dame was ablaze, New Yorkers of all faiths, Catholic and non-Catholic alike, reached out to me to express their sorrow at the devastation and ask how they could help,” the cardinal said at a news conference.

Langone, “in his typically generous way, called and said, ‘We’ve got to do something. Count me in,'” Cardinal Dolan said.

“From Saint Patrick’s to Notre Dame,” the cardinal said, “is a way for people from New York and around the country to contribute in helping rebuild this magnificent house of faith and monument to Western civilization.” He called it a “noble effort.”

Langone reflected on his role in the recent restoration of the 140-year-old St. Patrick’s Cathedral as being a motivating factor in his decision to help rebuild Notre Dame.

“As a leader of the effort to restore St. Patrick’s Cathedral,” he said, “I came to more fully understand how much this beautiful church meant not only to my fellow Catholics, but to all New Yorkers, as a spiritual refuge from the frantic pace of the city, a place of prayer and reflection, a home where all are welcome.

He added, “Just as I can’t imagine New York City without St. Pat’s, I can’t imagine Paris without Notre Dame, and want to do all that I can to help in this restoration effort.”

The major fire that destroyed much Notre Dame Cathedral’s wooden structure and collapsed its famed spire erupted the evening of April 15. Many symbols of the faith and cultural heritage of Catholicism survived. Father Jean-Marc Fournier, chaplain of the Paris Fire Brigade, is credited with saving a reliquary containing the crown of thorns and the Blessed Sacrament from the burning cathedral.

A police official said April 18 that investigators think a short-circuit most likely caused the blaze and was possibly linked to renovation work that started in January. So far, about a billion dollars have been pledged to help restore the landmark.

“So many New Yorkers said, ‘Boy, we’re crying for the people in Paris because we know how down and crushed we’d be if our beloved St. Patrick’s went,'” Cardinal Dolan said on SiriusXM. “So, I thought, let’s twin the two and so we started it — the ‘From St. Patrick’s to Notre Dame” fund — and people could contribute, and by the way, they already are.”