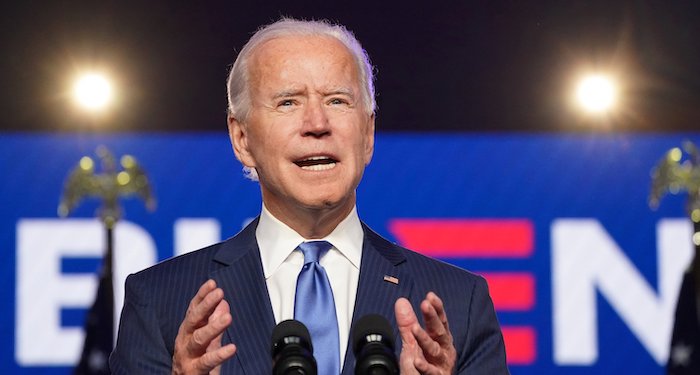 WASHINGTON (CNS) — Horns blared near the White House just before noon Nov. 7 as major U.S. news organizations projected Democrat Joe Biden will be the 46th president of the United States, making him the second Catholic in the country’s history to be elected to the nation’s highest office.

“Congratulations to our second Catholic President and our first female VP of African and Indian roots!” tweeted Bishop John E. Stowe of Lexington, Kentucky, shortly after organizations such as The Associated Press, The New York Times and Fox News announced Biden and running mate Kamala Harris had won the race.

The projection came following the announcement from Pennsylvania officials that Biden had won the state’s cache of 20 electoral votes, putting him over the 270 electoral-vote-threshold needed to secure a victory. Running mate Harris becomes the country’s first female vice president-elect.

Though President Donald Trump’s campaign launched legal battles over votes in some electorally rich states and made allegations of fraud in vote counting, even the president’s supporters, such as Fox News, said in a newscast after the race was called that they hadn’t seen evidence of widespread fraud.

Among Catholics, news agency AP VoteCast showed they were split between the two candidates, with 50% of Catholics backing Trump and 49% Biden, with most of the support coming from Latino Catholics, the second largest ethnic group in the church, who overwhelmingly cast votes for Biden.

Some Catholics said they could not support the Biden-Harris ticket because both support legalized abortion.

In reaction to announcement of the Biden win, Carol Tobias, president of the National Right to Life Committee, said the president-elect and his vice president “support radical abortion policies.” She expressed regret their administration is expected to roll back “protective legislation such as the Hyde Amendment” and support taxpayer funding of abortion.

But many Catholic organizations and even some bishops were tweeting or released statements of support for Biden shortly after news of his win.

Sister Simone Campbell, a Sister of Social Service, who is head of the Catholic social justice lobby group Network, said Catholics had responded to the president’s divisiveness and voted for a range of issues.

“Catholics are not single-issue voters,” she said in a statement. “Our community looked at the entirety of Donald Trump’s divisive and harmful record and chose to elect leaders who will govern with empathy and concern for the most marginalized. Catholics rejected racism, hatred and division and embraced the politics championed by Pope Francis — a politics of love and inclusion.”

“Congratulations to President-elect Joe Biden! We join in praying sincerely for his health and safety and that of his family,” Bishop Tobin wrote. “With the grace of Almighty God to assist and guide him, may he strive always to govern our nation with wisdom, compassion and moral integrity.”

Faith-based organizations that closely work with the Catholic Church on immigration issues, such as Hope Border Institute in El Paso, voiced support for a new administration and urged the presumptive president-elect to pass comprehensive immigration reform, to stop the building of the border wall, end a policy that keeps asylum-seekers to the U.S. in Mexico as they wait for their cases to be settled in U.S. immigration courts and end family separations among migrants.

“What we need now is moral leadership to bring us together and reject hate in all forms. As a fellow Catholic, we urge you to embrace the oppressed and vulnerable in our midst, who we believe are no less than the Christ knocking at our door,” the letter said.

Biden was set to address the nation the evening of Nov. 7.

Trump has not yet conceded the race. Instead, his campaign released a statement.

“The simple fact is this election is far from over. Joe Biden has not been certified as the winner of any states,” his campaign said in a statement released Nov. 7. “Beginning Monday, our campaign will start prosecuting our case in court to ensure election laws are fully upheld and the rightful winner is seated.”

Trump had claimed victory a few hours after Election Day, telling voters at 2 a.m. on Nov. 4, “Frankly, we did win this election,” saying “we want all voting to stop,” prompting protests even from fellow Republicans who said that it wasn’t his place to make that call and that all votes needed to be counted.

When he prematurely announced victory, the president also mentioned that “we’ll be going to the U.S. Supreme Court,” over the election.

But even supporters of the president and members of his party protested the comments. Mail-in votes postmarked by Election Day are accepted in several states and many are typically counted in the hours or day after the election, making it unclear what the president was referring to or what legal challenge he could possibly raise.

By midday Nov. 4, Trump’s 2020 campaign manager, Bill Stepien, said the campaign had officially filed a lawsuit in the Michigan Court of Claims to halt counting of ballots until it is granted “meaningful access” to the numerous counting locations “to observe the opening of ballots and the counting process, as guaranteed by Michigan law.

The “presidential race in the state remains extremely tight as we always knew it would be,” he said.

Later in the day, the campaign filed lawsuits in Pennsylvania and Georgia and also announced it would ask for a recount in Wisconsin. Republican lawyers had already legally challenged how Pennsylvania and Nevada handled absentee votes.

Carol Zimmermann contributed to this story.