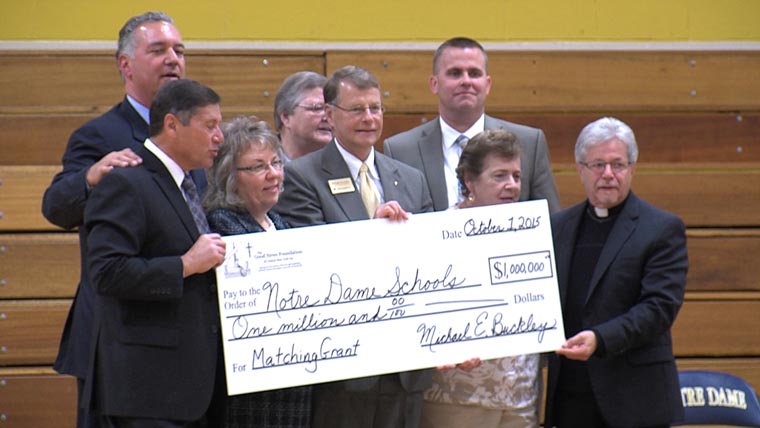 Board members give progress report on capital campaign

UTICA — It was fitting that a prayer began the Oct. 1 press conference at Notre Dame Jr./Sr. High School. For the past three years, since the launch of a multi-million capital campaign designed to promote the school as a regional leader in education, members of the campaign committee, the school’s board of directors, students, faculty and members of the community have prayed for the continued success of Utica’s only Catholic high school.

Father Joseph A. Salerno, pastor of Our Lady of Lourdes Parish, Utica, offered his blessing to all those in attendance at the press conference, especially the students. “May God give them knowledge that is rooted in the Gospel… and in doing so, [let them] find hope for themselves and for the world.”

Sister Anna Mae Collins, CSJ, principal of the school, offered words of welcome before John Snyder, an alumnus, chairman of the school’s capital campaign and a parent four students currently attending the school, took to the podium.

During the press conference the theme of the school’s capital campaign, “Making Our Kids World Ready” was unveiled. The theme was developed after the review of a Zogby Analytics study, which helped to hone the school’s vision and its priorities of restructuring its facilities and improving instruction methods for students. These improved methods include collaborative problem solving, critical thinking and creating relevant learning experiences in order to prepare them for the “real world.”

Jim Joseph, president of the Notre Dame School board of directors and dean of the Madden School of Business at Le Moyne College, recounted to attendees how at another press conference in June 2013, board officials signed an agreement with Bishop Robert J. Cunningham to lease the school’s property on Burrstone Road, formerly held by the diocese, to Notre Dame’s leadership team for $1 per year for 99 years.

“Two years ago we stood in this very spot and signed a historic agreement with the diocese. We announced the start of our capital campaign. What have we done since then? We have been very good stewards,” stated Joseph. “We have built a board of directors. We have become a leader in the community. We have created a management team that has achieved every goal that has been set. We have offered a scholarship program that is second to none and the envy of every school in the valley. We have seen enrollment grow to over ten percent in just two years. Tell me what other school in New York State is growing as fast [as Notre Dame] and has a waiting list for its elementary school? Notre Dame is an incredible success story and continues to be a shining example for the entire diocese.”

The multi-million capital campaign is in year three of a multi-phased plan. Phase one will result in the building of a multi-purpose auditorium/gym, with groundbreaking expected in spring 2016. This facility will provide an additional 14,000 square feet of space for theater, music recreation and athletics. The building will also serve as a public meeting and assembly venue for the Utica community and will be named in memory of the late Msgr. Francis Willenburg, beloved pastor of St. Agnes Church in Utica, and long-time supporter of youth sports programs in the area.

The second phase of the program is the establishment of a $4 million endowed scholarship fund to guarantee all students in the Mohawk Valley affordable accessibility to Notre Dame schools. Each year Notre Dame attracts a large number of applicants but not all students can attend due to financial constraints. With the establishment of an endowed fund, the school can award more than $200,000 grants a year, over and above its yearly scholarships, to students in financial need.

In the past three years, in addition to the rapid growth in enrollment figures, Notre Dame expanded its visual, music, performing arts curriculums and athletic programs. The school also boasts a 100 percent graduation rate, with 98 percent of its graduates attending college, and has awarded more than $7.1 million dollars in college scholarships and grant money

A highlight of the press conference was the presentation of an oversized $1 million check by Michael Buckley, director for the Good News Foundation, a non-profit Christian organization with a main focus on evangelization. The Good News Foundation initially pledged $4 million toward the capital campaign in matching grants to be distributed in increments over a four-year period.

“The Good News Foundation is primarily focused in the Utica area,” explained Buckley during an interview with the Sun. “We believe in evangelization and what better way to do that than promoting this school? We believe in what [Notre Dame] stands for and are excited to see the school continue to thrive and prepare future Catholic and Christian leaders for life,” stated Buckley.