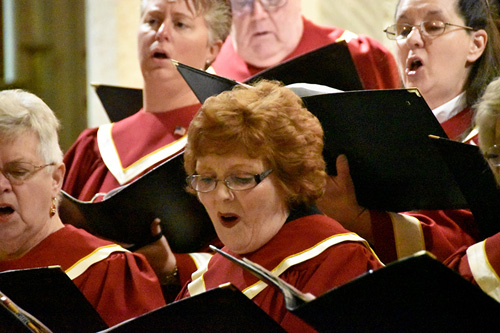 It was a gift from the gifted.

Singers and musicians offered a harmonious half-hour before Midnight Mass on Dec. 24 at the Basilica of the Sacred Heart of Jesus in Syracuse. The basilica calls the annual half-hour concert a Christmas gift to its parishioners.

The low lighting for the show allowed the sizable crowd to focus on the tunes produced by the basilica’s I.J. Paderewski Choir, directed by Basilica Music Director Frank Schultz; pianist Maryna Mazhukhova-Dubaniewicz; and flutist Tricia Park.

The power and smoothness of her playing prompted a couple of questions to pianist Mazhukhova-Dubaniewicz, of Fairmount: Why is she such a great pianist? Is it mainly her hands, or an innate ability instilled by her Republic of Belarus heritage?

Her answer: “Lots of hard work over the years.”

The veteran of solo engagements (concerti and recitals), tours, and broadcasts explained that from an early age she attended a specialized music school for gifted children in Minsk, Belarus: “We had several major lessons a week: solfeggio, music theory, music history, lots of performing, concert tours.

“We had great teachers who taught us to work effectively. Our school is still there nurturing and producing great musicians.”

She came to this country more than 20 years ago; her father worked at the United Nations, and she studied under scholarship at the Manhattan School of Music (MSM) — “also one of the best music schools in the world; I had a great time there!”

At MSM, situated right by Riverside Church and the General Grant National Memorial, she studied with Nina Svetlanova, whom she called “a great musician and wife of a famous Russian conductor.” She said MSM is also near the place where Sergei Rachmaninov used to live.

Mazhukhova-Dubaniewicz earned bachelor’s and master’s degrees at MSM, where she also met her husband, jazz saxophonist Michael Dubaniewicz, a university and private music teacher. He holds a doctor of musical arts degree from the Eastman School of Music. Their daughter, Alexandra, 15, sings at concerts, shows, and Christmas services, and she also dances, plays piano, and paints.

These days Mazhukhova-Dubaniewicz is the music director at Luther Memorial Lutheran Church in North Syracuse and the choir director at Faith Journey United Methodist Church in Clay. As a concert pianist, she performs whenever she gets the chance.

She said all the basilica choir members are her friends: “They have wonderful voices.” The choir members include her mother- and father-in-law, Carol and Alfred Dubaniewicz.

In her recitals she performs “lots of Chopin and people love it.”