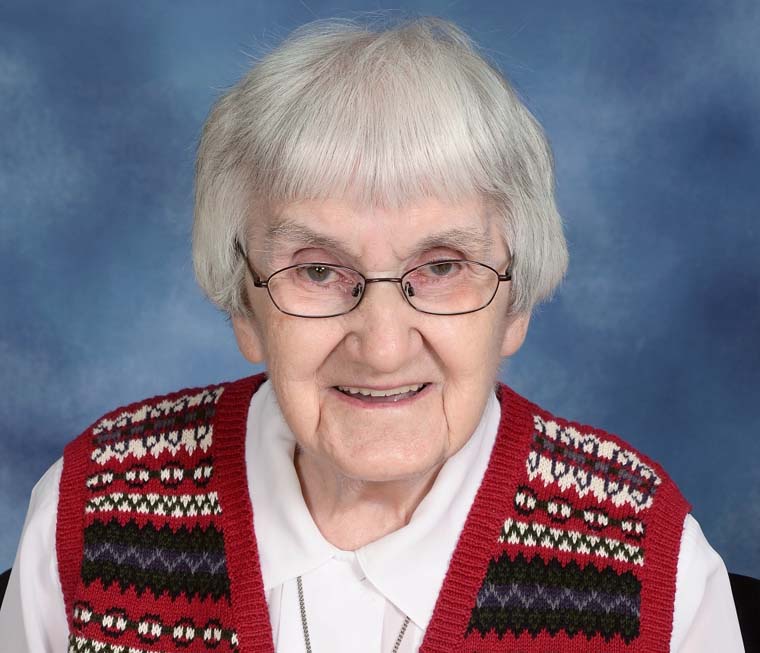 Sister Ann Therese, the former Mildred Frances Flynn, was born in Albany on Jan. 22, 1920, daughter of the late Patrick and Emma Rooney Flynn. She graduated from St. Ann’s Academy, Albany, and worked for 10 tears as a clerk for Harmanus Bleecker Library, the Works Progress Administration (WPA), and the New York State Department of Corrections. On March 19, 1948, Sister Ann entered the novitiate of the Sisters of St. Joseph in Troy; she professed final vows on Aug. 15, 1953.

Sister Ann received a bachelor’s degree and a master’s degree, both in history, from The College of Saint Rose. For nearly 50 years, she taught in schools in the Albany and Syracuse dioceses, including 18 years at the former St. Anthony’s, Syracuse, and 12 years at St. Jude’s, Wynantskill. In addition, Sister Ann was a home visitor in St. Lucy’s Parish, Syracuse, and served as coordinator of transportation at St. Joseph’s Provincial House.

Sister Ann Therese was a woman of profound faith, strong principles, and great conviction, especially regarding the dignity of the human person and a consistent ethic of life. As a Sister of St. Joseph, she was deeply devoted to prayer, community, and service to God’s people. As a teacher, Sister Ann sought to convey a thorough knowledge of subject matter in an environment that encouraged the development of self-discipline, hard work, and respect for others. She taught with her mind and her heart, all the while praying that her students would be equipped to face life’s challenges with moral integrity and a sound work ethic. In her later years, Sister Ann was a daily visitor to the infirmed Sisters at the Provincial House, bringing them a caring word and a thoughtful treat. In whatever she undertook, Sister Ann was direct and forthright, dependable and supportive, humble and kind, and her legacy will serve to inspire many for years to come.

Sister Ann Therese is survived by her nephew, Thomas Fox; her niece, Sandra Fox; and her niece-in-law, Margaret Aswad; by her grandnephews and grandniece: Patrick Aswad, Thomas Fox, Michael Fox, and Margaret Emily Young; by her dear friend, Carol Larkin; and by the Sisters of St. Joseph. In addition to her parents, Sister Ann was predeceased by her brothers: William Flynn, Thomas Fox, and James Fox; by her sisters, Eleanor Flynn and Emily Flynn; and by her nephew, Patrick Aswad.

Sister Ann Therese’s Mass of Christian Burial was held May 22 from the chapel of St. Joseph’s Provincial House, Latham.

Contributions in Sister Ann Therese’s memory may be made to the Development Office of the Sisters of St. Joseph, 385 Watervliet-Shaker Road, Latham, N.Y. 12110.