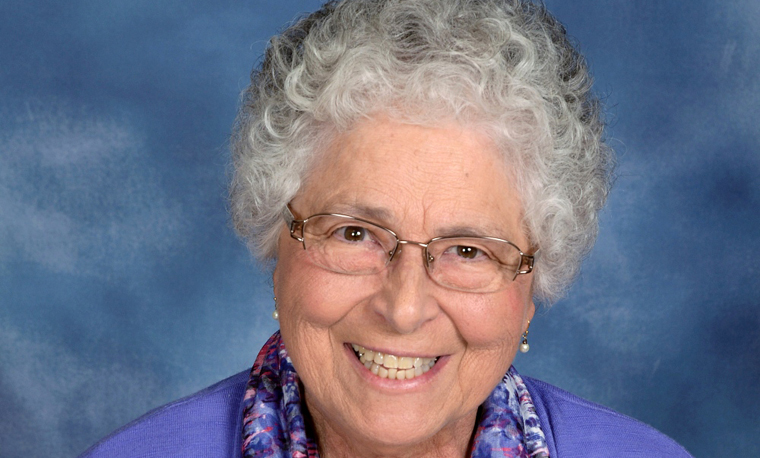 Sister Joan Teresa Harrington, CSJ (Sister Mary Howard), 86, died Dec. 13, 2020, at Samaritan Hospital, Troy. She had been a Sister of St. Joseph of Carondelet for 65 years.

Sister Joan was born on May 10, 1934, in Syracuse, daughter of the late Howard and Mary Rauch Harrington. After graduating from St. Anthony’s High School, Syracuse, she worked for New York Telephone Co. for two years. On March 19, 1955, Sister Joan entered the novitiate of the Sisters of St. Joseph in Troy; she professed final vows on Aug. 6, 1962.

Sister Joan received a bachelor’s degree in elementary education and a master’s degree in psychology, both from The College of Saint Rose, and pursued post-graduate studies in theology from Springfield College in Mobile, Ala.

For 28 years, Sister Joan served as teacher and principal in schools in the Albany and Syracuse dioceses as well as in the Dioceses of Atlanta and Savannah, Ga. In the Diocese of Syracuse, she taught at St. John the Baptist School and St. Lucy’s School, Syracuse, and was principal at Blessed Sacrament School, Johnson City, and St. Patrick’s School, Binghamton. In addition, she served as a pastoral minister in St. Patrick’s Parish, Adamsville, Ala., and as director of religious education in Our Lady of Sorrows Parish in Birmingham, Ala. In 2011, Sister Joan retired to St. Joseph’s Provincial House, Latham, N.Y.

Sister Joan was the second child born into a large, loving family and, if children might be molded by their upbringing, her family life was a wonderful introduction to community living and building healthy relationships. Sister Joan was faith-filled and fun-filled, prayerful and joyful. From her early years as a champion speed skater and swimmer to her years in ministry to her retirement days, Sister Joan was a natural connector with an innate gift of bringing people together and forming life-giving bonds.

In New York State and Georgia and Ohio and Alabama, as teacher, as principal, and as pastoral minister, Sister Joan brought her high energy, her lighthearted spirit, her contagious laughter, her ability to be nearly 100% present in the moment, and her heart waiting to welcome everyone. Sister Joan enjoyed life’s happy moments with gratitude and faced life’s hardships with courage and grace. She lived well the special call of the Sisters of St. Joseph by being a unifier and reconciler and epitomized the words of St. Francis of Assisi: “For it is in giving that we receive and in dying that we are born to eternal life.”

We will miss deeply Sister Joan’s presence among us but will treasure her legacy of hospitality, generosity of spirit, and remarkable zest for life.

Due to the continued health concerns regarding the COVID-19 pandemic, there will be no funeral services for Sister Joan at this time. A Memorial Mass will be scheduled at a later date.