On Annunciation, dozens of bishops dedicate their nations to Mary 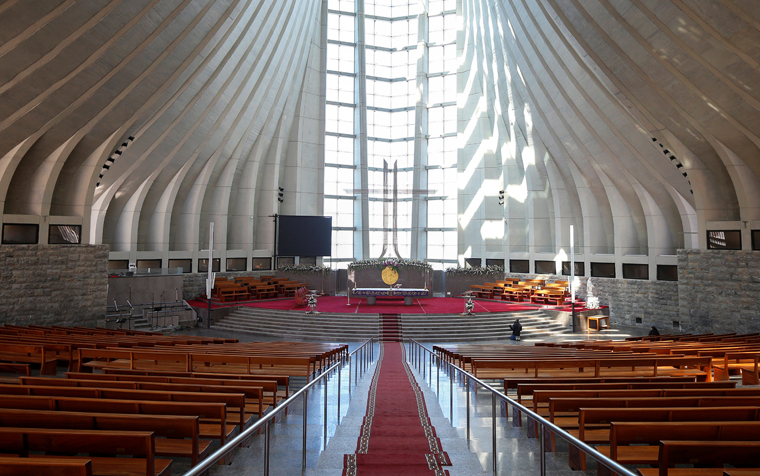 Church leaders around the world used the feast of the Annunciation March 25 to entrust their nations to Mary and Jesus.

Catholic leaders from 24 states sought divine help in ending the COVID-19 pandemic by consecrating their countries to Jesus and Mary during a March 25 ceremony in Fatima, Portugal.

“We wish to entrust our supplications to the Virgin’s maternal heart, so she may present them to God and intercede for us,” said Cardinal Antonio dos Santos Marto of Leiria-Fatima.

“Through the rosary, we will keep in mind both direct and indirect victims of this pandemic, as well as health professionals tireless in their efforts to help the sick and the authorities seeking to find solutions.”

In Harissa, north of Beirut, the towering white statue of Our Lady of Lebanon was illuminated the night of March 25 in the colors of the Lebanese flag. The lighting of the statue in red and white with a cedar tree was followed by the rosary, in the presence of a few priests, as Lebanese were confined to their homes due to COVID-19.

The ceremonies came as the number of cases of COVID-19 climbed. By March 26, there were more than 511,000 confirmed cases, and test kits were at a premium in many countries. The death toll was more than 23,000, with nearly 121,000 recovered.

At the Basilica of Our Lady of the Rosary in Fatima, where three shepherd children reported apparitions of Mary in 1917, the rector, Father Carlos Cabecinhas, noted that two of the shepherd visionaries, Sts. Francisco and Jacinta Marto, died in the influenza pandemic sweeping Europe after World War I.

The prayer of consecration to the Sacred Heart of Jesus and Immaculate Heart of Mary said all participating countries were now looking for God’s mercy and salvation as parts of the “pilgrim church on earth.”

“In this unique hour of suffering, assist your church, inspire the rulers of nations, hear the poor and afflicted, exalt the humble and the oppressed, heal the sick and sinners, raise up the dejected and discouraged, free captives and prisoners, and deliver us from the pandemic that strikes us,” the prayer continued.

“Support children, the elderly and most vulnerable, comfort doctors, nurses, health professionals and volunteer caregivers; strengthen families; aid us in citizenship and solidarity; be a light for the dying, and welcome the dead into your kingdom.”

In Harissa, Father Tabet told CNS, “People have become far from God and, with this disease, they understood that without God, they cannot do anything.” He likened the reliance on self to the story of the prodigal son.

“He (God) is waiting for us to tell him that we need him in our life, and the role of the Virgin Mary is very important to guide us to her son, as she did in the wedding feast at Cana,” Father Tabet said.

The Annunciation is significant in Lebanon, which has observed the feast as a joint Muslim-Christian national holiday since 2010. The lighting of Our Lady of Lebanon was chosen to coincide with the Annunciation, particularly in the absence of a public Muslim-Christian celebration due to the coronavirus. Such celebrations have taken place in Lebanon since 2007, an initiative spearheaded by a Sunni Muslim sheikh. Muslims and Christians alike visit the Our Lady of Lebanon shrine.

The lighting of the shrine and recitation of the rosary was broadcast live on several secular Lebanese TV stations, as well as on the country’s Christian stations, which stream online. Father Tabet said more than 1 million people “attended” the lighting via Facebook.