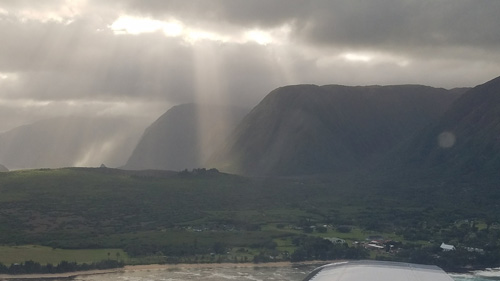 By Father Zach Miller | Special to the Catholic Sun 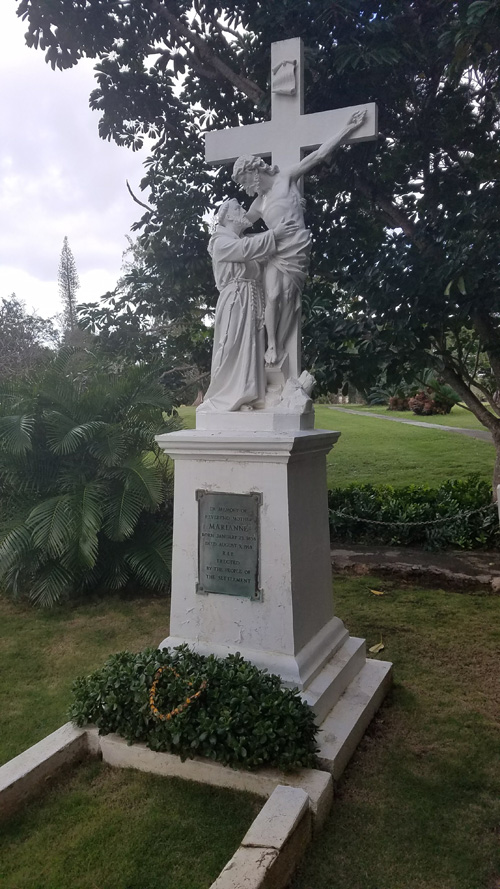 The memorial at the site of St. Marianne’s original grave. St. Marianne’s remains were brought to Syracuse in 2005 as her cause for canonization progressed. They were retured to Hawaii in 2014 and are now enshrined at the Cathedral Basilica of Our Lady of Peace in Honolulu.

Father Zach Miller, parochial vicar of Immaculate Conception Church in Fayetteville, recently made a pilgrimage to the Hawaiian island of Molokai. There, on the peninsula of Kalaupapa, the diocese’s own St. Marianne Cope ministered to patients with Hansen’s disease (leprosy) until her death in 1918. There, her memory and legacy live on.

Born Barbara Koob in Heppenheim, Germany, on Jan. 23, 1838, the small girl who would become St. Marianne emigrated to the U.S. with her family in 1839. The family settled in Utica, becoming members of St. Joseph’s Church there. Barbara entered the Sisters of St. Francis religious community in Syracuse in 1862, where she was given the name Sister Marianne. She served as a teacher and principal at several schools in the diocese before beginning her work as a hospital administrator, helping to found both St. Elizabeth Hospital in Utica and St. Joseph’s Hospital in Syracuse. In 1883, St. Marianne and six other sisters answered the call to minister to patients with Hansen’s disease on the Sandwich Islands, now Hawaii. From 1888 until her death in 1918, St. Marianne provided care for exiled patients on the Kalaupapa peninsula on the island of Molokai. Following decades of tireless work to promote her cause for canonization and the confirmation of two miracles due to her intercession — the medical healings of Kate Mahoney of Syracuse and Sharon Smith of Chittenango — Mother Marianne was declared St. Marianne, beloved mother of outcasts, in 2012.

Father Miller offered the following reflection on his experience at Kalaupapa.

I would first like to express “mahalo” (a Hawaiian word expressing thanks) to the Sisters of St. Francis of the Neumann Communities, especially Sister 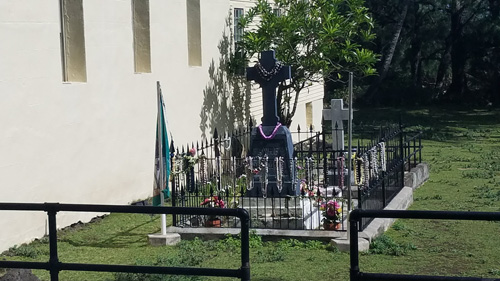 The memorial at the site of Father Damien de Veuster’s original grave. His remains were relocated to Leuven, Belgium, in 1936.

To visit the island of Molokai was a once-in-a-lifetime experience. As the small plane approached the landing area of Kalaupapa — which was not much of a landing area — my eye was deceived by the beauty of the land and the truth below. This small peninsula is surrounded by the Pacific Ocean on all three sides. On the landward side there is a 2,000-foot sea cliff, which is covered by beautiful greenery. One is truly lost for words in this heavenly landscape, realizing that it became a natural prison for the patients.

After landing we met our guide for the day, local priest Father Patrick Killilea. He explained that we had just landed on holy ground, and how the people with Hansen’s disease who were sent to Kalaupapa were exiled from society out of fear of the unknown. He went on to explain that the mission of Father Damien de Veuster and Mother Marianne was more than just taking care of the sick. They brought hope to the island. I found myself reflecting upon Luke 4:18: “The Spirit of the Lord is upon me, because he anointed me to preach the Gospel to the poor. He has sent me to proclaim release to the captives, and recovery of sight to the blind. To set free those who are oppressed.” It was God who sent them on this mission and through Jesus the Christ they were able to bring about healing.

Later that morning, during Mass at St. Philomena’s Church (one of the churches Father Damien founded) Father Badding mentioned in his homily that those who came to the island to help the patients were truly a light shining in the darkness. Mother Marianne brought hope to a place of little hope.

The peninsula of Kalaupapa.

As we traveled around the island, we met many people who all were noticeably very happy. One person said, “This is Kalaupapa — we have no fear.” Currently in the town of Kalaupapa there are about 150 permanent residents. Sixteen Hansen’s patients are still living — six still live on the island of Molokai. Father Killilea pointed out that the patients and workers now live side-by-side, no longer segregated.

One of the patients told me that the land is blessed. Upon reflection and seeing the connection the people have with God, the land, and their history, I saw that I was truly standing on holy ground. The patient said, “Mother saw us as people.” The locals refer to Saint Marianne Cope simply as “Mother.” Mother Marianne was truly a mother in this land. She cared for the whole person, creating a family on the peninsula of Kalaupapa.

The mission of Saints Damien and Marianne still lives on today. The Sacred Heart Fathers still have one resident priest and the Sisters of St. Francis carry on their mission of helping those who are sick. For over 135 years this mission has been alive and bringing hope to those who may have been forgotten. Due to the trust in God that St. Marianne possessed, she is truly an example for us on how to live out our faith. I know I will turn my prayers for those who are sick and in need of help to Mother Marianne.

We ask through the intercession of St. Marianne and St. Damien that the souls of the 8,000 individuals who died on Kalaupapa and their caregivers be at peace.