Once ‘spiritual, not religious,’ millennial finds freedom in Catholicism 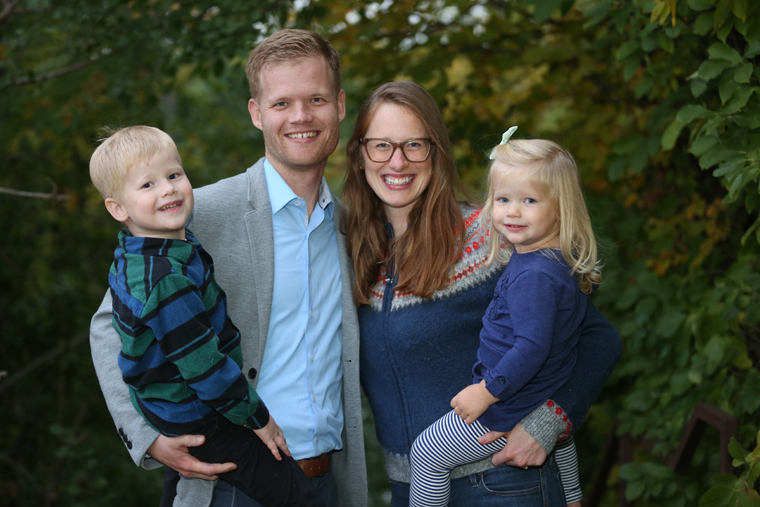 He painted houses in the summer, recorded music in the winter, and was making plans to go to Anglican seminary to become a self-described “slum priest.”

Today, at 34, he’s a Catholic family man. He lives in a modest Eden Prairie townhome with his wife, Brittany, 28, and their two young children, is a regular at incensed-enriched liturgies at Holy Family Church in St. Louis Park, and just published a memoir on his conversion, “An Immovable Feast.”

To some of his contemporaries, Blanski’s conversion may look like nothing more than an abandonment of authenticity and autonomy for a life of bland conformity. Now a Catholic for four years, he has found the opposite to be true.

“Catholicism, as foreboding and frustrating as it might look like from the outside, actually is freedom,” he told The Catholic Spirit, newspaper of the Archdiocese of St. Paul and Minneapolis.

Published this past spring by Ignatius Press, Blanski’s “An Immovable Feast” is being hailed by Catholic thought leaders, including fellow converts Scott Hahn and Peter Kreeft, as a conversion story for the millennial generation.

It’s not Blanski’s first book. The Twin Cities native, who says he’s wanted to be nothing but a writer since his college days, published two earlier works, one on sacramental sexuality and the other on Christian wonder.

But “An Immovable Feast” had a far different impetus. For Blanski, conversion was a “traumatic” experience, involving conflict with his mostly Protestant family and giving up his desire to be an Anglican priest when on the verge of ordination.

“Just as a healing process, I needed to write,” he said. “But then it really occurred to me that this really wasn’t about me; this is actually about God’s faithfulness.”

The book, which took a year to write, blends theological insights with a compelling story. Themes such as the sacraments, Mary and the papacy coincide organically with chapters of Blanski’s life, from his teenage days rebelling against the Twin Cities Baptist megachurch his family attended, to his poetry-infused undergraduate studies at Hillsdale College in Michigan, and finally to the climax of his conversion as an Anglican at Nashotah House Theological Seminary outside Milwaukee.

Along the way, Blanski weaves in the music he was listening to, the books he was reading and the conversations he was having, creating a narrative that engages the reader’s imagination and intellect.

“I wanted to bring people into a story, so they could see (what I was seeing),” he said, adding that his wife, who played a key role in editing, was an invaluable partner throughout the process. “Stories captivate. You can’t convert people if you start with ideas.”

“An Immovable Feast” ends with the Blanskis’ conversion on Easter 2014, but their Catholic story has continued since then.

And they freely admit that it hasn’t always been an easy ride. For one, the couple’s openness to life has meant sacrifices for the sake of new responsibilities.

With children Timothy, 4, and June, 2, and a new business occupying much of their time and energy, the over 1,000 books that line an entire wall of the Blanskis’ home have largely gone untouched since the family moved back to Minnesota in February. The epiphanies of their early years as Catholics have been replaced by the struggle of taking two young children to Mass.

But for Blanski, the end of the honeymoon stage of his new faith is not a cause for alarm, but a sign of stability and deeper conviction in its truth.

“Catholicism is the only faith where you can get a bearing on where you really stand with God,” said Blanski, referring to the church’s teachings, disciplines and sacraments, such as confession. “Catholicism keeps you honest. Unless you start changing Catholicism.”

And it’s this submission to something greater than himself that Blanski finds liberating about the faith, comparing it to Protestant denominations that are “by degrees evermore spiritual and less real, or religious.”

“Only by being received into the Catholic Church can you enter the real cult that Christ established,” he said.

Blanski says his conviction in the church’s divine origins have also helped him weather the sex abuse scandal.

“(The church) isn’t man-made,” he said. “It’s men being put into positions of authority by God, and they’ve been messing it up since the start. It makes you want to weep, but it hasn’t shaken my faith.”

Blanski’s status as a millennial convert, as well as his position leading ministry at a Wisconsin parish for four years after his conversion, has given him some insight into how the Catholic Church can reach young people in the present moment, which was the theme of the Synod of Bishops at the Vatican in October.

“Nothing is as powerful as a man or a woman who is on fire with their faith,” he said, stating that technology-based programs are no replacement for effective ministers. “People follow people.”

Blanski added that the church also needs to stick to the Gospel message, emphasizing the need for repentance and the joy of heaven.

At the same time though, he also recognizes unique challenges in evangelizing today’s generation of young people, from smartphone-induced narcissism to an overly scientific, materialistic view of the world.

“People today, they have no wonder, there’s no awe, whether it’s looking at the night sky or the marriage bed,” he noted. “Everything’s in a petri dish. It’s just sort of sad.”

In a world of disenchantment, the Blanskis said it’s all the more critical for the church to be reverent and beautiful at its core: in the Mass.

Concerned that perhaps they had developed a superficial attachment to incense, altar bells and other things associated with more traditional worship when they became Catholics, they took a step back from those kinds of liturgies — only to find that they were missing something vital.

“We really need our Masses to be reverent and transcendent,” said Brittany, noting how other young families are attracted to more traditional liturgies, and how she’s excited to raise her kids at Holy Family.
“I think it’s such a blessing, and that goes a long way in rekindling that awe and wonder.”