Only risen Christ can bring peace to world at war, pope says at Easter 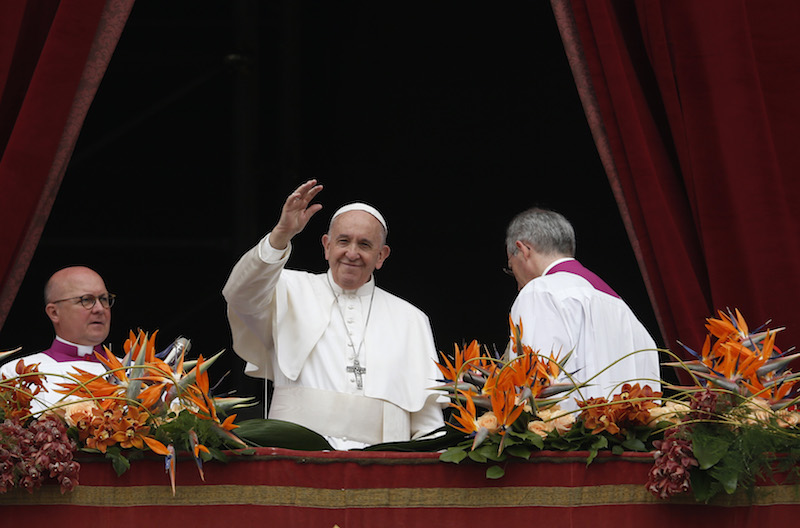 Pope Francis greets the crowd after delivering his Easter message and blessing “urbi et orbi” (to the city and the world) from the central balcony of St. Peter’s Basilica at the Vatican April 21, 2019. (CNS photo | Paul Haring)

VATICAN CITY (CNS) — As the machine of warfare continues to churn out more dangerous weaponry, only the power and joy of Christ’s resurrection can fill hearts with comfort and peace, Pope Francis said before giving his Easter blessing.

“May the one who gives us his peace end the roar of arms — both in areas of conflict and in our cities — and inspire the leaders of nations to work for an end to the arms race and the troubling spread of weaponry, especially in the economically more advanced countries,” the pope said as he prepared April 21 to give his Easter blessing “urbi et orbi” (to the city and the world).

Jesus’ resurrection from the dead is not only the start of a true renewal that “begins from the heart, from the conscience” but also the beginning of a new world “free from the slavery of sin and death” and now open to God’s kingdom of “love, peace and fraternity,” he said.

The pope’s prayer for peace came a few hours after news broke of multiple bombs that exploded in several churches and hotels in Sri Lanka, killing and wounding hundreds in the capital city of Colombo and the neighboring cities of Negombo and Batticaloa.

After giving his blessing, the pope expressed “sadness and pain” at the attack before leading the crowd in several moments of silent prayer for the victims.

“I wish to express my affectionate closeness to the Christian community, struck while it was gathered in prayer, and to all the victims of such cruel violence,” the pope said. “I entrust to the Lord all those who have been tragically lost and I pray for the wounded and all those who suffer because of this tragic event.”

According to the Vatican, an estimated 70,000 pilgrims attended the Easter morning Mass in St. Peter’s Square, where a vast floral arrangement adorning the steps leading to the basilica highlighted the festive atmosphere.

The display of flowers, imported from the Netherlands, featured more than 57,000 individual flowers, plants and trees, including tulips, daffodils, birch trees and more than 1,500 orange and blue strelitzia flowers that accented the joyful celebration of Christ’s resurrection.

Pope Francis did not deliver a homily during the Mass; instead, an announcer invited the crowd to remain in silent prayer for several minutes. As a hushed silence filled the packed square, Pope Francis remained with eyes closed, hands folded and head bowed in prayerful reflection.

Standing on the central balcony of St. Peter’s Basilica after celebrating the morning Mass, the pope prayed that the risen Christ shine his light upon “those experiencing hardship, pain and suffering,” especially in Syria, Yemen, Libya and the Holy Land.

“May the light of Easter illumine all government leaders and peoples in the Middle East, beginning with Israelis and Palestinians, and spur them to alleviate such great suffering and to pursue a future of peace and stability,” he said.

The pope prayed that Jesus would bring peace to the African continent, which he said was “still rife with social tensions, conflicts and at times violent forms of extremism that leave in their wake insecurity, destruction and death, especially in Burkina Faso, Mali, Niger, Nigeria and Cameroon.”

He also prayed for peace in Sudan as well as neighboring South Sudan, whose leaders were recently at the Vatican for a spiritual retreat.

“May a new page open in the history of that country, in which all political, social and religious components actively commit themselves to the pursuit of the common good and the reconciliation of the nation,” the pope said.

Turning his attention toward Latin America, Pope Francis prayed for peace in Nicaragua so that a “negotiated solution” would bring peace to its people.

He also remembered the suffering people of Venezuela who “lack the minimal conditions for leading a dignified and secure life due to a crisis that endures and worsens.”

The pope prayed that political leaders in the country would put an “end to social injustices, abuses and acts of violence” while taking concrete steps “to heal divisions and offer the population the help they need.”

Before delivering his blessing, Pope Francis urged Christians to be renewed by the living Christ who “is hope and youth for each of us and for the entire world.”

“May the risen Christ, who flung open the doors of the tomb, open our hearts to the needs of the disadvantaged, the vulnerable, the poor, the unemployed, the marginalized, and all those who knock at our door in search of bread, refuge, and the recognition of their dignity,” he said.