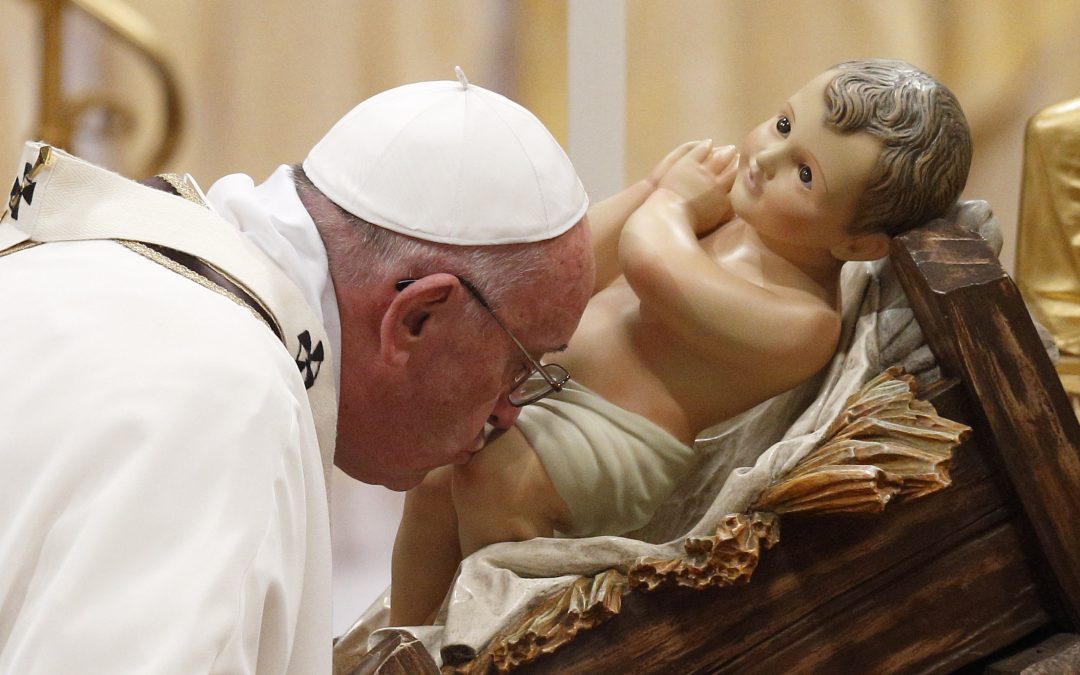 VATICAN CITY (CNS) —- Christmas is a reminder that through the birth of Christ, hope and peace are possible and that only through his grace can humanity find peaceful solutions to the world’s most difficult problems, Pope Francis said.

Heightened security around St. Peter’s Square did little to dampen the spirits of an estimated 50,000 people attending the pope’s solemn Christmas blessing “urbi et orbi” (to the city and the world). Many in the crowd dressed festively and applauded the music of the Vatican’s marching band.

However, police and anti-terrorism task forces were a visible sign of a world shaken by violence and extremism; conflicts that have not even spared the birthplace of Jesus Christ. The pope prayed that Israelis and Palestinians would reach a peaceful agreement that would end the “conflict which has long set them at odds, with grave repercussions for the entire region.”

The pope also prayed that recently approved agreements would bring a quick end to the wars afflicting Syria and Libya, two countries ravaged by war for several years. He also prayed that the international community would find ways to end atrocities in Iraq, Yemen, Congo, Burundi, South Sudan and Ukraine.

Victims of terrorism were also in the pope’s thoughts and prayers as he remembered the victims of the Russian airliner bombed in Egyptian airspace and terrorist attacks in Beirut and Paris; Bamako, Mali and Tunis, Tunisia.

Christians persecuted for their faith were remembered as the pope prayed that “the Child Jesus grant consolation and strength” to those suffering.

Recalling the thousands of refugees and migrants fleeing poverty and war, Pope Francis compared the lack of respect for their dignity to the situation of Christ who was born into the world suffering “cold, poverty and rejection.”

“May our closeness today be felt by those who are most vulnerable, especially child soldiers, women who suffer violence, and the victims of human trafficking and the drug trade,” he said.

As the church celebrates the Holy Year of Mercy, the pope said mercy is the “most precious gift which God gives us” and that Christians “are called to discover that tender love of our heavenly Father for each of us.”

The bells of St. Peter’s Basilica pealed at midday, just as they did late Dec. 24 when thousands packed the church for Christmas Mass. Hundreds of people who could not find room in the basilica braved the cold weather and watched on giant screens from St. Peter’s Square.

With his voice noticeably hoarse from a bout of flu, the pope said in his homily that the prophetic words of Isaiah are those of a fulfilled promise of joy and gladness that are “a sure sign that the message contained in the mystery of this night is truly from God.”

Doubt and indifference, he stressed, should be left to skeptics who “by looking to reason alone, never find the truth.”

“There is no room for the indifference which reigns in the hearts of those unable to love for fear of losing something,” he said. “All sadness has been banished, for the Child Jesus brings true comfort to every heart.”
The birth of Jesus, he continued, is a call for all Christians to “put away all fear and dread” and to follow the path that leads to Christ “who has been ‘born to us,’ he was ‘given to us’ as the prophet Isaiah proclaims.”

The coming of Christ into the world, the pope said, shows what is truly essential in life. Despite his birth into the “nothingness” of poverty, Jesus shows men and women who are simple of heart the true path of “authentic liberation and perennial redemption” while giving them strength to reject “godless ways and the richness of the world.”

“In a society so often intoxicated by consumerism and hedonism, wealth and extravagance, appearances and narcissism, this Child calls us to act soberly, in other words, in a way that is simple, balanced, consistent, capable of seeing and doing what is a essential,” he said.

Christians, the pope said, are called to cultivate a sense of justice, discernment and doing God’s will in a world that is often “merciless to the sinner and lenient to the sin.”

As a choral rendition of “Silent Night” echoed through the basilica during the distribution of Communion, many attending the Mass were visibly moved. A nun looking reverently toward the main altar shed a single tear while smiling; gazing with the eyes that Pope Francis said in his homily all Christians are called to look upon the Baby Jesus.

“Like the shepherds of Bethlehem, may we too, with eyes full of amazement and wonder, gaze upon the Child Jesus, the Son of God. And in his presence may our hearts burst forth in prayer: ‘Show us, Lord, your mercy, and grant us your salvation,'” the pope said.