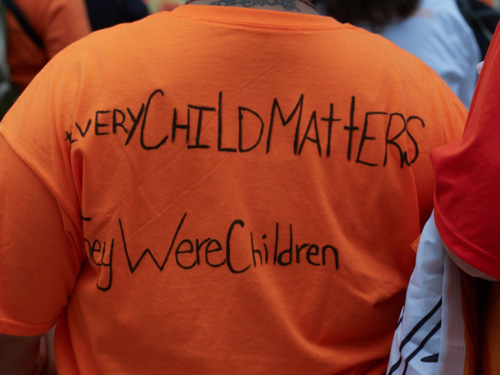 Many participants in July 31’s “Every Child Matters: Walk for Justice for Our Ancestors,” organized by members of the Onondaga Nation, wore orange shirts declaring They Were Children and Every Child Matters. Similar marches and memorials have taken place in many U.S. and Canadian communities since the discovery of more than 1,000 unmarked graves near former Catholic-run residential schools in Canada. (Sun photo | Chuck Wainwright) 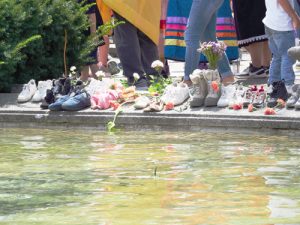 March participants placed children’s shoes, toys, and flowers at the base of the Columbus Monument. (Sun photo | Chuck Wainwright)

More than 100 people walked about 6 miles from the Onondaga Nation to Columbus Circle in downtown Syracuse July 31 to honor victims and survivors of residential schools for Indigenous children. Many marchers, including Onondaga leaders, wore orange shirts declaring They Were Children and Every Child Matters. Participants also carried signs, flowers, stuffed animals, and children’s shoes, which they placed around the base of the Columbus Monument across from the Cathedral of the Immaculate Conception.

A child-sized wooden coffin, marked with painted handprints and filled with orange flowers, stood in front of the speaker’s platform. Nearby, a sign marked E. Onondaga Street, a reminder that the city of Syracuse and the Cathedral stand on the ancestral lands of the Onondaga Nation.

“I have personally been suffering great sorrow for many years, hearing these tales that were told by the people that are survivors. Very sad, heart-wrenching stories,” said Jeanne Shenandoah, a member of the Onondaga Nation, at the rally following the walk.

“… really the only thing I can do, in one way, is to stand with you in your tears and in your sorrow,” Bishop Douglas J. Lucia said at the rally. He was among several speakers who denounced the abuse and generations-long trauma church-run residential schools inflicted. 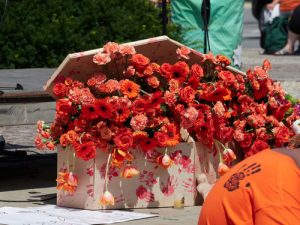 “Certainly, to see the coffin before me, with the bloodstained hands, reminds us of a history that my own church has been part of,” he said. “As a bishop, I certainly deplore, decry, and certainly weep and want to apologize for what has been done.”

Members of the Onondaga Nation organized “Every Child Matters: Walk for Justice for Our Ancestors’’ following recent discoveries of more than 1,000 unmarked graves near former Catholic-run residential schools for Indigenous children in Canada. Indigenous peoples have participated in similar events across the U.S. and Canada.

More than 350 government-funded, and often church-run, residential boarding schools operated in the U.S. from 1869 to the 1960s, according to the National Native American Boarding School Healing Coalition. The schools aimed “to culturally assimilate Indigenous children by forcibly relocating them from their families and communities to distant residential facilities where their American Indian, Alaska Native, and Native Hawaiian identities, languages, and beliefs were to be forcibly suppressed,” according to a U.S. Department of the Interior press release. “For over 150 years, hundreds of thousands of Indigenous children were taken from their communities.”

The U.S. bishops’ conference last month said it will “look for ways to be of assistance” in a federal investigation of the history of U.S. boarding schools for Indigenous children. 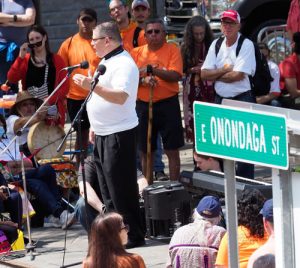 Speaker Virgil Brave Rock, a member of the Blackfeet Nation who now resides on the Onondaga Nation, described the abuse he experienced and witnessed during his years at a residential school, the Catholic-run St. Mary’s Residential School on the Blood Reserve in Alberta, Canada, according to a syracuse.com profile.

“We as children suffered abuses that took me many, many years to face,” he said during the rally. “During those years, if we were caught speaking our language, we had to put industrial soap in our mouths until our tongues blistered.” For infractions, “we were punished by whippings,” he said.

Brave Rock acknowledged other survivors, saying, “I know the pain that is left and the scars that are left behind.”

Bishop Lucia recently called on the Vatican and the U.S. Catholic Church to acknowledge the damage 15th-century Vatican documents — whose directives are collectively known as the Doctrine of Discovery — inflicted on Indigenous peoples. During a U.S. Conference of Catholic Bishops discussion in June about a new proposed statement on Native American and Alaskan Native ministry and the discovery of unmarked graves at residential schools, he urged the body to address the doctrine. 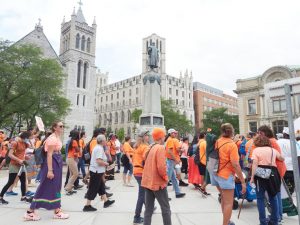 Participants in “Every Child Matters: Walk for Justice for Our Ancestors,” organized by members of the Onondaga Nation, arrive at Columbus Circle in Syracuse July 31. The city of Syracuse plans to relocate the bronze statue of Christopher Columbus that stands across from the Cathedral of the Immaculate Conception following debate about how to honor the heritage of both the Italian-American community, which financed the monument in the 1920s and ‘30s, and the Onondaga Nation. (Sun photo | Chuck Wainwright)

He has called for church leaders “to re-examine” the documents that assert European Christianity’s superiority and power over other lands. Those documents took away Indigenous people’s “right to ownership. Literally. It was subjugating them. They became second-class citizens,” he told the Sun last month.

The bishop ended his remarks at the rally with words of contrition: “I sincerely do apologize for anything that violates the teaching of Jesus Christ, who taught nothing but love, nothing but respect and care for those around him.”