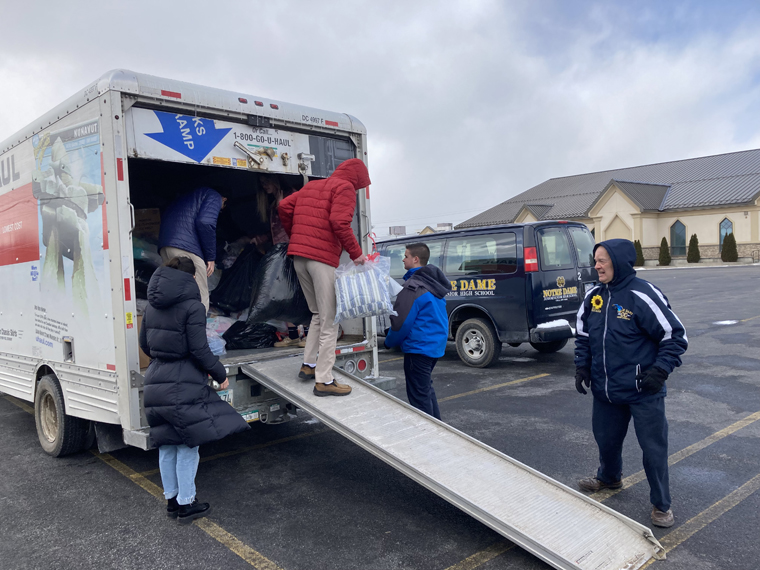 Utica — During their midwinter planning for the Lenten season, Notre Dame Jr./Sr. High School campus minister Robert “Bob” McQueen and theology teacher Valerie “Val” Elacqua were thinking about Easter. “We were looking for a Lenten “cause.” We were thinking, What can we GIVE for Lent rather than what we would GIVE UP?”

Bishop Douglas J. Lucia, in his coinciding YouTube Lenten message, suggested that Catholics of the Diocese of Syracuse consider that very path. He said:

“I don’t worry too much about what food I give up. I think more about giving up some time surfing the net or talking on the phone or watching TV so I can give that time to God, to our charitable works and to our neighbors. This is especially important in the world we live in today. It’s a world in which we find violence and where we can be peacemakers. It’s a great time to make time for others.

“How do you and I show that compassionate face of God to those we meet along the way in our journey?”

McQueen said, “One student, Logan Shedd, came into our office and said he’d been watching news coverage of a member at a North Utica/Schuyler Pentecostal church who had been seeking ‘goods donations’ as well as financial help for an interstate collection being flown to Poland and then on to Ukraine. We contacted that individual, Viktoriya Runkevich, at the Slavic Pentecostal Church and House of Prayer in Schuyler and told her we were interested in donating. She accepted an invitation to meet with us here and got back to us with a list of the most needed items: blankets, hats, shoes, warm jackets, diapers, vitamins, coloring books, scarves and more.

McQueen continued, “The Student Council here approved the proposal, setting a two-week collection period for the donation drive. Everyone agreed that the project title would be ‘Operation Help Ukraine at Notre Dame.’”

“An email was sent out to parents, and the entire Notre Dame community, both at the elementary school and the high school, responded magnificently,” according to McQueen. The high school chapel was overflowing with goods and the elementary drive, spearheaded by Principal Mrs. Mary Rossi, generated a corresponding bounty.”

The collection drive ended Monday at both schools.

The goods were loaded into a U-Haul truck and delivered to the Rt. 5 Schuyler location of the cooperating Pentecostal church. The trucking company owned by Ivan Runkevich will take the combined church and Notre Dame donations to Grace Evangelical Church in Columbus, Ohio, where they, along with donations from other Central New York areas, will be packed onto the special fight to Warsaw, Poland, and then on to Ukraine and border areas.

At Columbus, the donation-expediting is being handled by yet another Runkevich family member, a cousin who is a deacon at the church. Viktoriya explained that she and her relatives are Ukrainian born and they have many family members still there. “When the war started, my brother and I decided that we would begin a donation and fundraising drive. With his help, we were able to organize and coordinate the international shipment after getting everything to Columbus, Ohio.”

Viktoriya added that the plane’s fuel alone costs $30,000, and she is seeking monetary donations to help cover costs. “Our family donated $5,000, and others are being very generous. There will be supplies going by ship as well. Additional cash donations of any amount can be made through the Grace Evangelical Church website, https://www.visitgec.org.”

The site says $225,000 has been received from 500 donors; with 15 European distribution partners, nine sea-air shipments are already completed.

Viktoriya praised the Notre Dame donations project. “They brought us so many really good things, and we thank them for being a part of all this,” she said.

The U-Haul returned, Notre Dame’s “Team Ukraine” drove the final miles back to home base in the Notre Dame van. During that run, McQueen heard one donation-team member say, “I feel really good about what we just did.”

After all, Notre Dame had just shown “that compassionate face of God” to Ukraine.