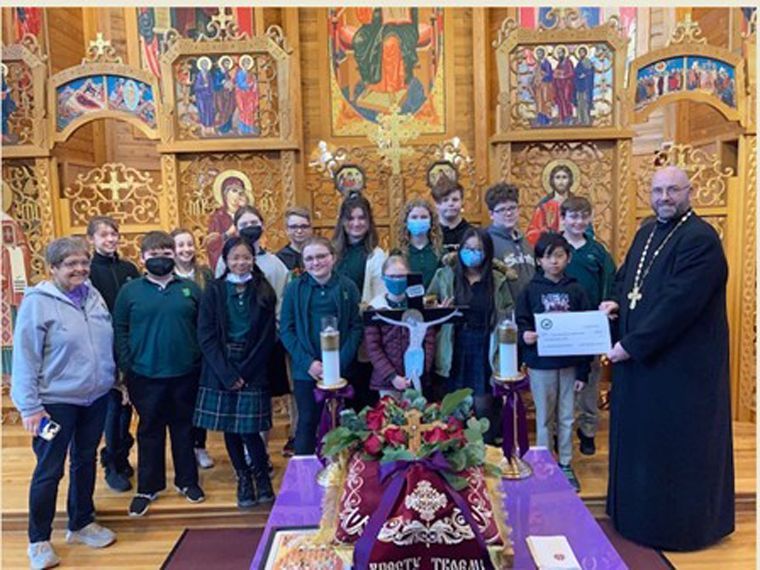 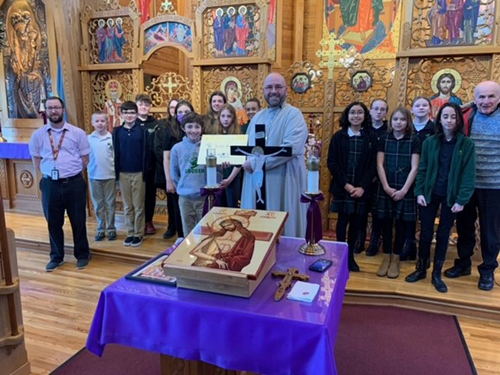 Immediately after hearing about the attack on Ukraine, the Catholic Schools of Broome County began planning for ways to send support to the Ukrainian people. Each school set up dress-down days to raise funds and began collecting supplies to send to Ukraine. At St. John the Evangelist (SJE), the entire school participated in raising funds; some of the elementary students even emptied their piggy banks in an outpouring of care for the people of Ukraine. The sixth-grade students along with their teacher, Mr. Balles, Principal Abrams and Monsignor Michael Meagher visited Sacred Heart Ukrainian Catholic Church in Johnson City to deliver the funds they raised to Pastor Father Ted Czabala.

St. James School in Johnson City also raised funds for Ukraine and the sixth-grade students along with their teacher, Miss Barnes, and Principal Patrick Monachino delivered their check to Pastor Czabala as well. St. James students also listened to prayers spoken in Ukrainian. Kindergarten teacher Larissa Rabarsky and administrative assistant Irene Synyshyn recited the Hail Mary and Our Father in Ukrainian while dressed in their traditional Ukrainian blouses.  Both Mrs. Rabarsky and Mrs. Synyshyn are members of Sacred Heart Ukrainian Catholic Church. St. James is now in the process of setting up a drive to collect supplies as well.

All Saints Elementary School in Endicott had a dress-down day and wore yellow and blue for Ukraine. They prayed for peace, learned more about the country of Ukraine and were able to raise funds that were also given to Sacred Heart Ukrainian Catholic Church. They also had a supply drive for Ukraine in coordination with the First Ukrainian Pentecostal Church in Binghamton to be delivered to the Ukrainian people in need.

Seton Catholic Central (SCC) also raised funds for Ukraine. The Respect Life Club held a dress-down day with all proceeds given to Sacred Heart Ukrainian Catholic Church to assist the refugee efforts. All students dressed in the blue and gold Ukrainian colors. SCC is also planning a medical-supply drive for Ukraine.

Each one of the Catholic schools in Broome County has been able to support the struggling people in Ukraine. Giving to those in need is a common practice for students in the Catholic schools and one that is instilled in them throughout their spiritual and educational experience. This practice teaches students to step outside of themselves and focus on the needs of others.