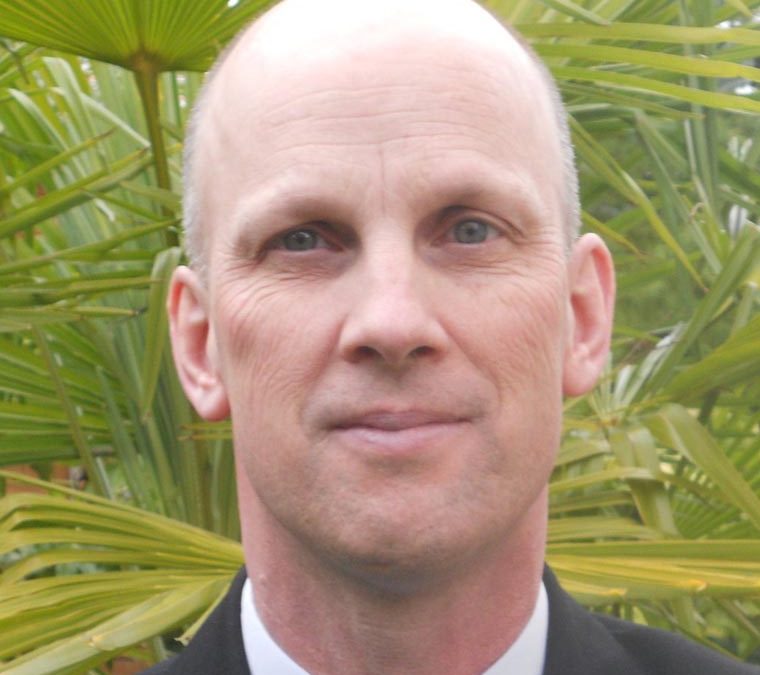 PORTLAND, Ore. (CNS) — On a crowded Portland commuter train May 26, a selfless Catholic father of four stepped forward to calm a tense situation. He was that kind of guy.

Rick Best defended two women being accosted by a passenger yelling hate speech about Muslims and other groups. Best, a 53-year-old member of Christ the King Parish in Milwaukie, Oregon, would die for his noble deed.

In less than a minute, he and another defender were slain, slashed in the neck in front of horrified onlookers. A third man survived the knife attack.

Best’s funeral Mass is set for June 5 at Christ the King Church.

The accused killer, 35-year-old Jeremy Christian, had been on a racially charged rampage. With a history of police run-ins going back 15 years at least, he was caught on camera in April, draped in an American flag and repeatedly yelling bigoted epithets during a demonstration in Portland.

On his Facebook page, he posted a photo of himself performing the Nazi salute and declared himself a white supremacist.

The day before the killings, Christian hurled a bottle at a black woman at another rail station.

On the unseasonably warm afternoon of May 26, one of the young women who became Christian’s focus on the packed train was wearing a hijab; the other was black.

When the bloodied train stopped at the next station, Christian escaped, but police captured him soon after. He remained in custody in Multnomah County Jail, indicted on two counts of aggravated murder, one count of attempted murder, two counts of intimidation and one count of being a felon in possession of a restricted weapon.

Best was pronounced dead at the scene. Taliesin Myrddin Namkai Meche, a 23-year-old graduate of Reed College in Portland, died later at the hospital. Injured in the attack and recovering was Micah David-Cole Fletcher, a 21-year-old student at Portland State University.

A veteran who served in combat in Iraq and Afghanistan during a 23-year career in the Army, he had worked as a technician for the city of Portland’s Bureau of Development Services since 2015.

His supervisor, Kareen Perkins, told KGW-TV: “He was always the first person you would go to for help. I’ve talked to most of his co-workers today, and several of them said it’s just like Rick to step in and help somebody out.”

Best and his wife, who is from Vietnam, met at Portland Community College. He retired from the Army as a platoon sergeant in 2012. Living in the suburban town of Happy Valley, he decided the local government needed refreshing and in 2014 ran unsuccessfully for the Clackamas County commission, refusing to accept campaign donations.

In a prepared statement, Portland Archbishop Alexander K. Sample sought to comfort a city shocked by the brutal slayings. The metropolitan area of more than 1 million averages about 20 murders per year.

“Pray for those who may now feel unsafe in moving freely about a city that truly welcomes people of all cultures, faith traditions and walks of life,” Archbishop Sample said.

“Pray for those whose hearts and minds may be hardened to the love of God and act out in such violent and hateful ways.”

He said “profound gratitude is owed to those who bravely stepped forward to protect the young women who were being vehemently harassed.”

During a Memorial Day homily at a cemetery not far from the Best home, Archbishop Sample told hundreds of worshippers May 29 that Best learned in the Army what it means to put one’s life on the line for others.

Christ the King Parish is in shock, but has mobilized to support the Bests.

“This family is so faith filled,” Deacon Jim Pittman, who served for years at Christ the King, told the Catholic Sentinel, Portland’s archdiocesan newspaper. The Bests came to Sunday morning Mass May 28, just 40 hours after the killings.

Deacon Pittman has been meeting with the family. “I told the kids, ‘Your dad died in the way Christ told us to,’” he said. Eric, the oldest, told Deacon Pittman that he is not yet ready to forgive, but does not feel hate.

Deacon Pittman told Eric and the other children it is all right to cry. “That’s what our dad always told us,” responded Eric, who was taking a lead in making arrangements for his father’s funeral.

“They are just the nicest family ever,” said Evans Brackenbrough, a La Salle Prep student who attends Christ the King youth group with two of the Best children. “There is nothing bad in any of the kids.”

At the light rail station, a massive memorial has sprung up. Flowers, candles and chalked prayers cover the area. Citizens stand and weep, even if they did not know anyone involved. One visitor to the vigil site, Tami Soprani of St. Patrick Parish in Portland, tried to explain the feeling.

“You see someone stand up for what we all believe, and that is very powerful, very emotional,” Soprani said.