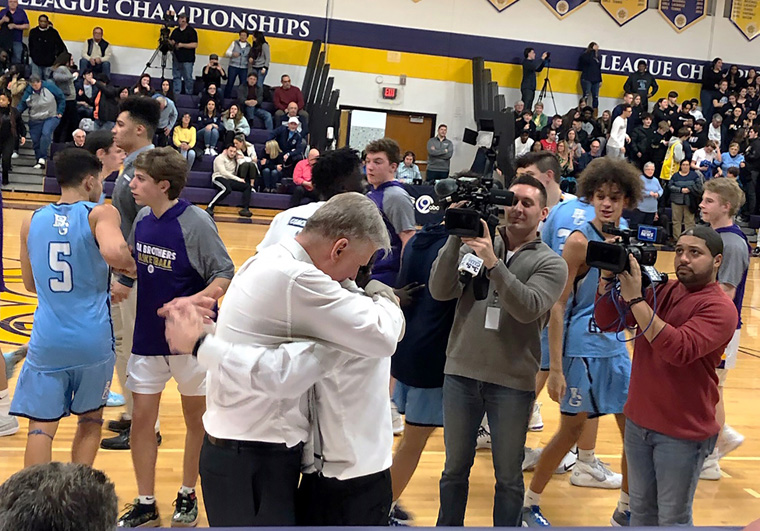 A wall sign at Bishop Grimes Jr./Sr. High School reflects a line from Galatians: “Let us not grow tired of doing good.”

Four decades piling up wins is not tiring to Grimes varsity boys basketball Coach Bob McKenney — not when he is still glowing from his 600th career victory. The 58-44 win came Jan. 14 against his good friend Coach Buddy Wleklinski of Christian Brothers Academy.

Coach Wleklinski had achieved his 500th career win on Jan. 11 — a 67-47 victory over Solvay. The game ball sits in his office at CBA. Other keepsakes include photos of him with basketball legends Mike Krzyzewski, Bill Russell, and John Wooden.

“I think Pat Donnelly’s the one that coined us as dinosaurs,” Coach McKenney said, quoting the esteemed former boys basketball coach at Bishop Ludden. “You’re not going to see as many dinosaurs in coaching anymore because it’s gotten a lot harder,” with specialization and AAU coaches and indoor coaches and strength coaches: “Everybody has a piece of everybody.”

“A lot of times we’re the ones that have to tell the kids the truth,” he added. “Everybody else is telling them what they want to hear …, but we have to tell them the truth about whether or not they’re a scholarship player” and whether they are going to get a lot of playing time.

Like Coach McKenney, Coach Wleklinski does not grow tired of winning. A lot of former CBA players were in the stands for Coach Wleklinski’s 500th victory, along with a whole bunch of other people, and they brought signs to the gym too. Asked about the tension compared to the fun of the big game against Solvay, Coach Wleklinski said:

“I would hope our kids just went out and played and did the best that they could, like we always ask them to.” He had not mentioned the impending milestone to the team in the week leading up to the big win. 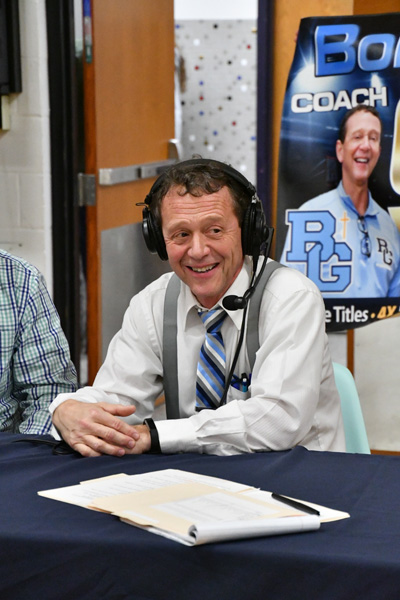 Grimes Coach Bob McKenney says: “It’s been a blessing for me to be here.” (Photo courtesy Rhonda Hawes)

After the victory, the former players came down and offered their best wishes, and there was some cake in the cafeteria and the presentation of a certificate and the game ball to Coach Wleklinski. A lot of former players have sent him emails, texts, and cards, and they have also called him.

“I’m very fortunate,” he said. “This is a good place; I’ve dealt with so many great people, and they’ve all been very kind to me, so I really am … just really lucky.”

He also credited CBA Assistant Coach Ed Leone, who has been with him on the bench for almost 25 years. Both coaches played basketball for CBA; Coach Wleklinski graduated in 1975 and  Assistant Coach Leone in ’74.

Also on the Brothers’ varsity bench for every game is CBA JV Coach Dave Marshall, who previously played for Coach Wleklinski, who is also the longtime director of athletics for the Brothers.

Grimes Coach McKenney switched from fulltime teaching when he took over as the Cobras’ director of athletics in November 2019; he now teaches half a day — physical education and sports marketing.

Known for wearing suspenders while coaching, he is in his fifth year as the Cobras’ varsity coach. Including JV decades ago, he has coached for 40 years. That includes 36 years at the varsity level, with 19 of those years as the boys varsity basketball coach at Jamesville-DeWitt. He was coaching J-D when he achieved his 500th win several years ago; it came against his great pal Coach John Clancy of Chittenango.

Coach McKenney won five state Class A championships at J-D. In his first season at Grimes, he coached his team to the sectional title and advanced to the state tournament.

His admirers include his Grimes colleague Coach John Cifonelli, the head coach of the Lady Cobras basketball team.

“I think it speaks volumes for him as a coach and as a person,” Coach Cifonelli said of his buddy’s 600th win, “because you can’t stick around and have the opportunity to win 600 games if you’re not the type of person that Coach Mac is.”

Like Coach Wleklinski at CBA, Coach McKenney credited his assistants. Charlie Falgiatano, for example, is Grimes’ JV coach and has served as Coach McKenney’s varsity assistant since 2000. They were together at J-D, and Assistant Coach Falgiatano’s son Anthony attended those games when he was a baby; he now plays varsity for the Cobras.

“Great, great, great human being,” which is the most important thing, Coach McKenney said of Anthony, who won a Bishop James Moynihan Pro-Vita Award (scholarship) last year for his pro-life essay.

Very impressed that Coach Wleklinski’s whole career has been at CBA, Coach McKenney thinks back to his late father, who spent his whole career at one school where he taught, coached, and became an administrator and the superintendent in Canton, N.Y. When he retired, the district named a school after him: JM McKenney Middle School.

Coach McKenney played basketball for St. Lawrence University. He was injured in his junior year and even though he recovered, he declined to play in his senior year; instead, he accepted a coaching job and got a very good start on his resume.

He played in a men’s 40-and-over basketball league until he was 57, but now he’s got two wrecked shoulders, so basketball battles must be fought only as a coach.

“Every time we play CBA or Ludden,” he said, “it’s just a different atmosphere. It’s a packed gym. It wasn’t packed [on Jan. 14 at CBA] because of my 600th win,” it was packed because it was Bishop Grimes and CBA. 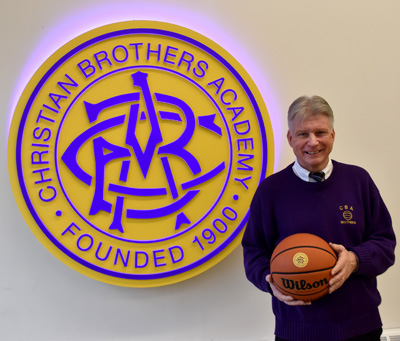 CBA Coach Buddy Wleklinski holds the game ball from his 500th career victory.
He says: “Our players come in, they give you the energy. … When you go into practice, you want to do your best for them.” (Sun photo | Tom Maguire)

On Jan. 14, the CBA gym was packed and loud for the game against Grimes. It was a classic confrontation of an up-tempo team, Grimes, which has several brilliant soccer players who are used to constant running, and a team that prefers patterns and less all-out sprinting, CBA.

Grimes led by one point after one quarter and by seven points at the half. Grimes outscored CBA 12-11 in the third quarter and then 19-13 in the fourth to win by 14 points. Top scorers for Grimes were Ian Denton (18 points), AJ Burnett (17), and Joe Wike (15).

At one point in the second half, Coach McKenney said, “I could hear our student section starting to chant a little bit: 600.” It started to hit him that, wow, it looked as if it was going to happen.

“But when we play anybody,” he said, “especially a good team like CBA or anybody that Buddy coaches, until that bell goes off to end the game I’m still nervous that they’re comin’ back.”

“We had a really, really large crowd,” he added, “so I think the kids felt really supported by the Bishop Grimes school community — the student section and the parents and the teachers. …

“That helps you relax a little bit, that helps keep your energy up, it helps you get through a bad stretch in the game; so it was interesting to go in their gym and see so many Grimes fans there.”

“I think it’s an amazing achievement,” Grimes’ Anthony Falgiatano said of his coach’s No. 600. “It’s something that he’s worked for for a very long time, and he really enjoyed doing it with this group because he really likes us all. We have a special bond with him. We started at Grimes together in the same year.”

Before the game, Anthony said, there was a little extra nervousness: “We gotta get Coach his 600th, yeah. But once we started playing, we just kept our head down and plowed through, and we beat CBA.”

Teammate Jack Gutchess, who plays soccer in addition to basketball, said: “We were runnin’ ’em up and down the court; they couldn’t keep up with us; they really wanted to slow the game down, and we were able to pick up the pace and we were in great shape.”

Gutchess said Coach Mac’s No. 600 was “a great moment and something I’ll remember the rest of my life; and hopefully this isn’t the only great achievement we have this year.”

Cobras teammate Deng Mawien, another soccer star, said: “I think Coach Mac is a great guy, and I’m happy for his 600th win.”

Asked when he knew Grimes was going to win, Mawien said: “I knew it when we reached the fourth quarter … and everybody was making 3s. So I realized: Hey, it’s done.” He told somebody to get him his 600th-win shirt, and he put it on.

Another elite soccer veteran on Grimes’ basketball squad, Byam Mugushu, said the CBA gym was “all filled up. We had the [TV] news there, the game was live.”

He said Coach McKenney has “that mindset of knowing what to do — beat the other team. … We’re really proud that we got it for him.”

Mugushu added that he is proud of CBA’s Coach Wleklinski for having achieved win No. 500. Mugushu’s teammate Mawien agreed that both coaches are deserving of their milestones.

When the game ended, both head coaches shared a hug and laughter.

Coach Wleklinski said he told Coach Mac: “‘Happy for ya that you got your 600, but just wish it didn’t happen here.’

“But you know, Bobby and I are friends, and sometimes people at large … don’t realize that it’s still a game. Bob and I are friends, we’ve been friends for a long time. The players are friends. … Rivalries are there because of respect. You shake hands, you hug.”

Always worth cheering for

If players do something wrong on the court, he said, “cheer them on, they’re good kids.”

“There’s a mutual respect as coaches that’s always been there,” Coach Mac said. “We have had so many classic battles in the 20-plus years I’ve been in Syracuse and the rivalry seems to follow me.

“He stays there [at CBA], so it follows me around. But in the middle of all that we’ve become good friends. …

“We laughed, and we hugged, we laughed and he stepped out of the way; he was a class act all the way, he let us kind of have the night in the gym and the [600th-win