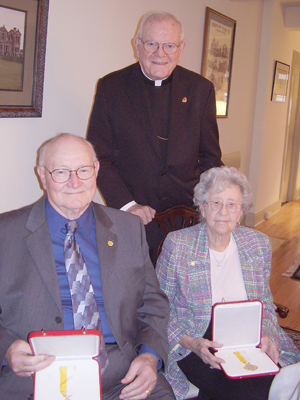 Four lay persons of the Diocese of Syracuse recently received the Holy Cross Pro Ecclesia et Pontifice, the highest medal that can be awarded to the laity from the pope. Dan and Kathleen Mezzalingua, Art Luke and Dorothy Griffin were each awarded the cross medal which hangs from yellow ribbon. The process to bestow the honors began with now-retired Bishop James Moynihan a couple of years ago. He presented the honors at two luncheons held at his residence this past week. All four were recognized for their distinguished service to the church.

Dan and Kathleen Mezzalingua are involved in the community and in the church. They are parishioners of both Holy Cross in DeWitt and St. Ann’s in Manlius. Kathleen is a  member of the Order of Malta and she and her husband are members of the Holy Sepulchre. They have served as members of parish councils, trustees of their parish and helped with the implementation of the Heritage Campaign. Dan is a trustee of Syracuse University, and of Manlius Pebble Hill School, and a member of the board of directors of St. Bonaventure University. He is member of the Witherspoon Institute and the James Madison Program, both at Princeton University. The Princeton organizations deal with Catholic issues on faith and morals.

Kathleen just finished a four-year term with Friends of the Central Library where she worked on the Rosamond Gifford Lecture Series. She is a Hospitaller serving as a liaison between the Order of Malta here and Washington, D.C. Kathleen has made several trips to Lourdes as part of her work with the Order of Malta. The group takes care of the infirm pilgrims that travel to Lourdes serving them for a week each April. The experience is one that Kathleen treasures and describes as “beautiful.” She heads up her late daughter’s endeavor, the Saint Agatha Foundation.

The Mezzalinguas have five surviving children and nine grandchildren. Their third child, Laurie, died of breast cancer this past summer at the age of 41. Kathleen was able to share the Lourdes experience with her daughter, once when Laurie served as a volunteer and then again when Laurie was a “malade” or one who requires help on the piligrimage. Watching Laurie face challenges with faith and courage has been the latest factor to shape the lives of the couple.

illness,” Kathleen said. “Laurie battled breast cancer for 12 years and she thanked God every day for her blessings. Our daughter taught us a lot about giving.”

“My faith grew from my Catholic education and my parents,” Kathleen said. “When we [classmates] get together to visit, we all realize that we’re all pro-life and aware of issues involving the church and we know it stems from our Catholic education.”

One project the Mezzalinguas are involved in is a Catholic school they built in St. Kitts in the British West Indies. They have a factory there and when the local school closed, their daughter came up with idea to build the school, now named Immaculate Conception School.

“It’s a K through 11 school because it follows the English school system,” Dan explained. “We have added eight buildings so that it is sort of a compound. The school is really a commitment of our whole family.”

Their own commitment to the Catholic Church is what led to their awards.

“It was a total shock,” Kathleen said. “It’s a beautiful honor.”

The couple feels a responsibility to give back to the church and community because they have received so many blessings.

“We’ve been very, very fortunate,” Dan said. “It is important that we give back using our gifts to help other people.”

Art Luke was “volunteered” to help out with the parish council at Our Lady of Counsel in Warners by his late wife back in 1984. He’s been working with the parish ever since, and in his position as administrator he helped to guide the parish through some very dark days.

“It was quite a difficult time,” Luke said. In 1985, the parish learned it would eventually be closed. “I’ve sat in on a lot of the reconfiguration committees, so I knew it was coming,” Luke said. “It was in the cards that it had to be done.”

But on Feb. 29, 1992 there was a fire at the church leaving approximately $185,000 in damage. “It destroyed the altar and the choir loft and we had to redo the whole church,” Luke said.

Late Bishop Joseph O’Keefe visited the church the next day and told Luke that he would keep the church open for a while.

When Msgr. Joseph Champlin retired from the Cathedral, he went to Our Lady of Good Counsel. “After he realized he was retired he really started to enjoy himself here,” Luke said. “I think he really started to feel like we were his family and we really felt like he was a part of our family, too. And as a matter of fact I know a lot of people still feel that way today.”

“I would get priests to come in, and the priests would do the sacraments, but the day-to-day operation of the church I took over with,” Luke said.

But he said one reason he was able to help the parish through this time was because of the cooperation of the priests and parishioners he was working with. “The people were more than wonderful,” he said. “They really accepted me as a lay minister.”

On June 29, 2008, Our Lady of Good Counsel merged with St. Joseph’s in Camillus. Two months before the merging, Luke had an opportunity to give a speech to the parishioners. “They all stuck with me right to the bitter end, and we had a nice celebration,” he said. Bishop Moynihan came to celebrate the final Mass, and Luke said it was like having the opportunity to have a funeral for the parish.

“The people didn’t really accept it but they did it with love and graciousness. There was no animosity toward the church,” Luke said.

Now, Luke helps with the books at St. Thomas Moore Church and he floats between about six or seven parishes, usually attending two Masses a weekend. “I’m roving at this point but I’m looking to join one,” he said.

When he learned he was being awarded with the medal, he said he was stunned. “Being recognized by the pope is something I’ve never even heard of,” he said. He’s shown the medal to some of the folks that have heard about it but, he said, “I really don’t want to be a bragger or anything. I’m really just a servant of the people and I want to stay like that.”

“Most of them have been anonymously and I’d like it to stay that way,” Griffin said.

“I’m a school teacher by trade and I’ve never gotten over it,” Griffin said. “I loved the kids.”

She said she was thrilled to receive the award, which came as a total surprise to her.</ p>

“Once somebody brought me back a card from the Vatican,” she said, looking at the medal, “but I never expected this.”