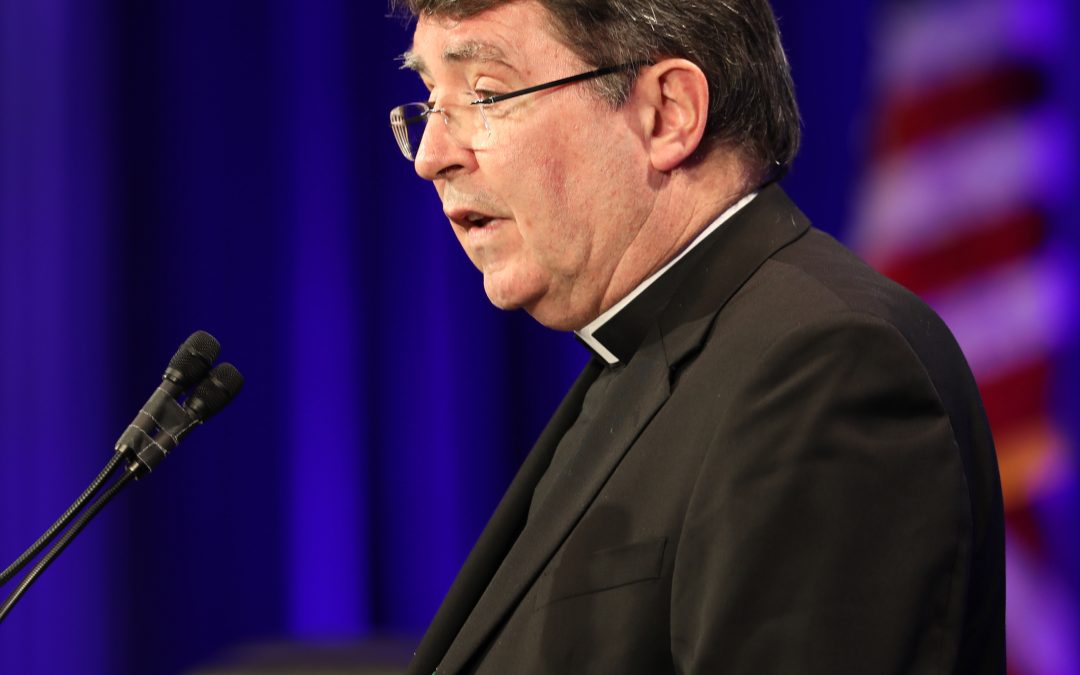 By Carol Zimmermann | Catholic News Service
BALTIMORE (CNS) — At the start of the annual fall meeting of the U.S. bishops in Baltimore, Archbishop Christophe Pierre encouraged the U.S. bishops to work hard together to restore trust and bring about church reform amid the current crisis in the church.

The nuncio’s Nov. 12 address — part pep talk, mixed with encouragement and advice — urged the nation’s church leaders to face the issue of clergy sexual abuse straight on, not to run from the challenges that confront them but “face them realistically and courageously.”

He also said that as they face blame, they need to lead the way to reform and healing.

“The responsibility, as bishops, of this Catholic Church is ours, to live with, to suffer with and to exercise properly,” he said to the group, who had just heard moments before that they would not be voting on two proposals in their response to the clergy sex abuse crisis, at the Vatican’s urging.

The archbishop, who met privately with Pope Francis just two days before addressing the U.S. bishops, noted at the start of his 26-minute talk that the “events of this past year, which we have lived and continue to experience, have been both challenging and sobering.”

“We must accept our responsibility as spiritual fathers,” he stressed and continued to reiterate.

He said the policies in place to protect children and young people in the church, adopted during the bishops’ 2002 gathering after the abuse crisis at that time, are not enough.

“There is always more to do, and we bishops must not be afraid to get our hands dirty in doing that work,” he said, urging them to collaborate with the laity but to face the current crisis both individually and as a group first and foremost.

He said many bishops have done good work already but still “we must reaffirm vigorously that one case of abuse is one too many. Therefore, it is necessary for the entire people of God to remain vigilant.”

The nuncio did not offer clear steps forward but spoke of the need for bishops to earn the trust of Catholics and to see the protection of young and vulnerable “not just a duty but a calling.”

He urged them to continue to listen to victims but also to priests and seminarians noting that so many priests today are hurting — going through the trauma of 2002 once again. “Some are demoralized, while others are feeling angry or betrayed. Many are simply worn down with the burdens of ministry, the clergy shortage and the suspicion under which they live.”

Archbishop Pierre also said that in the midst of the current crisis, which has been “painful and humiliating,” media reports can convey that the church has done very little. This is “simply not true” and should be refuted, he said.

Moving on, the work for the U.S. church leaders is to cry for injustices done and “fight a clerical culture that tolerates the abuse of authority.”

He also noted that the media is not to blame for reporting the crisis.

“These are not sins of the media or the products of vast conspiracies. These are things we must recognize and fix,” he said.

The nuncio, in closing, urged the nation’s bishops to be aware of his own prayers and solidarity with them “at this difficult time” and also to know they have the prayers and support of Pope Francis.

“We cannot be daunted or held back by the challenging task; rather we must be concerned with the people and mission entrusted to our care,” he said, adding that “even in small victories and experiences of grace and healing” brings hope.