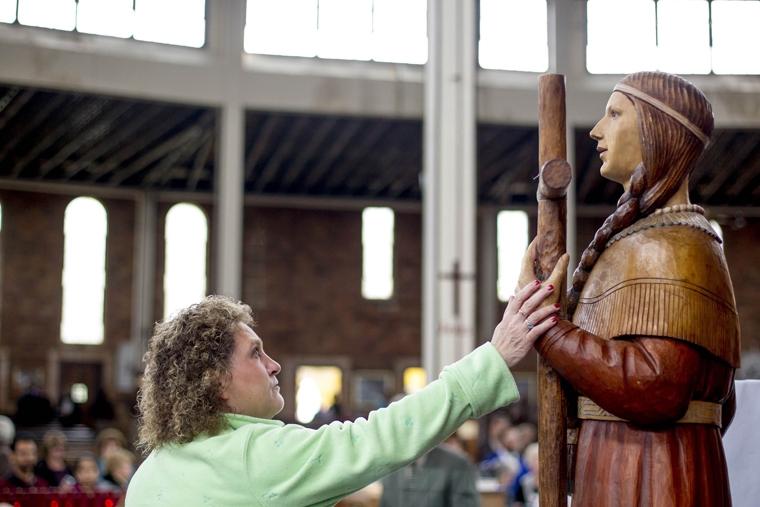 The Shrine of Our Lady of Martyrs in Auriesville got an unexpected visitor April 26: Archbishop Carlo Maria Vigano, the Vatican’s apostolic nuncio to the United States.

“He came unannounced,” said a still-surprised Joseph Caruso, a retired radio broadcaster who’s heading up a $1 million fundraising campaign for the shrine, which marks its 130th anniversary this year.

Caruso said the nuncio arrived at the shrine at about 3 p.m. and stopped at the gift shop, walked around the 400-acre campus, went down to the coliseum where outdoor Masses are celebrated, went to confession and inquired in the office about getting more information on the shrine.

Later, he called Caruso for information, as well.

“I asked what was going on,” said the fundraiser, who had previously pleaded for Pope Francis to visit the shrine during his September trip to the U.S., but has not been able to confirm a papal visit.

Caruso said the nuncio’s secretary characterized Archbishop Vigano’s stop at the shrine as “an apostolic fact-finding mission and visit,” but did add, “I’m sure we’ll be seeing you again.”

“It may be nothing, but I’m hoping for something,” Caruso said. “I have to believe it can’t be coincidental that this guy drops in on a Sunday afternoon.”

The Auriesville shrine, also known as the Shrine of the North American Martyrs, stands on the site of the 17th-century Mohawk village of Ossernenon, where St. Kateri Tekakwitha was born and Ss. Isaac Jogues, Rene Goupil and John Lalande were martyred. A pilgrimage site since the 1800s, it is currently run by Jesuit priests.

Last year, the shrine kicked off a fundraising campaign that organizers said was a desperate bid to save the facility, which offers Masses and novenas and hosts special events like a celebration of St. Kateri’s 2012 canonization. The number of visitors to the shrine has dropped over the years; its buildings needed massive repairs that the Jesuit order is unable to fund.

Since the fundraising began, the Knights of Columbus — locally, statewide and overall — have offered $650,000. The roof and windows of the coliseum, which seats 10,000 worshippers, have been replaced; the interior has been painted.

“Then we ran out of money” for a while, said Caruso, noting that the shrine’s St. Kateri chapel needs repairs, and its ravine — where the body of St. Rene Goupil was left after he was killed — needs a bridge fixed and 20 trees removed.

But Caruso believes that, by the end of this shrine season, a total of more than $2 million will have been raised. Already, he said, the shrine has received checks from people in 27 U.S. states and 35 countries. A radio telethon is planned for July 11-12 to raise more funds.

That doesn’t solve the problem of whether the Jesuit order can continue to staff the shrine, or whether the number of visitors will increase. But Caruso noted that a check presentation by the Knights of Columbus scheduled for early June will be attended by Cardinal Timothy Dolan of the New York Archdiocese and supreme knight Carl Anderson of the Knights of Columbus, among other dignitaries.

The fundraising chair believes this means interest in the shrine is on the rise. Vice President Joseph Biden, he said, has also inquired about visiting this year; a papal visit can’t be ruled out.

This piece first appeared in and appears here courtesy of The Evangelist, the newspaper of the Diocese of Albany.