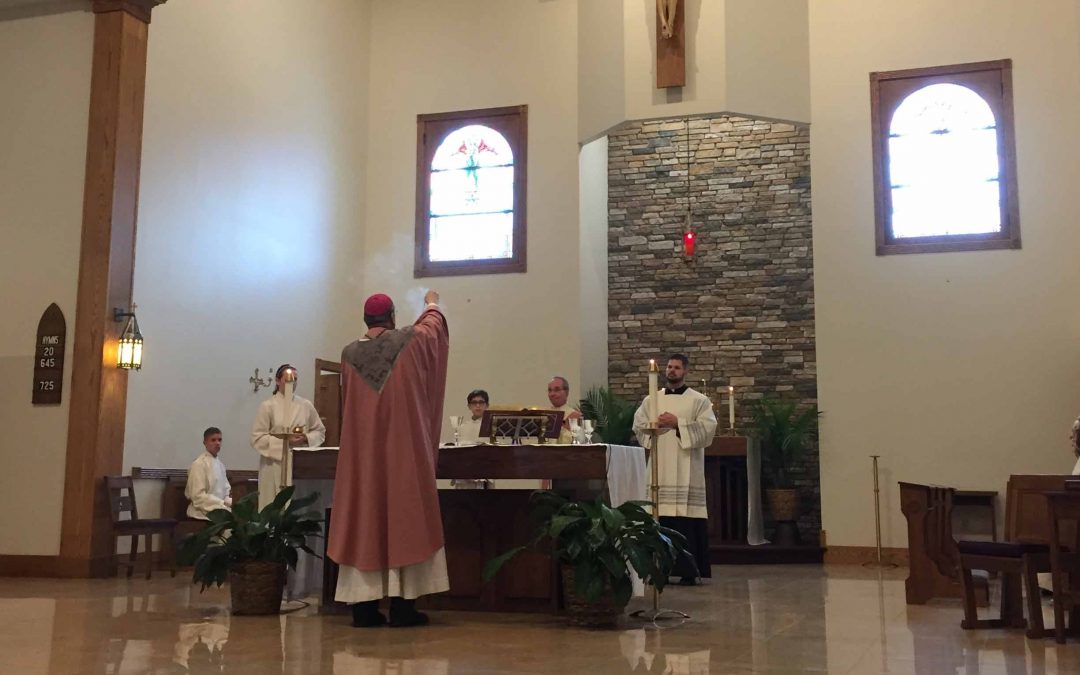 Our Lady of Sorrows Church in Vestal celebrated its 75th anniversary last weekend, and Syracuse Catholic Television paid a visit to the parish and pastor Father John Kurgan to learn more about the Our Lady of Sorrows community. Excerpts from their conversation, edited for length and clarity, appear below — be sure to watch the Dec. 28 episode of “Around the Diocese” for the complete interview.

Tell us about the faith community here at Our Lady of Sorrows.

The community was started back in 1941 from St. Ambrose Church, the mother of all the churches in the Southern Tier. At that time there were so many people, many new churches were begun, and Our Lady of Sorrows started as a very simple country parish and sort of evolved into what we see now is a tremendous, 1,500-family, very vibrant parish, lots of young families, that are very devoted to mission, to the idea of taking care of the impoverished of the area. We have a Mary’s Meal program that started in the last year or so that feeds the hungry twice a month, as many of the parishes do in the area. Really it’s something that has taken root and shows us how important it is to continue to grow the faith life. It’s not something that’s stagnant, it’s not something that has just sat still; it continues to evolve with each new generation, which is wonderful to see.

What makes Our Lady of Sorrows a unique and special parish?

One of the things that’s so unique about it is that, like most parishes, we have a fairly significant older population, but there’s tremendous involvement that they have in support of the youth…. There’s a good melding of those communities.

The other thing is the sheer number of volunteers, to be honest with you, astounds me. When I came to the parish, Father Putano [the previous pastor] had done a tremendous job of getting involvement from groups and prayer groups and ministries people could be involved in…. Most of those are still active to this day, and with lots of people in them. One of the groups has over 100 volunteers in it or people that are active in it, and not always the same people in all the groups. It’s a nice diversity of people and we continually see that grow also.

Our Lady of Sorrows marked its 75th anniversary last weekend. What does this anniversary mean to and for the parish? How did you celebrate? What do you envision for the next 75 years?

To the parish, certainly it’s a milestone. As you know, we opened this church — the third church the parish has been located in in the last 75 years — because of growth. Building has continued. That was a major celebration, but I think the 75th is just as important to us, because we have a few parishioners with us still that were baptized in 1941 when the church was opened. They’re still active in some cases; they’re going to be able to keep participating. As one of them said, “75 doesn’t mean the end for me.” …. For myself, it’s an honor to be here to see the excitement.

We celebrated by having a wonderful Mass at 11 o’clock that Bishop Cunningham celebrated…. Father [Zachary] Miller was able to be with us, who is a son of the parish and was ordained a couple of years ago, so there’s always of course great excitement when he is able to be here. We also had Friday evening a wonderful dinner in celebration of the 75th and that was capped off by a concert that we opened up to the entire Southern Tier, a free concert given by David Kauffman…. Saturday morning David led a lexio divina workshop and a journaling prayer workshop.… And Sunday, after the bishop’s Mass, there was a reception and then we had our annual Christmas cantata, which incorporates about 60 of the local parishioners.

A couple of the little kids, in talking to this parishioner who was around 75 years ago, was baptized when the church was opened, said, “Well, we’ll be here, and we’ll do something for the next 75.” And everybody sort of laughed. But you wonder — a couple of these kids are 4 or 5 years old. There’s a very good possibility they could be here in the next 75 years…. I think that’s one of the threads that goes through any of our parishes — it’s not particular to Our Lady of Sorrows; it’s particular to our diocese and to our faith — is the fact that that’s really what unites us together. It doesn’t matter whether we’re here in Vestal or where we are across the world, it’s that faith unites us together throughout time.