Parish swoops in with honor for late paratrooper priest 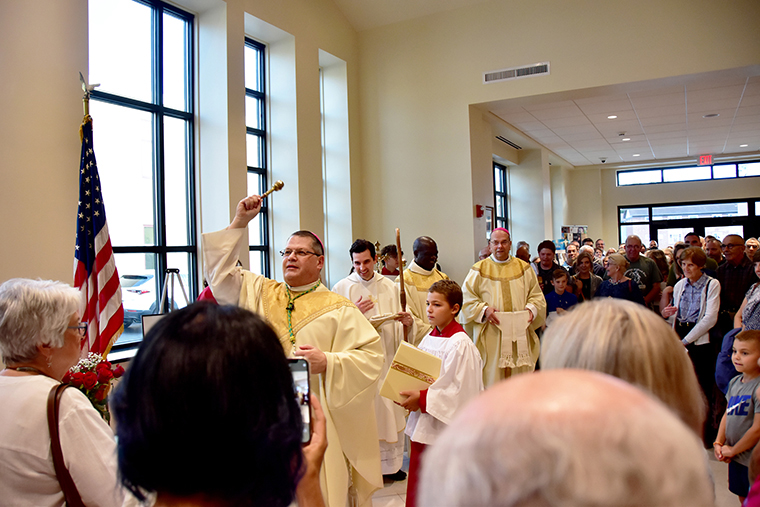 He shunned personal glory but the parish insisted, and two bishops blessed the event.

The Father James Kennedy Room, a new entryway into the church, was dedicated Aug. 23 at St. Rose of Lima in North Syracuse. Calling it the Msgr. James Kennedy Room would have been accurate but against the humble ways of the late honoree; he put away his monsignor robe right after he got it and he also mothballed “Msgr.”

“When I told people we were naming it after Father Kennedy, I said, ‘You know, I couldn’t have done this if he was alive,’” recalled the pastor, Father Christopher Celentano.

Father Kennedy was the “people’s priest. Like players’ coach,” Father Celentano explained; Father Kennedy wanted the attention to be on the Lord, not on himself. That’s why even when he couldn’t walk anymore, he would grab his walker, get the Blessed Sacrament, get in his car and “drive over a couple of streets to go visit somebody who was in worse shape than him,” Father Celentano said.

Father Kennedy, a priest of the Diocese of Syracuse for more than 65 years, died Dec. 31, 2020, at the age of 91. His ministry included 25 years as pastor of St. Rose. His military-chaplain service included two tours in Vietnam, and he completed more than 100 jumps with airborne units. Lt. Col. Kennedy retired from the U.S. Army Airborne Paratroop Division. “He never talked about those things,” Father Celentano said. “People sometimes would inquire, and he might tell you a little bit here and there. But he carried himself in such a very approachable way, just a very welcoming guy.”

‘Those guys were humble’

So how do you stay humble when everybody likes you?

“He’ll pop in, say hello, boom, then he’s gone — wshooo,” said Father Celentano. “That’s the way that that generation rolled; those guys were humble like that. … Several guys that I’ve known from his generation, it’s almost like they’re irreplaceable. Just quality — good, try to be holy. They’re not lookin’ for anything fancy, they’re simple. If you call them at 2 in the morning, if he’s 38 or 88, he’s showing up at your house. If you need him he’s there for you. If you’re down on your luck, the kind of guy he was, you’re down on your luck? He’s gonna take care of ya.”

Father Kennedy certainly wasn’t looking for a fancy new church entryway in his name. It is elegant but simple, the way his generation rolled. It was added to the building — a totally new space — so that people can greet one another before they enter the church proper for Mass or other events. Included are statues that stand next to votive candles. A welcoming table greets people before and after Mass. Other possible uses are baptisms, receptions and a place to get Mass cards.

Bishop Douglas J. Lucia, one of the concelebrants of the dedication Mass along with Bishop-emeritus Robert J. Cunningham, sees the new space as a place to begin a Palm Sunday or an Easter Vigil ceremony; and to gather after Sunday Mass for socializing with coffee and doughnuts or other treats.

Marked with a rose

Attendance at the dedication Mass, celebrated on the Patronal Feast of St. Rose of Lima, warmed the heart of Father Celentano — hundreds of people gathered in the three sets of new pews that were installed in January. The image of a rose is carved into the end of each pew, thanks to computer technology.

After the Mass a crowd gathered to watch Bishop Lucia bless the Father Kennedy Room with holy water.

“After much work and prayer by so many members of our parish,” Bishop Lucia told the assemblage, “we gather now to bless and dedicate this new hall dedicated to the memory of Father James Kennedy. It will be a center for our parish activities and place where we may come to know one another and give witness to our faith in Christ.”

Bishop Lucia prayed for the peace of Christ to move in the people’s hearts. “And may the word of Christ dwell in you,” he said, “so that all that you do in word and in works, you will do in the name of the Lord. And may almighty God bless each person here and those who will gather in this space; the Father and the Son and the Holy Spirit.” The onlookers said amen.

Father Kennedy “inspired people,” said St. Rose Deacon Bill Wilson. “He’s actually the reason I went into formation for ministry,” an early step on the road to the diaconate.

“He was a blessing for this community,” Deacon Wilson added. “He touched everybody that he interacted with. … He didn’t want to be the center of anything; he wanted to be just part of everything.”

Asked if he thought Father Kennedy is embarrassed from above by the honor bestowed, Deacon Wilson said: “No. How could you be embarrassed in heaven? He would have been thrilled with the fact that his family was here; that would have meant everything to him.”

The refurbished main hall in the church basement has classrooms around the edges. Susan Duerr, a parishioner for 44 years and a member of the Finance Committee, recalled Father Kennedy as an honest pastor who loved God and had a great sense of humor: “It was wonderful to be in his presence, he was very calming.”

She said the downstairs space had not been renovated in 20 years since her children attended school there. There is going to be a kitchen down there that might serve people after a funeral service, she said.

Father Celentano views St. Rose as a vibrant parish going back to its inception. But “when you walked in here,” he said, “the church used to look like it needed love. It looked like at one time it had been loved and for a while, they did the best they could, but [it] needed … some attention.” Issues included the roof, electrical problems, heating, duct tape on windows, air conditioning and doors. And if the people of the parish were going to go out and evangelize, where would they bring people to?

So the Father Kennedy Room became part of a big renovation project at the church, with Daniel Manning as the architect. Ed King, manager of facilities and construction for the diocese, helped manage the project with Father Celentano, thereby saving money that would have gone to a general contractor.

“And that allowed us to do a lot,” Father Celentano said. “In fact, we got most of our wish list done. So we had aimed to get $1.75M, knowing that things would cost a little bit more, and we’re projecting by the time the campaign finishes in three more years, we’ll have $2.73M. And people have been incredibly generous and faithful to both their one-time gifts and their pledges. … Today was a great joyful celebration. We’re not 100 percent finished, but finished as we needed to be in order to get using the building.”

Sidewalks near the entrances all have heat now. The church had been built in an era when ambulatory issues were not on people’s minds, so Fergerson Funeral Home stepped forward and paid for a commercial elevator that can even be used for funerals if there are no pallbearers, Father Celentano said.

In the Father Kennedy Room, he said, “we want you to feel welcome or welcomed. And there’s lots of light in there, it’s a beautiful design.”

“Thank you, Father Celentano, for all your work here … along with your parishioners,” Bishop Lucia said. “I know it’s blood, sweat and tears for all of you, but thank you very much for continuing to renew — renew this house of prayer; but that’s so that we can go forth from here to literally renew — renew our city, renew our world and most of all renew our diocese.”