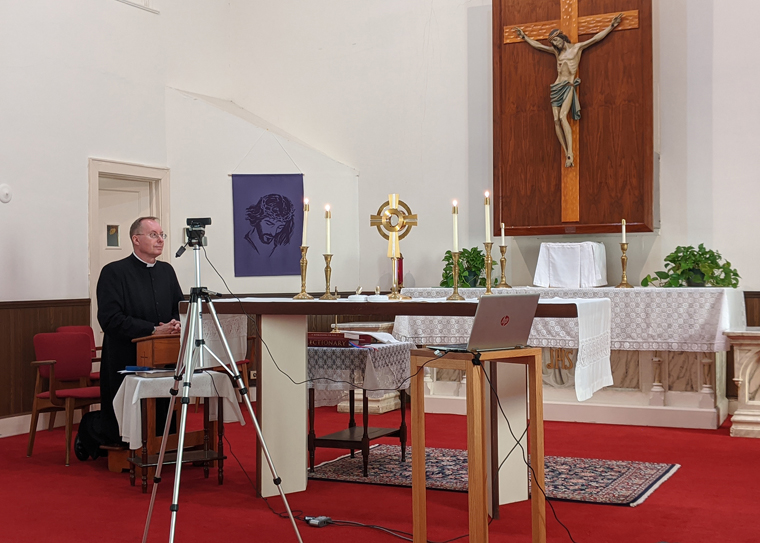 WASHINGTON (CNS) — When U.S. dioceses first announced they were not offering public Masses in an effort to curb the coronavirus, many dioceses promoted TV Masses broadcast in their areas or arranged to tape their own Masses and post them online.

But by the second weekend without public Masses, parishes around the country stepped up to the digital platform and were opening their churches, virtually, to their parish communities and the world.

Some videotaped Masses in small chapels, others taped in parish churches and some placed pictures of parishioners on the pews. Some Masses included lectors and music; others simply involved a parish priest. Some parishes seemed to just tape the Mass on a smartphone while others were more high-tech with a camera on a tripod. Masses were available in one language or multiple languages.

For many parishes, this effort meant setting up a parish YouTube channel for the first time or dusting off their Facebook page for online streaming. Some parishes tapped into their younger members with sudden time on their hands and online skills to make this happen.

Father Paul Keller, a Claretian Missionary priest, serving at St. Paul Catholic Newman Center Parish in Fresno, California, said once the coronavirus restrictions were in place, the parish made plans to livestream Sunday and daily Masses.

The parish has online giving that also involves a way to get texted donations and it has been sending email blasts to parishioners with online spiritual resources for this time. The parish also is planning to conduct interviews, with questions submitted online, with parish leaders on Facebook Live.

Not every parish may have been this prepared for this current crisis, but even the ones that weren’t have made their online presence known and available, at least with online Masses.

One example is Father Ken Gill, pastor of Our Lady Star of the Sea Parish in Solomons, Maryland, who met with his parish staff after the diocese announced that there would be no public Masses as of March 14 and asked them: “What can we do to stay connected?”

They decided that with the proper equipment, the parish could begin livestreaming Masses so the pastor went to Best Buy and for about $750, bought a laptop, a microphone and a camera, and a parishioner helped him set up the connection to livestream a daily Mass March 18.
He told the Catholic Standard, newspaper of the Archdiocese of Washington, that he was a little nervous since it is one thing to preach a daily Mass for the parish and another thing with your words “going out to the world.”

But since that debut, he also has been broadcasting a noontime holy hour, praying the Angelus, the rosary, the Divine Mercy chaplet and benediction with viewers. On March 19, he prayed the rosary via livestream in the church at the same time as Pope Francis had encouraged Catholics in Italy and around the world to do so. He also planned to livestream a children’s Stations of the Cross and a Stations of the Cross for adults accessible on the parish Facebook page.

“We’re using this opportunity to foment and create a stronger bond of community,” he said.

In Gaithersburg, Maryland, about 85 miles north of Father Gil’s parish, Father Agustin Mateo, pastor of St. Rose of Lima, emailed parishioners March 21 about the parish’s plan to livestream the next day’s Mass on the parish YouTube channel.

“This is uncharted territory for us. We pray that our technology will be working for us so you can be a part of this most sacred mystery,” he wrote.
The parish successfully broadcast Masses in Spanish and English, which gathered more views in days after they were livestreamed. In his homily, Father Mateo said that we don’t always see “daily miracles of God’s grace in our lives until our lives are turned upside down as they are now.” At the end of Mass, he spoke to the online congregation about holding onto God for strength in this time when many feel hopeless or that so much is out of their control.

The parish, which took its chance on technology, was hardly alone.

On March 22, Mary DeTurris Poust, director of communications for the Diocese of Albany, New York, tweeted that she was watching multiple livestream feeds in the diocese. “I’m amazed. Some have 500 people watching at once, some 250, some only 30, but when you put it all together you realize we are still connected, still one body.”

And in an email to Catholic News Service, she said she was “amazed and inspired” by what has been happening in parishes.

“Even those that have never attempted livestreaming or Facebook are doing whatever they can to reach out to their parishioners — even if it’s simply a cellphone on a tripod for video purposes,” DeTurris Poust said. “I think it’s because they know their parishioners are desperately hungry for spiritual connection and for the grounding nourishment liturgy can provide at this really critical and chaotic time.”

She said the daily web traffic in the diocese was up 1,750% in mid-March with its highest concentration on the link for TV Mass and the other for coronavirus resources. “The website is becoming a lifeline for local Catholics,” she added.

DeTurris Poust said she spoke to the U.S. bishops in 2012 about the importance of social media in evangelization and told them at the time that Facebook was “the new parish hall.”

“Today, at least for the short term, Facebook is the new parish church. It is where we are gathering. I was watching people write the Mass responses in the comment sections of livestreams. They weren’t just watching; they were participating as best they could.”

On Twitter, families posted pictures of themselves watching Mass and one person said their child was still bad “at Mass,” even though they were in their family room and some priests posted photos of setting up for taping. These posts gave the sense of community, even without the doughnuts after Mass or the traffic jam in the parking lot afterward.

Paulist Father Larry Rice, director of the University Catholic Center at the University of Texas at Austin, which is currently posting daily and Sunday Masses on its Facebook page, said it would be a mistake at this time to use technology to feed fears or spread rumors when it can be used to “reinforce bonds we can’t reinforce physically.”

He said that during this time of social distancing, people also should make use of tools such as Zoom video conferencing, which he has been making a point of using with family members “just to get together and talk.”

Michael Bayer, director of evangelization and adult formation at St. Clement Catholic Church in Chicago, has been putting together a list of all the online Masses available throughout the country which will soon be available on the website that volunteers are helping him with — withyourspirit.org.

He told CNS that he thinks parishes are setting up livestreams “because they recognize that the church, that is the communion of believers, is experienced first and foremost through the local community. It was true for the earliest Christians who met in small gatherings and it is true for contemporary Catholics who have established relationships with their local priest and with other families whose kids are enrolled in religious ed or the parish school.”

He said much of the public coverage of the coronavirus focuses on international, national, or statewide responses with statements from government officials and abstract statistics about the percentages of those affected with the virus.

“But there is something about humanizing this experience by wanting to check in on and be in community with the people you know personally — friends, family and members of your parish,” he said.