People of faith have found that pilgrimages, journeys to sacred places 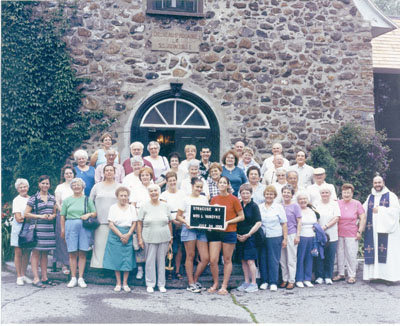 to receive spiritual benefit, separate them from the cares and concerns of day-to-day life. Traveling to a holy place often brings new spiritual insight and hope.

The first Christian pilgrimages were made to the Holy Land and Jerusalem in the fourth century, when they were encouraged by church officials like St. Jerome and established by Helena, the mother of Constantine the Great. Afterwards, pilgrimages were made to Rome and other sites associated with the Apostles, saints and Christian martyrs, as well as to places where there had been apparitions of the Virgin Mary.

In the Middle Ages, people were encouraged to make pilgrimages to special holy places called shrines in the belief that if one prayed at a shrine, one might be forgiven for one’s sins and increase one’s chance of going to heaven. Others traveled to the shrines hoping to be cured of an illness.

Father John Mikalajunas, pastor at Holy Trinity Church in Utica, has made pilgrimages to 20 countries in the last 37 years. He will be taking his 12th trip to Poland September 24 and will be visiting the shrines of St. Faustina, Divine Mercy and St. Maximillian Kolbe and Our Lady of Czestochowa.

Father Mikalajunas said that making the pilgrimages has greatly enhanced his priesthood. “It’s been a beautiful experience,” he said. Some of the other places he has traveled to include Rome, Italy, the Shroud of Turin in Italy and the Basilica of Our Lady of Guadalupe in Mexico. “It was wonderful to see the Mexicans dance and sing in front of Our Lady,” said Father Mikalajunas.

In addition to enhancing one’s spirituality, a pilgrimage affords one the opportunity to travel to the area of one’s ethnic background and to learn about different cultures. “On the pilgrimage, we come together with people from many other places, and when we come back home we share what we learned,” said Father Mikalajunas. “When we’re there, we have these touching moments where we see ourselves as one, big, Catholic family.”

Johanna Casey, a parishioner at Church of the Holy Trinity in Binghamton, spoke of that feeling as she reflected on the pilgrimage she made with Father Mikalajunas to Rome, Italy in 2005. “I got the feeling that we were all one people as I stood within the courtyard of St. Peter’s Basilica with crowds of people from all over the world,” said Casey.

Casey said she was in awe when she had an audience with Pope John Paul II in Rome. “It was a very joyous and uplifting visit,” she said. “There was a lot of singing and laughing and the pope was smiling and laughing, too. There are no words to describe the feeling.”

Casey said she also visited the Shrine of Padre Pio in San Giovanni Rotondo, Padua. “It was very moving to see the confessional where Pio had heard confessions,” she said.

Patricia and Michael Kritkawski, parishioners at St. Thomas Aquinas in Binghamton, have also made a number of pilgrimages with Father Mikalajunas.

Patricia said that when she and Michael visited the Shroud of Turin they weren’t prepared for what they felt and saw. “I had no doubt that it was his image, especially when I saw the thorn in the eye of Jesus,” said Patricia.

Patricia, reflecting on the pilgrimages she and her husband have made, said that witnessing the Passion Play in Oberammergau, Germany was instrumental in building her faith. “It will be embedded in our minds forever,” she said. “I recommend it to anyone.”

Lucy Van Dyke, parishioner at St. Michael/St. Peter in Syracuse, is planning her 28th pilgrimage to the Basilica of Sainte-Anne-de-Beaupre, set along the St. Lawrence River in Quebec. The basilica is known for the intercession of St. Anne in performing miracles, including curing the sick and disabled.

St. Anne is the mother of the Virgin Mary and the grandmother of Jesus.

Van Dyke is organizing a bus trip to the shrine and there are still spaces available for anyone who is interested in going. The bus will leave Syracuse July 23 and will return July 28.

Van Dyke explained the itinerary of the trip. It offers numerous spiritual activities as well as free time to explore Quebec and Montreal.

The first stop will be at St. Joseph’s Oratory in Montreal and then the travelers will stay overnight in Cap de Madeleine, Quebec. The remainder of the pilgrimage will be spent at Saint-Anne-de-Beaupre. They will celebrate the feast of St. Anne on July 26 at the shrine.

The basilica in Sainte-Anne-de-Beaupre was initially built as a shrine to honor St. Anne, who was proclaimed the patron saint of Quebec in 1876.

The basilica is the centerpiece of a large complex, which includes chapels, a holy well, Stations of the Cross and a replica of the Scala Santa (Holy Stairs) in Rome.

Van Dyke is following in her mother’s footsteps in organizing the pilgrimage every year. Her mother was in charge of the journey to Quebec for 40 years before Van Dyke took over the responsibility. “My mother had a devotion to St. Anne,” said Van Dyke. “She asked me to take over before she passed away.”

Van Dyke is reminded of her mother when she makes the pilgrimage each year. “It’s a wonderful experience,” said Van Dyke. “It gives me inspiration to see the handicapped make such an effort to attend. We’ve seen many miracles. Many wheelchairs and crutches have been left behind. It’s beautiful — I love going. I enjoy being there with St. Anne.”

Carmela Chartowick has been making the pilgrimage for many years and intends on going again this year because she enjoys the experience. She is a parishioner at St. Margaret’s in Mattydale.

“I come back from it spiritually renewed,” said Chartowick. “I love the beautiful chapel — the artwork, statues and the history of the miracles. I feel a calmness when I’m there.”

Chatowick said that when the group stops at Cap de Madeleine, they participate in a prayerful, candle-lit procession around the perimeter of St. Mary’s Lake in the center of which a statue of the Blessed Mother is situated. “It’s absolutely mesmerizing,” she said.

“The area of our pilgrimage is so beautiful,” remarked Chatowick. She said that she especially enjoys visiting St. Joseph’s Oratory in Montreal. “When I visit, I stand on the balcony and I can see almost all of Montreal — I’m drawn to it because of its history,” said Chatowick.
The inspiration for St. Joseph’s Oratory, Brother Andre Bessette, CSC, will be canonized on October 17 this year. Brother Andre will become Canada’s second native-born saint.

Chatowick said she likes the opportunity to go off by herself while on the pilgrimage. “I can absorb everything better,” she said. “I like to use the quiet time for meditation. When I return home I bring a sense of calmness.”