Pilgrims say no regrets about Holy Land trip, despite coronavirus 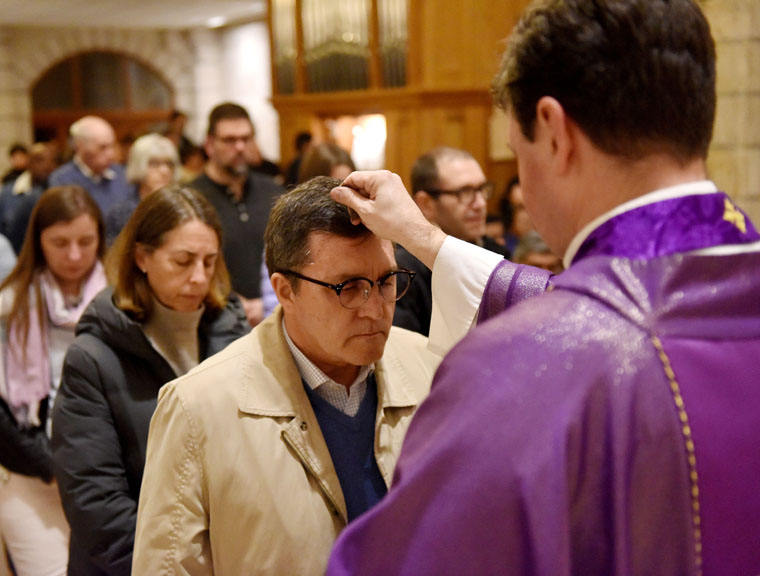 JERUSALEM (CNS) — Amid continuing concerns about the spread of the coronavirus, Catholic pilgrims in the Holy Land said they were being cautious but had no regrets about continuing with their pilgrimage.

“I may have considered canceling a trip to another country, but this won’t stop me from coming to the Holy Land,” said Zach Abdallah of Sacramento, California, just before the start of the Ash Wednesday evening Mass at Our Lady of Peace Chapel in the Pontifical Institute Notre Dame of Jerusalem Center Feb. 26. “This is being in the flesh in places where Jesus was. I came because I wanted to deepen my faith. Being here on the first day of Lent, in the Holy Land where Jesus wept over Jerusalem was very emotional.”

Earlier in the week, Israel announced that members of a pilgrim group from South Korea had tested positive for the virus, COVID-19, when they returned home following their weeklong pilgrimage.

Though some dioceses in different countries where the virus has become more widespread have canceled public Masses, including for Ash Wednesday, there has not been any such directive in the Holy Land, said Father David Steffy of Detroit, vice director of the center. He celebrated the Mass at the chapel.

“What we try to do is follow what the bishop (says) and then what in general is being accepted or not accepted behavior as a church,” he said. “We want to be very aware that we are part of a social situation and be respectful to those social considerations that come in.”

As the chapel filled with guests from different countries and Catholics living in Jerusalem, many of the worshippers dipped their fingers in the holy water font. During the sign of peace, everyone shook hands, and people took Communion by hand and by mouth. In distributing ashes, Father Steffy and Father Cristobal Vilarroig drew crosses on foreheads, but also sprinkled the ashes on people’s heads as they signaled their preference.

“We all need to be very aware of how we are feeling in so far as our health … and be respectful even more so now,” Father Steffy said. The center put out hand sanitizer for guests, he said, and he noted that some guests are wearing surgical masks.

Maria Ludy of Raleigh, N.C., said she had been conflicted before coming on a pilgrimage with her husband and joining a group here, but said in the end her desire to be here at the beginning of Lent overcame her concerns.

“I assessed that I was coming to a country which is paying attention to the crisis and is acting appropriately … and has (good) medical treatment if I need it,” she said. “At all the sites I tried to stay away from different groups. I was happy that we were able to visit the Church of the Holy Sepulcher and have Mass there very early in the morning.”

While she has still been shaking hands during the sign of peace at Masses, she said, she also has been washing her hands “25 times a day” after touching anything ranging from door handles to menus.

Ludy stayed for the start of the Mass, but as more people began filling the chapel, she decided to leave.

“I told my husband I would come early to assess the situation and, if it did not feel safe, I would leave early,” she said.

Surgeons Carlos and Marta Candanedo, who are originally from Panama and Nicaragua and who are completing their medical specialization at Jerusalem’s Hadassah hospital, said they were not concerned about the virus.

“Not coming to Mass because of the virus never crossed our mind,” said Carlos Candanedo. “It is a priority. We took off from work early to come here.”

Father Steffy said that, during Lent, the coronavirus outbreak could be seen as an opportunity to recognize human weaknesses and susceptibility and see what is most important.

“When people care, share their goods and look toward the needs of those who are lacking, that tends to bring out a sense of service to others,” he said. “These moments where there is a little bit more of crisis” can help people better understand “people living in crisis (situations) we don’t realize or are ignorant of.”